Crashing cars runs in the family at Orlando's Tour of Destruction

Cars exit the track into the pit area after their race. (Orlando Speedway, Nov. 29, 2019) Photo by Christopher Balogh

A teary-eyed, middle-aged father runs up the inclined entrance of Orlando Speed World's pit area. The cigars in his front shirt pocket bounce as he approaches the circular track to see a crashed school bus lying on its side. His other son stands next to him, rubbing his father's back. Then the driver of the toppled bus climbs out and stands atop, visible as a silhouette in the stadium lights. He throws his hands in the air to signal to the crowd that he's alive. The crowd cheers. The father lets out a shaken sigh.

The Tour of Destruction is put on a quick pause while construction loaders and lulls pull aside the fallen school bus and other debris. The driver walks off, seemingly unscathed. The estimated 7,000 viewers in attendance settle down. The buses line up. Engines roar. They begin again.

THE CRASHOLOGIST
"You never know what's going to happen," says George "Moe" Knauer, the event operator of the Tour of Destruction. "We try our hardest to keep everyone safe. We take as many precautions as we can. These competitors are terrific people and we want to take care of them."

For Knauer, some of those terrific people are family. His 32-year-old son Kevin runs the Gauntlet, a Mad Max creation of a vehicle. The main objective of the Gauntlet: Take it down. Up to 10 cars for 10 laps at a time try to stop this Frankenstein with wheels. One of the people trying to take it down is the Gauntlet driver's 30-year-old brother, John.

"My whole family is part of this," says Knauer. "Whether they are in the races or behind them." Knauer's wife works in admissions and their eldest son, Keith, is the announcer and runs the website.

"I used to be in these types of races. I ran in the derbies," Knauer says. "It all started for me when I was 16 years old, and it escalated to where I am now. I don't consider myself a promoter – that word can sound negative sometimes. My wife says I'm a crashologist."

Knauer, a Long Island native, moved to Orlando over 20 years ago for his wife's job transfer. Since then, he's been tied to racing. For the past nine years, he's been running the Tour of Destruction, formerly known as Crash-a-Rama. It's bloomed into a touring circuit now, traveling within Florida, North Carolina, Virginia and Tennessee – but it all started at Orlando Speed World, nestled in the sleepy town of Bithlo.

"We have been improving the race every single year. I'm always trying to think of new races or new ways to keep the event going," Knauer says. "For next year, maybe a car standoff, one on one. But the big one would be getting a 100-car demolition derby. Back in the day, it used to be done all the time. And not so much anymore. I'd like to bring that back."

He continues, "It has to be smooth and continuous for it to be a good show. This is entertainment. I can't let there be lulls for the audience to get bored. That's why we've incorporated the rodeo clown. I also placed the fireworks in the middle of the show, just to keep things going. I have to give the audience their money's worth and then some." 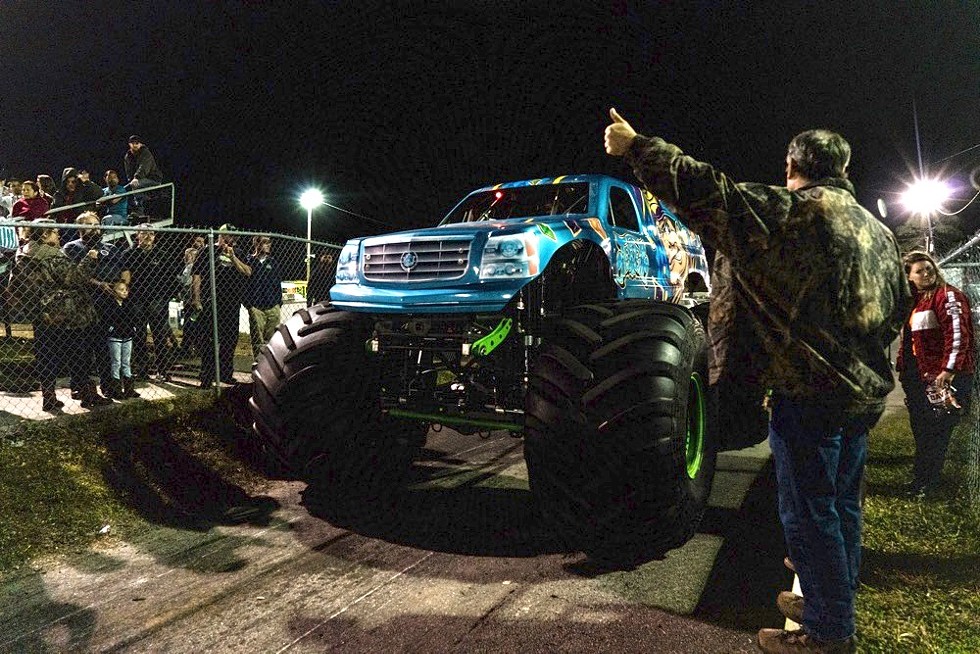 GROWING UP MONSTER
In the pit area, a VIP admission ticket throws the audience behind the scenes. That's where you can see the chaotic ballet of junkyard cars, minivans, school buses, and cars towing boats orchestrated like a well-oiled machine. Cars line up for the next race. Behind them, the monster truck team checks temperature gauges. Loaders and lulls pick up recently demolished cars from the track and send them down the entrance/exit hill. Race staff ride around on their ATVs checking up on racers. Paramedics and an Orange County Fire Officer wait on the sidelines.

The pit-area crowd walks through it all, holding their hot dogs and beer. Sometimes they take a break and get a selfie with one of the monster trucks. The most popular one of the night: the Kraken, a neon-green monster truck with molded bodywork in the shape of a giant squid. Next to the Kraken sits the Jester and Lil' Bully. All three are driven by the Pagliarulo family, from Sanford.

The Pagliarulo patriarch, Matt, drives the Jester, a blue Escalade with 66-inch tires, a 540 Chevy big block engine, and a smirking court jester painted along the side. Matt's 20-year-old son, Nick, takes the reins on the Kraken, which has the same specs, but with molded bodywork that makes it appear that the truck is being swallowed by a giant squid. Then there's Lil' Bully, a mini monster truck with a graphic of a gangster-dressed kid. But the car sends a message: The name "Lil' Bully" is crossed out, and painted-on tags read "No more bullying."

Lil' Bully is driven by Nick Pagliarulo's 12-year-old sister, Brooke. She shares it with her older brother Michael, who is behind the scenes at tonight's event. Time for the 12-year-old to shine.

"I'm not worried about her. She's just going through all checks and gauges," Nick says as he watches his sister try to strap in her helmet and conduct the pre-drive checklist. "She's only done it three times. There really is no practice – this is our practice."

Nick runs over to his sister and helps her with the helmet straps, just being a big brother. Michael checks the dashboard. Dad Matt proudly watches his family at work while he waits at the side of the pit entrance for his daughter's arrival up the ramp to the track.

Even though the whole family seems Zen about the entire night, it's still fairly new to them.

"My dad started doing this all about five years ago," says Nick. "We all love it and grew up watching them. Then one day, we just started building our own. Then I got into it, my brother, and now my sister."

Nick says they consider it a sport. And just like any sport, you want to be on top of your game. However, to most, these stakes are a bit higher. Nick doesn't waver on that.

"The only thing I worry about is making sure I perform," he says. "I want to make the crowd happy and hear them cheer. After I do a stoppy [a nose plant] or a moonwalk [a nose plant in reverse], and I hear the crowd cheer, that's the best."

Brooke pulls Lil' Bully out onto the track as the rest of the family watches from the pit entrance. She makes her way to the center of the track to jump a dirt hill as the announcer amps up the crowd. The family notices that Brooke didn't put her entire hood down for the jump and half-giggle as she jumps the hill perfectly. The crowd cheers. The family laughs and yells in excitement.

Then, quickly, it stops. They realize the truck isn't moving anymore. Michael communicates on the headset with his sister – all is fine with her, but Lil' Bully needs a lift back to the pit area. None of the family members appear upset; there's more of a general "it comes with the sport" attitude. The workers on ATVs clean up the track for the next event: a minivan demolition derby.

IT'S A FAMILY AFFAIR
A line full of junked-up minivans waits for the fireworks show to end, post-apocalyptic mom vehicles revving their engines. In the first spot sits 18-year-old Hannah Graves. She moves a flap that sits on her front passenger seat.

"That's my battery," she points. A car battery sits on the seat, with wires running up into a hole in the front windshield, then underneath the hood. "I've done this a couple of times," she says. "My sister, Skylar, is in another car about four cars behind me. My dad got me into it. He runs a salvage yard in Zephyrhills. That's where we got this car."

Hannah is Buddha-calm, with an ear-to-ear smile. Fireworks light up her face under the helmet. Next to her on an ATV is her father, Jeremy. (He's one of the event staff members.) He smiles over to his daughter and then rides up to the top of the hill. She isn't fazed by what she's about to do: reverse at top ramming speed into other minivans.

A couple of minivans back sits Taylor Bosak. She grips the steering wheel as the last fireworks hit the dark sky.

Bosak won that very night, and she didn't take the moment for granted; she jumped atop her destroyed minivan while the crowd cheered.

These derbies have the innards of sports, with competition and skill at the forefront. Parents cheer on their kids, remembering their past with the sport and how they passed it down. It's still a place where destruction is at the core – it's the main goal. But parents can't help sharing the love for the shared experience of a family tradition with fire suits.

– This story appears in the Dec. 11, 2019, print issue of Orlando Weekly. Stay on top of Central Florida news and views with our weekly Headlines newsletter.