A canvasser for Que Vote Mi Gente registers a man to vote by mail. Photo by Monivette Cordeiro

Under the hot sun, María Merced Valiente stands with a clipboard in hand in front of a Bravo supermarket in Orlando.

For the past month, Merced Valiente and a group of mostly women have been slathering on sunscreen and going to bakeries, supermarkets, festivals, restaurants and neighborhoods to register Puerto Ricans and other Latinos to vote by mail. When she first started, she says groups of people would come up to her to see how they could get their ballot mailed, but the fever has since died down. To prove her point, she calls out to a man getting a shopping cart.

"Are you registered to vote?" she asks in Spanish.

Merced Valiente, who moved to Orlando from the island 22 years ago, says in recent weeks she's heard the same from a lot of people.

"This year, the sleeping lion has been awakened," she says. "I've heard a lot of people talk about being excited to vote. Puerto Ricans have been hurt this past year by what's happened on the island and what happens here. We have to vote so that people will respect us."

Merced Valiente and her fellow canvassers are part of Que Vote Mi Gente, a coalition of local Latino progressive groups working to rally Puerto Rican voters through registration drives, community outreach and the occasional caravana, a celebratory event that involves people driving cars and trucks down streets to get out the vote.

For the thousands of newly arrived Puerto Ricans in Central Florida, the first time they'll be allowed to vote in a presidential election is one where they might be a deciding factor.

The irony isn't lost on them. Despite being U.S. citizens, Puerto Ricans on the island can't vote for president or have a voting representative in Congress. And yet, they can fly 1,175 miles to Central Florida and settle in what political analysts call the "swing part of the swing state," potentially deciding the course of America's future. They are, as NPR's Latino USA host Maria Hinojosa calls them, "the most powerful Puerto Ricans in the world."

Aside from being one of the fastest-growing groups in Florida, Puerto Ricans are highly sought-after by Democrats and Republicans alike, says Aubrey Jewett, an associate political science professor at the University of Central Florida.

But organizers on the ground say this community isn't as homogenous as political campaigns would like it to be.

"They're not a lump," he says. "Each group has different needs and issues that are more important for them to talk about." 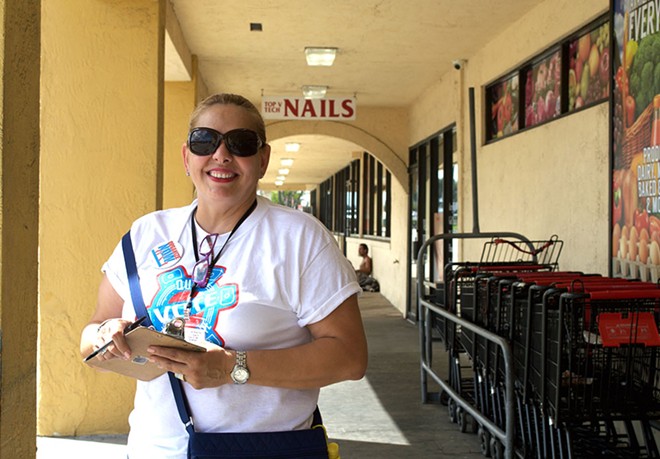 Velez says recent arrivals seek information about affordable housing, learning English, getting jobs and finding good schools. This group has gotten the most media attention. Thousands have left the island in a mass exodus that's been going on for about two years now, due to the ongoing financial crisis. The Puerto Rico Federal Affairs Administration has reported that as many as 1,000 families are moving to Florida every month, and their preferred location is Osceola County, Orange County and other counties along the I-4 corridor.

Data from the National Council of La Raza shows that recent movers are slightly more likely than other Puerto Ricans in Florida to have a bachelor's degree or higher, but 40 percent of them live in poverty – more than double the percentage of impoverished Latinos in Florida. While Puerto Ricans who moved to Florida know they can now vote for president, it's often lost on them that they can vote for a sheriff, supervisor of elections or school board member.

For Nuyoricans and other Puerto Ricans who've relocated from the Northeast, the challenge is showing them where to find community, Velez says. Unlike on the island or in large cities, Central Florida's Boricua community is separated into pockets in Kissimmee, St. Cloud and along Semoran Boulevard in Orlando. The droves of people leaving the island, coupled with Northerners moving south, have driven Florida's Puerto Rican population close to 1 million, with about 400,000 boricuas living in Central Florida alone.

The third group Velez concentrates on is those who've lived here at least a decade, including the first wave of Puerto Ricans who settled in the 1970s when Disney World opened. This group and their second-generation children are focused on the economy and making gains in the areas of higher education, wages and health care. Velez says another struggle has been reaching out to the millennial generation that, while interested in politics, is constantly occupied by work and school.

So far, his efforts have paid off. Velez says that, in three weeks, the Que Vote Mi Gente coalition registered 3,000 people to vote by mail by standing in front of bakeries and supermarkets and by knocking on doors.

Kaisha Toledo gave up her doctoral degree studies and moved to Orlando two years ago with her husband and son due to the island's financial crisis. Toledo, who also works with Que Vote Mi Gente, says this will be the first time she'll be able to vote for president.

"I want to do it in person the first time," she says. "We focus on Puerto Ricans here because we're the majority in Central Florida, but we're also voting to represent other Latinos, some who can't vote. I think this can be the beginning of awesome things for the Latino community. We have to unite."

Jewett says an analysis of Puerto Rican voters has shown that boricuas who move to Central Florida from other parts of the mainland are more reliably Democratic and less likely to be swing voters. Puerto Ricans coming directly from the island are not tied to traditional American political parties because they're unfamiliar with them, making them independents. While all Puerto Rican voters have concerns about the economy and jobs, Puerto Ricans who've lived in the United States for some time are also concerned with civil rights issues like discrimination, and some upper-middle-class Puerto Ricans tend to favor Republicans, Jewett says.

"Candidates that talk about issues the Puerto Rican community cares about tend to be rewarded," he says.

As an example, Jewett says former Gov. Jeb Bush did well in the Republican presidential primaries in March with Cuban and Puerto Rican voters in Florida because he addressed their issues and spoke fluent Spanish. When Donald Trump visited Osceola County for a campaign stop, he didn't address boricua voters at all.

"Technically, Puerto Ricans aren't directly affected by the immigration issue, but they, like many Hispanics, do take offense when they hear Donald Trump talking about Mexicans and illegal immigration," Jewett says. "What they hear is 'Trump doesn't like Hispanics' and 'Hispanics are criminals.' They're not applying that distinction because Trump doesn't either. It could create a big problem for him."

But Jewett says it's also not enough for Democratic politicians to focus on the issue of statehood or independence in Puerto Rico.

"Puerto Ricans have a lot of pressing issues," he says. "They want to hear about jobs, the economy, health care, education and minimum wage increases, because so many of them in Central Florida are in the service industry. It's a mistake to just talk about the ultimate future of the island. Much more savvy politicians talk about the bread-and-butter issues that concern all voters."

Aside from the drama going on in the presidential election, Jewett says Puerto Rican turnout this year could be increased both by activists trying to mobilize voters and due to excitement over the number of Puerto Ricans running for the Florida Legislature and Congress, including state Sen. Darren Soto, who is running to be the first Puerto Rican congressman from Florida in District 9.

Christina Hernandez, who was the Florida Hispanic vote director for Barack Obama in 2012 and is now working with Que Vote Mi Gente, says the coalition's effort to increase Puerto Rican voting isn't about politicians, but it will increase the power of a community that for too long has been underserved. A recent report from the Hispanic Federation predicts that Puerto Ricans are on their way to surpassing Cubans and becoming the largest population group of Latinos in the state by 2020.

"It really doesn't have to do with this candidate or that candidate," she says. "This is about our voice and our power. If we don't use it now, then those very politicians will not make our issues their priority."