The prez seems to have hurt the feelings of the 'f*ck your feelings' crowd. 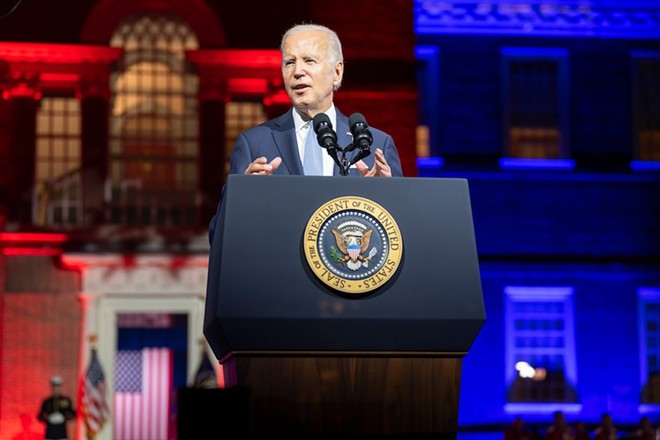 photo via White House Official Facebook page
It seems that President Biden's recent speech hurt the feelings of the "fuck your feelings" crowd.

Come, friends, and let us clutch our pearls together, for the president of the United States — in saying what needed saying years ago, in identifying the rot eroding our institutions, in echoing the increasingly dire warnings of democracy scholars about the illiberal, authoritarian movement that has consumed conservative politics — might have hurt the fuck-your-feelings crowd’s feelings.

The speech at Philadelphia's Independence Hall last week — billed as a major address on the “battle for the soul of the nation” — will likely be most remembered for its strangely ominous optics, like President Joe Biden’s comms team leaned in a little too hard to the Dark Brandon memes, placing red floodlights and a silhouetted Marine honor guard behind him. Or, as Tucker Carlson called it, a “blood-red Nazi background.”

But it shouldn’t be. It was by far the most important speech of Biden’s presidency, and one of the most important presidential speeches in a generation. It also marked a pronounced shift from the Biden who thought he could break the MAGA fever to one who, two years in, realized that the Republican Party he knew is a distant memory.

“I believe it’s my duty, my duty to level with you, to tell the truth no matter how difficult, no matter how painful,” Biden said.

“And here, in my view, is what is true: MAGA Republicans do not respect the Constitution. They do not believe in the rule of law. They do not recognize the will of the people. They refuse to accept the results of a free election, and they’re working right now as I speak, in state after state, to give power to decide elections in America to partisans and cronies, empowering election deniers to undermine democracy itself.”

Every word in that paragraph is accurate.

Same with this one: “They look at the mob that stormed the United States Capitol on Jan. 6, brutally attacking law enforcement, not as insurrectionists who placed a dagger at the throat of our democracy, but they look at them as patriots. And they see their MAGA failure to stop a peaceful transfer of power after the 2020 election as preparation for the 2022 and 2024 elections.”

Earlier that day, in fact, former President Donald Trump promised pardons for those who participated in the Capitol riot if he is re-elected.

No less predictable were the Beltway pundits, many of whom got their knickers twisted over the Marines in the background — like they forgot Trump’s military-as-props fetish or the time George W. Bush landed a plane on an aircraft carrier to celebrate a mission that was not accomplished.

The Washington Post’s editorial board cried over Biden’s supposed appeal to partisanship instead of patriotism. “You don’t persuade people by scolding or demeaning them, but that’s how the president’s speech landed for many conservatives of goodwill,” the edit board scolded.

The Post specifically objected to a line about “MAGA forces” taking the country “backwards to an America where there is no right to choose, no right to privacy, no right to contraception, no right to marry who you love” — all of which, of course, is happening.

But in the Post’s view, just because the far right wants to roll back a half-century of civil rights guarantees so that gerrymandered state legislatures can strip women of their autonomy, that doesn’t mean they’re against democracy.

Also, because editorial writers can’t help themselves, they chastised Biden for not calling out his own party for “its cynical effort to elevate some of the same ‘MAGA Republicans’ he now warns will destroy democracy if they prevail in the general election.”

I’ve previously addressed the Democrats’ short-sightedness in propping up Republicans they think will be easier to defeat. But let’s be real. In the pantheon of sins against democracy, it ranks pretty low. Both-sidesism is a hell of a drug.

And it’s not like Biden didn’t appeal to unity and common purpose. He just didn’t pretend that Trump’s loyalists would be part of it.

“For a long time, we’ve told ourselves that American democracy is guaranteed, but it’s not. We have to defend it, protect it, stand up for it, each and every one of us,” Biden said. “That’s why tonight, I’m asking our nation to come together, unite behind the single purpose of defending our democracy regardless of your ideology.

Biden — against his convivial instincts — decided to see American politics for what it is, not what he wants it to be. There is an extremist, authoritarian right — “semi-fascist” is an accurate descriptor, according to an expert on fascism — that is taking over the Republican Party. Its rise imperils the rule of law, basic civil liberties and democratic pluralism. We cannot act like it’s normal.

And sure, the semi-fascists will get angry. They’ll project. They’ll call Biden Hitler or say he’s as bad as Trump. A hit dog hollers.

But what the WaPo’s editorial board didn’t understand is that Biden’s speech wasn’t meant to persuade the MAGA crowd.

You’re not going to reform the MAGA movement. You have to crush it.