In Florida, the drive to push women back into forced births and LGBT folks back into the closet is just getting going 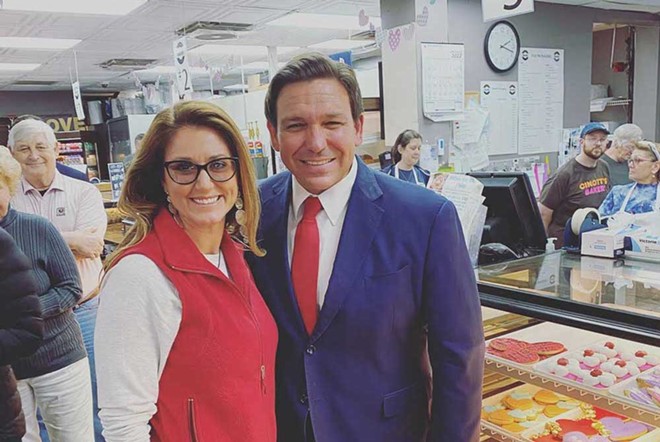 photo via Esther Byrd 4 Liberty/Facebook
Gov. Ron DeSantis with his newest appointee to the Florida board of education, Esther Byrd. She's pro-QAnon, Proud Boys and Jan. 6, and anti-anti-fascists

In Texas last week, a woman was arrested for murder and jailed on a $500,000 bond for taking medication to induce an abortion — something that is not a crime in Texas, although the state’s lawmakers have banned the sale or delivery of medications that terminate pregnancies.

In Oklahoma — where Texas women began obtaining abortions after Texas’ six-week ban kicked in — the legislature made providing an abortion a felony. If that proves a bridge too far for even this Supreme Court, Oklahoma will likely replicate Texas’ law, which allows vigilantes to sue anyone who helps a woman obtain an abortion after a fetal “heartbeat” is detected. So women will have to drive to Louisiana, Kansas or New Mexico, where clinics are already full and, at least in Louisiana and Kansas, it’s probably just a matter of time before Republican legislatures follow Texas’ lead.

And then there’s Alabama, which made it a felony for doctors to provide gender-affirming health care to people under 19. Gov. Kay Ivey, after giving the issue the rigorous scientific consideration it deserved, justified signing the legislation thusly: “If the Good Lord made you a boy, you are a boy, and if he made you a girl, you are a girl.”

Ivey signed a second law replicating Florida’s “Don’t Say Gay” legislation and banning trans kids from using school bathrooms that conform with their gender identities — reminiscent of the so-called “bathroom bill” that turned North Carolina into a national laughingstock in 2016. (We’ll come back to that.)

Speaking of Florida, Gov. Ron DeSantis’ newest appointee to the state’s board of education, Esther Byrd — a QAnon lunatic who has defended the Proud Boys and Jan. 6 rioters — publicly congratulated a “whistleblowing” parent who complained about a high-school teacher who wore a “Protect Trans Kids” T-shirt on Transgender Day of Visibility. Of course, DeSantis and his allies assured everyone that the state isn’t bullying LGBTQ kids but rather “protecting small children from the predations of adults,” so I suppose Byrd was simply pleased that the school district had strictly enforced its ban on T-shirt slogans.

Or maybe she, like DeSantis’ spokeswoman Christina Pushaw, believes the teacher is “probably a groomer.” (We’ll come back to that, too.)

DeSantis can claim that the law doesn’t attack LGBTQ kids because its language is imprecise. Take its most controversial provision: “Classroom instruction by school personnel or third parties on sexual orientation or gender identity may not occur in kindergarten through grade 3 or in a manner that is not age-appropriate or developmentally appropriate for students in accordance with state standards.”

The law enables parents to sue school districts if they’re offended by what their child has heard. In theory, it’s only supposed to prevent teachers from “encouraging” “inappropriate” conversations, but in practice, what counts as encouraging or inappropriate is anyone’s guess. A second-grade math problem that mentions a same-sex family? That qualifies as “instruction on sexual orientation,” according to a bill sponsor. But what about a first-grade teacher who answers a student’s question about why another child has two dads? A fifth-grade teacher who tells the class that she has a wife? A ninth-grade history class that discusses the Stonewall riot? An AP English teacher who assigns a book with a trans character?

Winning lawsuits isn’t the goal. Vague laws like this are difficult to enforce. But they still intimidate educators into avoiding “controversial” subjects. So Republicans kept the law vague enough for DeSantis to score points with his base while criticizing Democrats and “woke corporations” for “overreacting” to efforts to protect kids from predators.

Which brings us back to Pushaw, who tweeted: “If you’re against the Anti-Grooming bill, you are probably a groomer or at least you don’t denounce the grooming of 4-8 year old children.”

She “explained” her tweet to Florida Politics: “There is no reason for 3- to 8-year-olds to learn about sex in school, and anyone who wants to teach kids that young about sex — particularly over parental objections — is creating an environment where grooming can easily occur. … Pedophiles groom kids by talking to them about sex.”

Notice how Pushaw casually equates sexual orientation with “sex”: Queers = perverts = predators. And here I thought Anita Bryant had been pied into obscurity 40-odd years ago.

But everything old is new again. The attacks on women’s rights have simmered for decades, waiting for a Supreme Court willing to play along; once Roe falls, red states will trip over themselves competing to pass the most draconian legislation. Critical race theory is but another means of stoking white anxiety, like fears of school busing but with less grounding in reality. The current attack on LGBTQ “instruction” in schools is a natural follow-up to critical race theory: Invent a problem, then create a solution that targets a marginalized group.

Save Our Children. Anita Bryant would be proud.

The new trans-people-as-bogeymen strategy first surfaced in North Carolina in 2016, a year after the Supreme Court legalized same-sex marriage. The legislature overrode Charlotte’s anti-discrimination ordinance and forbade trans people from using public restrooms that didn’t conform to their gender identity, based on a myth that trans women are men who want to get pervy in ladies’ bathrooms.

Yet six years later, Alabama passed a similar law and it barely merited mention. And during Ketanji Brown Jackson’s confirmation hearing, Republicans made clear that they want the Supreme Court to revisit same-sex marriage. Hell, maybe interracial marriage, too.

Progress isn’t a straight line. Rights aren’t always permanent. Don’t get comfortable; they’re just getting started. This train is rolling, and no one knows where it will end up. Populists will always need another target.