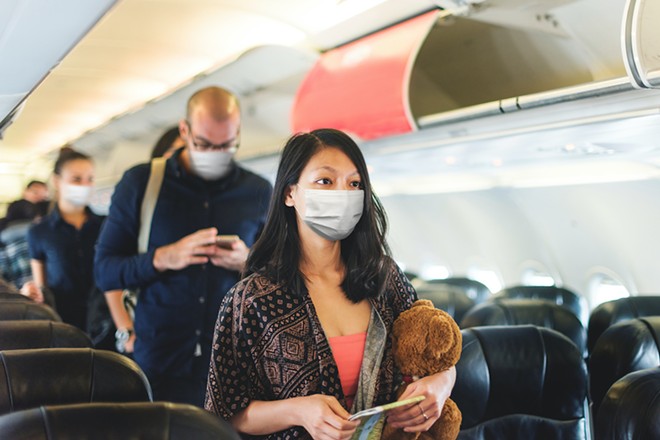 Nine months after a Florida federal judge blocked a requirement that airplane passengers and other travelers wear masks amid the COVID-19 pandemic, an appeals court next week will take up a Biden administration challenge to the ruling.

A panel of the 11th U.S. Circuit Court of Appeals will hold a hearing Jan. 17 in Miami, as U.S. Department of Justice attorneys argue that the Centers for Disease Control and Prevention had the authority to require people to wear masks on planes, trains and buses to try to prevent the spread of the virus.

Florida Attorney General Ashley Moody and other Republican politicians from across the country have backed arguments by the Health Freedom Defense Fund and individual plaintiffs, who contend that U.S. District Judge Kathryn Kimball Mizelle correctly halted the mask mandate in April.

“The mask order does nothing to identify who has COVID as a step toward isolating and treating them,” the plaintiffs’ attorneys wrote in an August brief at the appeals court. “It is instead an entirely generic measure that, if allowed to stand, could become an enduring feature of domestic and international travel — and perhaps other commercial activities — by U.S. residents.”

But Justice Department attorneys argued in the appeal that the mask order “falls easily” within the CDC’s legal authority, which includes taking steps to prevent the interstate spread of diseases and approving sanitation measures.

With many travelers long ago shedding masks, it is unclear what would happen if the appeals court overturns Mizelle’s ruling. But mask requirements have been one of the most controversial issues of the pandemic, and numerous groups — ranging from doctors and airline workers to disabled passengers and members of Congress — have filed friend-of-the-court briefs in the appeal.

Mizelle, who is based in Tampa and was appointed to the federal bench by former President Donald Trump, ruled that the mask requirement exceeded the CDC’s authority under a law known as the Public Health Services Act and refuted that the requirement was a legal sanitation measure.

“The government interprets ‘sanitation’ and ‘other measures’ to include traditional techniques that impede the spread of disease,” Mizelle wrote. “One definition it relies upon is even broader, defining ‘sanitation’ as the ‘applying of measures for preserving and promoting public health.’ If Congress intended this definition, the power bestowed upon the CDC would be breathtaking. And it certainly would not be limited to modest measures of ‘sanitation’ like masks.”

Mizelle also ruled that the CDC violated the federal Administrative Procedure Act, in part because it did not give the public proper time to review and comment on the mask rule before it was put in place. Also, she wrote that the requirement was “arbitrary and capricious” because the CDC didn’t adequately explain its reasoning.

In a separate case, Orlando-based U.S. District Judge Paul Byron later backed the CDC’s mask order. That case has been put on hold pending a ruling by the Atlanta-based appeals court in the challenge to Mizelle’s decision.

Moody’s office in August took the lead in a brief filed by officials from 23 states who oppose the mask requirement. The states also have received approval to take part in next week’s arguments.

In the August brief, the states made a series of arguments, including disputing the CDC’s contentions about authority to impose sanitary measures.

“In context, ‘sanitation’ authorizes CDC to demand cleaning, but it does not authorize CDC to require any action that may result in cleanliness, much less on a nationwide basis,” lawyers in Moody’s office wrote. “A mask does not clean anything. Rather, it traps respiratory droplets in place, without regard to whether infection is present.”

But in the May brief, Justice Department attorneys wrote that a mask is a “conventional sanitation measure.” They also disputed Mizelle’s conclusion that the order was arbitrary and capricious.

“(The) CDC order explained that social distancing is difficult if not impossible in crowded settings such as airplanes, buses, and transportation hubs; that the virus that causes COVID-19 can be spread by people who are asymptomatic; and that mask wearing is a simple, effective strategy that is less disruptive to domestic travel than testing or separating passengers,” the Justice Department brief said.