Cresco’s Live Resin is a marked upgrade over earlier BHO extracts, with flavor and effects comparable to good old-fashioned flower

A little dab'll do ya 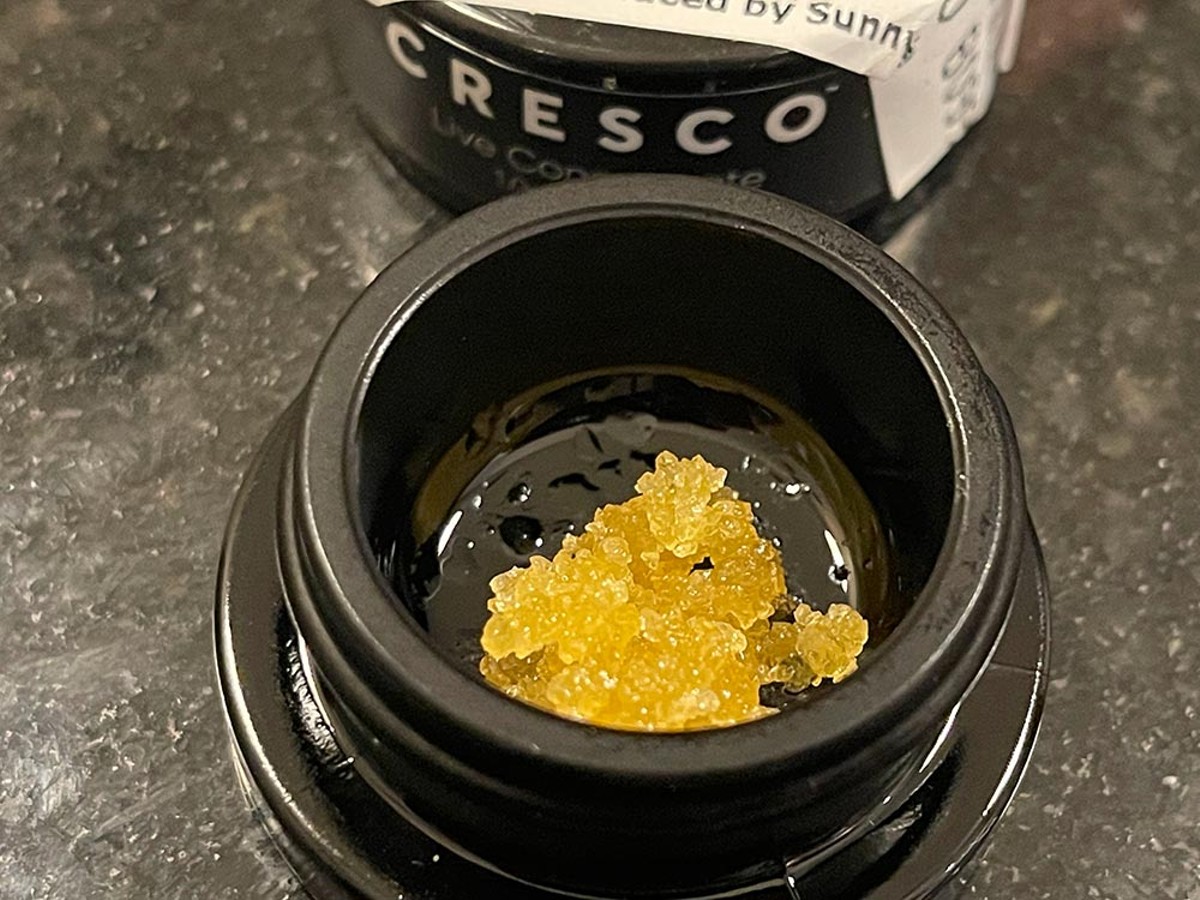 This week, we take a turn away from theater and theme parks to concentrate on my third-favorite T — THC — as Live Active Cultures takes a look at Live Resin, a medical marijuana product that's recently added yet another new acronym to my vocabulary: BHO. If you read last July's "Oil Day" installment of this column, you already know that I've been dipping my toe into the waters of cannabis extracts like distillates and dab tabs. Now, thanks to an invite from Cresco Labs' Sunnyside dispensary in Fern Park, my dabbling with dabs has led me into the flavorful world of butane hash oil.

My exploration of the world beyond ethanol and CO2-based extractions actually began back in August with, of all things, an Eventbrite alert. The Trulieve store near the Mall at Millenia was offering a free "Elevate Your Knowledge" seminar, and a few nights later I found myself sitting through a class-cum-sales pitch with a half-dozen fellow MMJ patients, learning about the vast array of concentrate options available at Florida's largest dispensary chain. The good news for the dab-curious (like myself) who are intimidated by the cost and complexity of traditional propane-driven dab rigs: Extracts can be consumed with a variety of electronic devices, starting with nearly disposable pens for around $25 and going up to digitally controlled tabletop contraptions costing several hundred dollars.

I went home that night with my first dedicated concentrates vaporizer — an iridescent rainbow Puffco Plus Pen for under $100 — and a discounted gram of Mandarin Orange TruCRMBL, which has the consistency of broken chalk. A rice grain-sized crumb in the Puffco (scooped using the mouthpiece's convenient built-in dab tool) quickly produced pleasant mental effects and a mild citrus flavor. But after extensive testing (cough, cough) I decided that despite being branded as "full spectrum," Trulieve's ethanol-extracted oil with reintroduced terpenes simply didn't deliver the authentic flower flavor and full-body impact I prefer. I actually ended up using most of the crumble as a kief-style topper on bowls of old-fashioned flower, which remains my preferred medication method.

Enter Sunnyside, which was known as One Plant when I first interviewed its former CEO, Brady Cobb, in 2011. Back then, Cobb's company was focused on producing high-quality "live rosin" using a solvent-free process involving only fresh-frozen marijuana, ice water and pressure. I still consider One Plant Live Rosin vape cartridges (which Sunnyside continues to sell) to be the best available in the Orlando area, delivering both the taste and the entourage effects of the original herb. However, live rosin is expensive, costing more than double what competitors charge for their inferior (but still effective) extracts.

When we last spoke in late August about his new venture, Green Sentry, Cobb remained relatively uninterested in hydrocarbon extraction methods using butane, which were finally greenlighted by state regulators in 2021 after initially being excluded from the program. On the other hand, his previous outfit's new owners are going all-in on butane hash oil (aka the BHO that wasn't president) and its derivatives, in the form of Cresco's new line of Live Resin (with an E) concentrates and Liquid Live Resin vape carts. Full disclosure: The following products were provided at a discount for review purposes.

I'll admit that I've been apprehensive about trying butane-based products, since I'd prefer not to be inhaling something made with the fluid used to fill Zippo lighters. Fortunately, while improper extraction methods were a hazard to producers and consumers alike during prohibition, this brave new world of legal BHO means I can download a Certificate of Analysis from an accreditation laboratory testifying that the trace amounts of toxins remaining in the concentrates are well below the threshold that the FDA says is likely to harm me.

With that comforting assurance, I broke into my first gram of Cresco's Live Resin, which is available in several different textures, including peanut butter-like Budder and syrupy Sauce. For ease of handling, I selected Sugar, which looks like the organic raw honey you'd find at a fancy farmers market. It needs to be kept cool to maintain its consistency, and cleaning remnants of the crystalline goo from my Puffco's chamber was challenging. But after my first mouthful of vapor from a pea-sized glob of Dirty Lemons, I knew from the earthy flavor and head-to-toe effects that Cresco's Live Resin represented a marked upgrade over my earlier extract experiences.

If you want the intense taste and impact of Live Resin in a less messy form-factor, the Cresco Liquid Live Resin vape cartridges I also sampled rivaled — and perhaps even exceeded — One Plant's Live Rosin in tasting like the plant it was pulled from, while costing $10 less per half-gram cart. The Guava Pie in particular has sweet, fruity notes under the grass and gas, without any of the candy-like aftertaste you get from botanical terpenes. And even though the THC percentage on the label may only read in the 60s or 70s (versus 80 percent or more for some distillates) you'll be getting additional health benefits from the minor cannabinoids that go along for the Live Resin ride. Just do yourself a favor and pick up a quality vaporizer battery with precise voltage control down to 2.4V, which will deliver more flavor at lower temperatures while also making your cart last longer. And whether you're trying BHO for the first time as a liquid or solid, be sure to start slow, because "a little dab will do you."