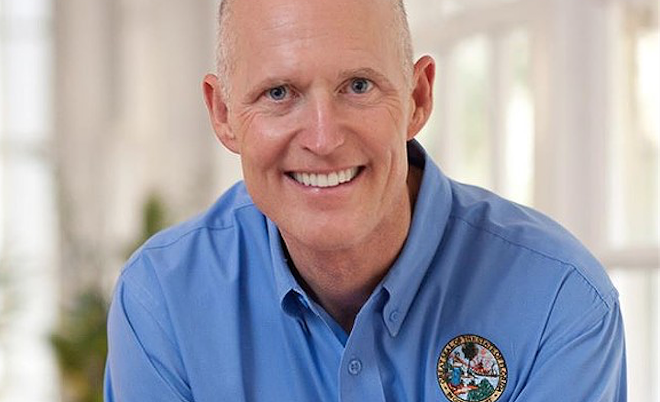 Photo via Rick Scott/Facebook
This afternoon, Florida Gov. Rick Scott called for the resignation of  FBI Director Christopher Wray after the agency said it failed to investigate a tip on the Parkland high school shooter.

And while the FBI should probably shoulder some blame for not acting on that tip, Gov. Scott should probably not say shit about mass shootings, especially when you consider that on his watch the state of Florida is now home to two of the ten most deadly mass shootings in modern U.S. history.

In the past seven years under his reign as governor of Florida, Scott has actually loosened commonsense regulations on gun laws, and has done absolutely nothing to curb gun violence, except for, of course, offer his "thoughts and prayers."

To illustrate this point, here's a handy list of Scott's efforts to do as little as possible about gun violence, and reading it consecutively is sobering.

2011: Rick Scott signed a controversial “docs versus glocks” bills, which punished doctors who asked patients about gun ownership. Pediatricians feared the safety repercussions of the legislation.

2011: Rick Scott said he would sign a guns-on-campus bill if it reached his desk despite the fears of many about the dangers of the mixture of guns and alcohol on campuses.

2012: A Federal judge barred enforcement of the docs v. glocks law, saying it was based on anecdotal information and unfounded conjecture.

2012: Rick Scott cut the cost of a concealed weapons permit.

2013: Rick Scott said he would not be proposing any changes to state gun laws during the year, despite the Sandy Hook massacre just weeks earlier.

2013: Rick Scott opposed universal background checks for gun purchases: “It’s always easy to say do something when no one understands what it is.”

2014: Rick Scott signed House Bill 89, which intended to allow people to use threatened force, such as a warning shot, as part of the stand your ground defense.

2015: Rick Scott signed Senate Bill 290, which allowed Floridians to carry a concealed weapon for 48 hours during a mandatory evacuation without a license.

2016: Rick Scott cut the cost of a concealed weapons permit — for a second time in his Administration.

2016: Rick Scott refused to talk about gun measures in the aftermath of the Pulse shooting: "There will be plenty of time to deal with how our society comes together.”

2016: Rick Scott refused to talk about gun measures in the aftermath of the Fort Meyers club shooting: “The Second Amendment Has Never Shot Anybody"

2017: Miami Judge ruled that the new changes to the Stand Your Ground Law were unconstitutional.

2017: Rick Scott refused to talk about gun measures in the aftermath of the Fort Lauderdale Airport shooting: “It’s not a time to be political" [Transcript – Rick Scott Press Conference, 1/6/17]

2017: Rick Scott cut the cost of a concealed weapons permit — for a third time in his Administration.