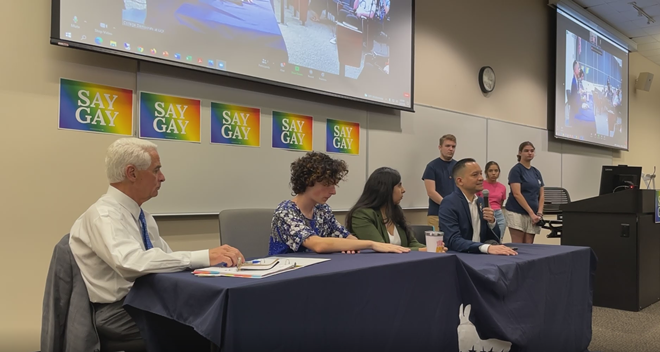 "Say Gay Panel and Speak Out" Facebook livestream
State Rep. Carlos Guillermo Smith (far right at table) speaks against the "Don't Say Gay" bill along with other representatives, LGBTQ+ activists and students at a panel discussion on Wednesday.

Crist was joined at the "Say Gay" panel discussion by Orlando-area  State Reps. Anna Eskamani and Rep. Carlos Guillermo Smith, LQBTQ+ activists and UCF students to speak out against the bill after it passed the Florida Legislature earlier this month.

The "Don't Say Gay" bill would prohibit classroom discussions of sexual orientation or gender identity from kindergarten through third grade. The bill passed the state Senate on March 8 and is headed to Gov. Ron DeSantis' desk.

“‘Don’t Say Gay’ is a heinous piece of legislation that silences teachers in their own classrooms and takes away the safe spaces of millions of LGBTQ students who may have no where else to turn,” Crist said.

The bill would also allow parents to take action against schools that violate the law.

Smith, the state's first LGBTQ Latino senator and Central Florida outreach coordinator for Equality Florida, said that he was in disbelief that in modern times, homophobia and transphobia are such regular adversaries.

LGBTQ activist Jim Obergefell, lead plaintiff in the Supreme Court case that allowed same-sex marriage, was also in attendance and said that the bill is hateful and harmful.
He said that making a hostile environment for teachers, staff and students is the last thing lawmakers should do.

“As lawmakers we should be fighting to protect people,” Obergefell said. “We don’t do that by making it illegal to acknowledge that queer people exist.”