Ed Sanders, founder of the Fugs, led an exorcism of the White House ... and it may have worked 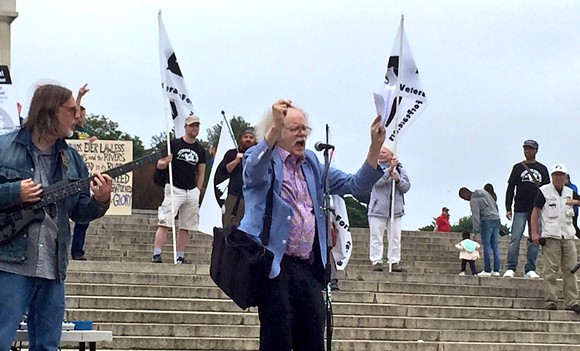 Standing on the steps of the Lincoln Memorial, poet and provocateur Ed Sanders shouts, “Out demons, out!,” his arms raised in clenched fists above his head, a computer bag hanging from the shoulder of his powder-blue sports coat. With a wild halo of white hair exploding from his balding pate, small glasses perched upon his crinkled button nose and a drooping mustache, Sanders looks like a wild elder statesmen, the Benjamin Franklin of an alternate United States.

Fifty years ago, in 1967, Sanders appeared on the cover of Life magazine, which proclaimed “the worldwide underground of the arts creates The Other Culture.” The “other culture” was not yet dubbed the “counterculture,” but whatever it was called, Sanders was at the center of it – especially in New York, where he founded the band The Fugs and started the famous Peace Eye Bookstore, and Fuck You/A Magazine of the Arts. He was an instrumental member of Youth International Party, or Yippies, which combined political activism and countercultural expression.

As the Vietnam War escalated, Sanders and his band The Fugs performed an exorcism of the Pentagon later the same year.

Fifty years later, as we are faced with an urgent need to reinvent the underground, Sanders and the current lineup of The Fugs – newbies who didn’t start playing with him until the 1980s – are performing an “Exorcism of the White House” at the Lincoln Memorial.

“In the name of Rosa Parks, Lilith, Mary, Aphrodite, Hera, Rose Pesotta …/ We call upon the malevolent spirits in the White House/ To be banished and exorcised! Out, demons, out!!!” Sanders chants over the drone and the pounding rhythm rising up from his bandmates as his white hair bobs in the porta-potty wind.

“People were always saying, ‘Why don’t The Fugs do something about Trump?” he says after the performance, still standing on the steps of Lincoln Memorial. “We decided to exorcise the White House, because it’s not so much Trump as these real creepy people he’s put into power. So in the exorcism I list all the secretaries and the people he’s put in power.”

The song, he says, premiered earlier this year at Cooper Union in New York, where Sanders stood behind the same lectern that Abraham Lincoln used to deliver his “House Divided” speech in 1860.

This seems like a perfectly Sandersian moment, where time loops in on itself. Here he is reprising a 50-year-old idea in a new context while hearkening back to what was our nation’s moment of greatest division.

And it fits him, because he is as much a connecter, scholar and archivist as he is a poet.

I ask him what he would tell a young person now trying to make some kind of life counter to our corporate culture.

“Always spend time every day, set aside time to study, to read books and read articles and always take a lot of notes and create files, create alphabetical files on subjects you’re interested in, but also chronological files,” he says. “And to dare to try to make yourself part of the history of the place you’re living in.”

I am stunned by the power of that last sentence. But he isn’t done. “And start figuring out what other people are doing. And then, if you’re young, to do what Allen Ginsberg said – ‘I saw the best minds of my generation’ – and that is to link up with the very best minds in all the subjects you’re interested in. Poetry, music, engineering, rocket science, find the best minds,” he says. “Hang out.” 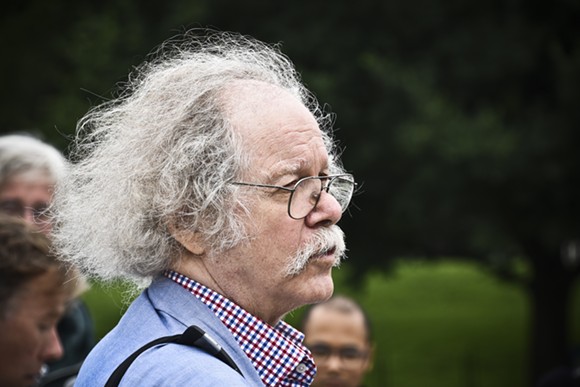 Since Sanders was the face of the ’60s counterculture, I ask what he makes of the claim by members of the alt-right, like Infowars’ Paul Joseph Watson, that they are the new counterculture.

“I don’t know what to say to them,” he says. “I don’t read them. I live in the woods. I heat with wood. I don’t have anything to do with those people. It’s a free world and the internet is one of the new conflict grounds and so …” He trails off for a moment, looking down toward the reflecting pool.

“They’re like a cult,” he says finally. “A cult ultimately has to deal with dentistry, children, passing on books and heritage and poetry and culture. So whatever setup passes on a decent, humane, sharing semi-socialist or socialist agenda is the one that will triumph, and everything else is in the service of the war machine.”

He has found some bit of inspiration in online activism and the nurturing of semi-social or socialist ideas, but he acknowledges “it’s really a terrible situation.”

“I don’t have a lot of hope,” he says. “It’s like when they grow a sugar maple stand in New England. You plant the sugar maple tree not for your own children but your grandchildren. So the seeds of peace are like sugar maples, we’re planting them for long after we’re gone.”

The performance of the exorcism is quite powerful, but it is also a throwback, a reprise. And the recording, which lacks the spookiness of the live performance, is kind of bad and not likely to speak to the kids coming up now who feel a need to express their disgust with the world they grew up in. I notice there aren’t many young people at the performance, and I wonder who will create our new cultural forms. Even Antifa, among the most politically radical factions on the left, seems culturally retro, mimicking the political punk of the ’80s.

As I watch Ed Sanders walk away, I stand here, almost gagging as the wind blows the porta-john stench my way, and I don’t even consider the possibility that the spell may have worked.

But later the same night when I am about to go to bed, Trump tweets, “Despite the constant negative press covfefe.” Maybe it worked after all and the demon Covfefe was exorcised, I think.

Press Secretary Sean Spicer seems to prove me right the following day when he tells reporters he thinks “the president and a small group of people knew exactly what he meant.”

Note: I’ll periodically revisit the idea of reinventing the underground, so send examples of new countercultural expression in your city to [email protected]