Let's get right to the point: Like the city in Florida from which it hails — Miami — Bacon Bitch is all style and no substance. The new UCF-area breakfast spot distracts from its lackluster food with profanity, booming music, low-quality alcohol and skimpily clad servers in booty shorts and sports bras.

You'll love it, if you're the type who claims you read Playboy for the journalism or go to Hooters for the wings. Otherwise, take a pass.

The restaurant itself is an aesthetic, a rehabbed former Applebees now starkly tiled with white subway and black trim. Other than the overplayed custom neon green signs and faux foliage — obvi for the Insta — only mirrors adorn the walls, presumably for patrons to check their hair and makeup before and after eating. 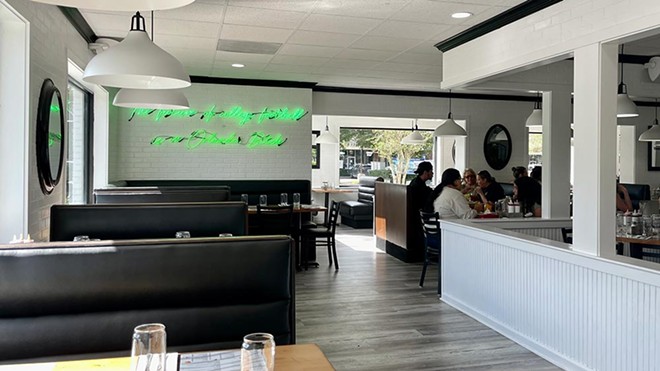 We dined on a Thursday morning, and Cardi B, Fergie and Nicki Minaj blasted at ear-piercing decibels on the speaker directly over our table. At least, we thought it was loud until the birthday shots came out for a table nearby and the Bacon Bitches all lined up and danced out to Trey Songz' "Say Aah," serenading the birthday girl and treating her to some twerks.

We started with a creamy and refreshing iced cafe con leche ($5), which was probably the best item we sampled on our visit — Miami does get Cuban coffee right, at least. We also tried the Hustle ($13), a frozen tequila and mango daiquiri, which lacked any depth of flavor other than alcohol and sugar.

We ordered the Curvy Bitch ($18), an open-faced croissant with premade avocado spread, a fried egg, smoked salmon and obviously jarred hollandaise, flanked by undressed (maybe part of the "naked" joke?) arugula. The flavors were fine, but could be easily replicated at home with Publix groceries. It didn't seem like any actual cooking, other than egg frying, was happening in the kitchen, which explained how the food comes out so quickly. 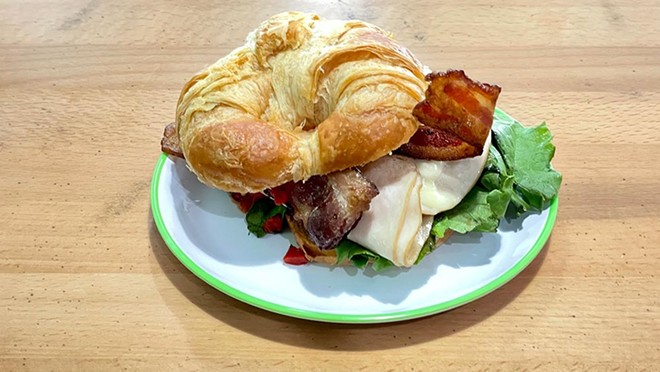 We also tried the OG Bitch sandwich, a Costco croissant which inexplicably featured two different egg preparations — fried and scrambled — two slices of very crispy bacon and a cheddar-cheese-filled hash brown patty in a rectangular shape impossible to achieve without large-scale commercial food manufacturing, for a ridiculous $15. On the side, we tried the French Bitch ($8), a griddled Costco croissant with a smear of Nutella and dusting of powdered sugar, and the Crispy Bitch ($5), more of those cheddar-stuffed hash browns. Both were nothing special, but the crispy edges and stringy cheese pull when biting into the hash brown was worth a half-hearted "oooh."

I had hoped that the branded squeeze bottles labeled "Sticky Bitch," "Spicy Bitch" and "Ketchup Bitch" contained some house-made sauces, but a taste of each revealed more of the same: pretty packaging covering a banal trio of maple syrup, Tabasco and ketchup. 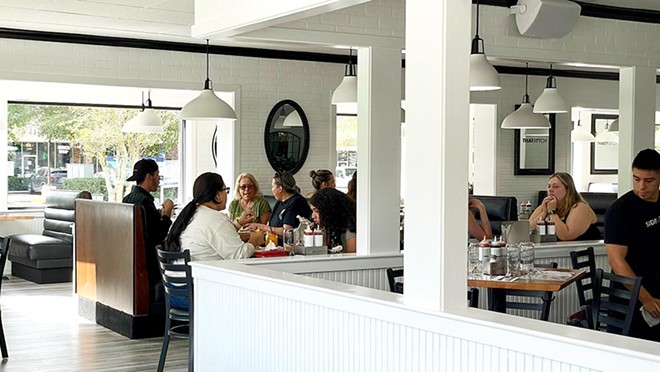 Service was attentive and friendly, though every time our server came by the table, we were addressed as "bitches" — appropriate, as our table was all female-identifying, i.e. "how's your food, bitches?" and "can I get you anything else, bitches?" Once was enough for a giggle. The rest of the commentary elicited near-constant eyerolls.

I'd hoped our experience dining at Bacon Bitch would be more badass bitch than just bad, but unfortunately it leaned to the latter. You'll have a better meal at First Watch across the street (for half the price), won't be reminded what a bitch you are multiple times during breakfast, and you won't have to listen to Trey Songz, so it's a win-win-win to pass on a visit to Bacon Bitch.