Photo by Brian Carlson
A local group of (mostly) millennial movers and shakers is shifting the scene. Instead of the so-called “social network,” that digital world we all half-live in, they’re creating gatherings ripe with opportunity for making real-life, lasting, meaningful connections between people with shared interests. And they’re accomplishing this using a concept that’s been around for more than a decade. They’re organizing meet-ups.

By definition, a meet-up is an arranged, informal encounter between two or more people. Meetup.com, which calls itself “the world’s largest network of local interest groups,” defines a meet-up as “neighbors getting together to learn something, do something or share something.”

The website that took off as a political organizing tool for Howard Dean’s presidential campaign is based on the simple observation that the Internet could be used to make it easier for people to connect “IRL” in their communities. Until recently meet-ups remained somewhat underground, like Prohibition-era speakeasies, even though there are thousands of meet-ups in Orlando listed on the site. A select few are creating unique and unusual experiences that are some of the hottest events in town. From bike tours to geek gatherings, pop-up discos to entrepreneurial enclaves, dinner parties to TED Talk-style lectures, there are hip happenings for you and people just like you to find your place, passion and purpose.

TALK WITH YOUR MOUTH FULL

Catering to foodie folk, the Dinner Party Project is an invitation-only meet-up that brings eight strangers together for a casual yet traditional multi-course dinner catered by a local chef. In a salon-like atmosphere, hostess Dana Marie Roquemore leads intimate conversations between people from different circles – chosen at random from an online lottery – in order to create new connections.

Having hosted more than 60 dinners in the past 10 months, she says she is giving strangers an opportunity to share their stories. She accomplishes this by keeping the party large enough to keep the conversation going, but small enough for everyone to have a chance to speak.

"It's a social adventure outside of normal everyday interactions, playing on random connections," she says. "Friendships have blossomed through this experience. Others have gotten job offers from the people they met."

But where do people go when their whole life is their work? Orlando Tech Association's meet-up, that's where.

Now held monthly in Church Street Exchange's flexible co-working space Canvs, the Orlando Tech Meetup began in 2011 at the Rusty Spoon with 10 owners of tech startups looking for an outlet to demo their products and get real-world feedback. Since then, it has continued to grow, becoming the largest tech startup and meet-up group in the Southeast.

"We're the only event that attracts everyone from the tech community," says Orrett Davis, executive director of Orlando Tech Association. "More than just the people on the technology side, we get creatives, designers, business professionals and investors. It's the full spectrum of the industry."

This is accomplished by keeping the atmosphere light and fun – suits and ties are not acceptable. The entrepreneurs who pitch at the meet-ups are at a stage where their products are ready to be unveiled: "Attendees are able to feel, play with, touch and react to each."

So far 150 companies have demoed their products, raising between $60-$70 million in total investor funding. In fact, during Orlando's Tech Week in April, this was one of 50 technology meet-ups invited to the White House to discuss how the government can better tap into technology.

"We are on our way to becoming the city's first 'digital main street' with the goal of helping local businesses get off the ground and enterprise corporations source new talent and innovation," Davis says.

According to Phil Santos, the local DJ performing under the name VSN QST (pronounced Vision Quest), there are three ingredients necessary to form lasting relationships. "Shared interests, shared experiences and repeated, unplanned interactions are all necessary in order for a real friendship to last," he says. As founder of the community-driven dance party Body//Talk, he's on a mission to foster friendships based on radical self-expression, cultural identity and a shared love for local music.

Hailing from Brazil, where he says spontaneous dancing, socializing and drinking is interwoven into the fabric of everyday life, Santos started the meet-up as an outlet to perform his music. "I was trying to re-create the feeling of a house party in a nontraditional venue." 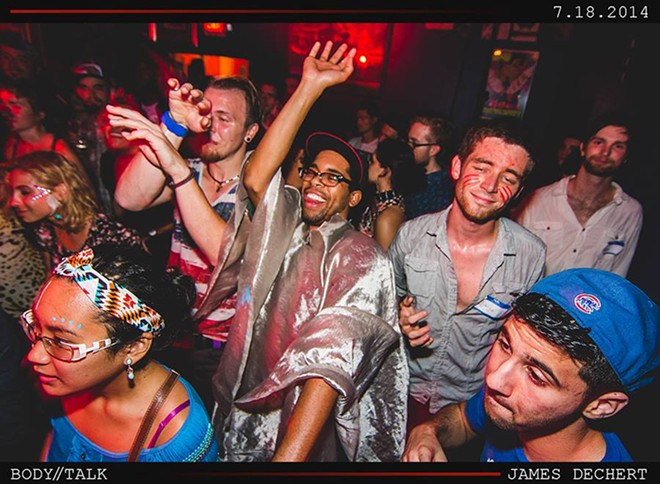 What began in the Space (a now-defunct DIY venue, see page 33) in June 2013 before moving to the Milk District now happens on the second Saturday of every month and is guided by Santos' formula for creating a "highly connective environment."

"We use our space to bring people close together. We have separate stations for talking and social interaction as well as multiple activities at each event."

Body//Talk includes dancing, live performances, body painting and prompts that foster social interaction. "The key is to have multiple ways for people to connect and be heard," he says. "We want to create a transformational experience. We want the world to hear our collective roar."

Meet-ups are also serving as a conduit to social action. The Hive, founded in 2013 by local social entrepreneurs Chris Castro and Clayton Ferrara, is a community think tank and an organizing platform for climate activists to address global environmental challenges. Described as a "speakeasy for innovation," the Hive meets in East End Market on the first Wednesday of every month.

"We wanted to create a model for incubating environmental solutions by crowdsourcing ideas from within the community," Castro says.

Each iteration features guest presentations by civic and community leaders on topics such as energy, water, food, waste and ecology. Meetings are concluded with group brainstorm sessions during which attendees draft and propose ideas that address a global issue on a local level. The local organic farming project Fleet Farming is just one example of dozens of sustainability programs to come out of these sessions.

What began as an offshoot from a project to help the University of Central Florida meet its climate action goals is now a global movement with chapters meeting up as far away as Hawaii and Uganda. Castro says what makes his meet-up so successful is that he focuses on participant interaction and engagement above all else.

"The people who attend the Hive are all interested in helping to solve environmental problems in their community and beyond," he says. "They want to be involved and to make a difference. The Hive is all about the cross-pollination of ideas."

Some people are simply interested in experiencing Orlando's great cultural assets in a new way, just as entrepreneur and activist Sarah Peerani was when she moved back to the city. Wanting to share her passion for bikes and public transportation with friends, she decided to organize a group of people together for a pub crawl by way of SunRail, the new commuter train. Thus, Orlando Conductor Crawl was born.

"It's hard to try new things when you're not part of a group," she says. "I want to give people something to be part of." 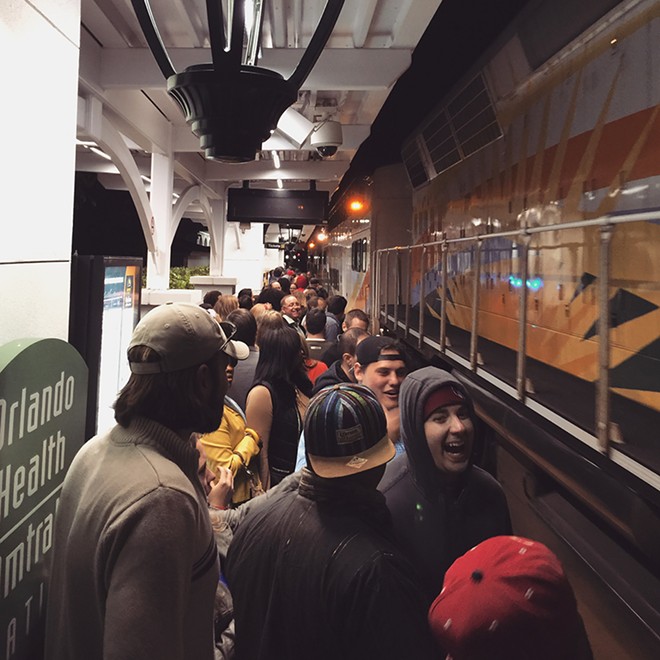 She did the same thing with the Orlando bike share program, Juice Bicycles, to create Orlando Bike Tours. She leads friends and strangers to her favorite haunts or to new places she's always wanted to try. Previous tour itineraries include some of the area's best coffee shops, tapas restaurants and burger joints.

"People in Orlando are especially hungry for experiences that are real, homegrown and local, unlike the corporate entertainment of theme parks and chain restaurants," says Eddie Selover, organizer and host of the Orlando chapter of the thought- provoking event PechaKucha Night. "PechaKucha Night resonates so deeply because people are increasingly longing to have positive interactions with each other in person, and especially to hear other people's stories."

He says PechaKucha doesn't fit the traditional meet-up mold. For those who aren't in the know, PechaKucha is an entertainment event featuring simple presentations consisting of 20 images with 20 seconds per image. First held in Tokyo in February 2003, the event draws its name from the Japanese term for "chitchat." While a traditional meet-up is based on people who have a single interest wanting to get together, PechaKucha Night makes a deliberate attempt to gather presentations on very diverse topics. 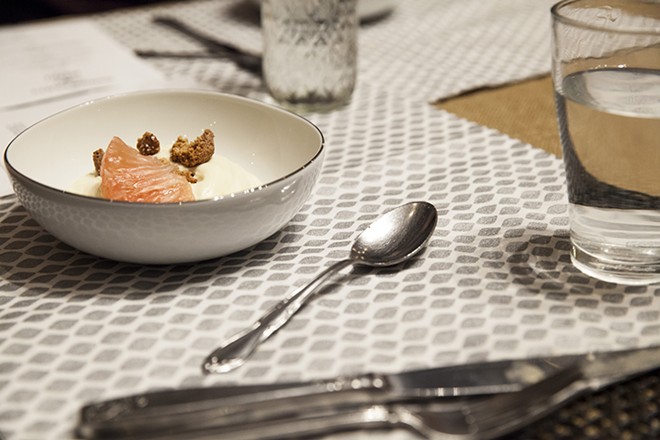 "The audience cuts across gender and demographics," he says. "If they have anything in common, it's that they're smart and curious, and they're looking to connect. Big minds, big hearts. That's what we get every time."

Big minds and hearts also frequent a series called Nerd Nite. Headquartered in A Comic Shop's watering hole, the Geek Easy, Nerd Nite is described as a place for thinking and drinking. Recurring monthly on second Thursdays, the meet-up seeks to create a relaxed atmosphere where anyone who is overtly passionate about something can congregate to share and learn. One of 98 around the globe, Orlando's first Nerd Nite chapter was kicked off on Pi Day, March 14 (3.14) of 2013. Since then, 28 consecutive Nerd Nites have fostered lively debates, featured dozens of guest presenters and possibly been responsible for many new romantic relationships.

"You're free to get as awkward as you want," said leader of the proceedings Ricardo Williams – a self-described movie, comic and Bruce Springsteen nerd – before kicking off a monthly round of Nerdy Speed Dating, a casual, no-nametag offshoot of Nerd Nite that takes place every third Saturday. "This is a safe space to appreciate everyone for who they are."

His mission is to foster authentic connections by giving people something to talk about based on the theme and presentations. "When you have a topic, you can start a conversation," he says. "That can lead to an authentic relationship."

Attendees like Andrew Walton understand the value of the environment. "I travel for work, so it's hard for me to maintain a network of friends in Orlando. As an engineer, I'm much better at thermodynamics than social dynamics." He says he attends meet-ups like Nerd Nite because it allows him to still be social even when out by himself. "I've always been a little shy, but here I feel comfortable meeting people and having a good time."