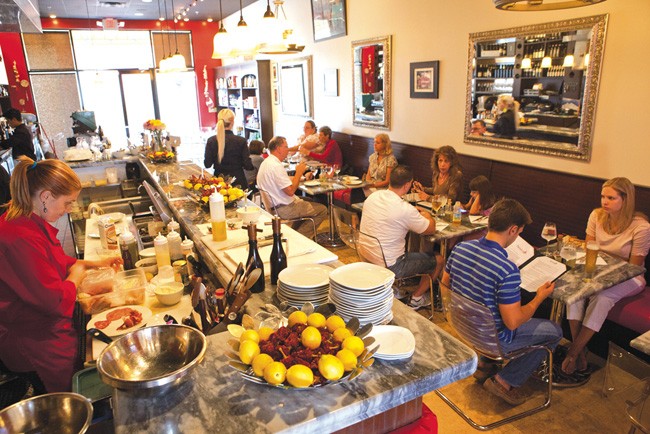 Anyone who's been to Italy can attest to how a holiday (Roman or otherwise) can influence one's sartorial habits; even more, a tour of the boot will almost certainly alter and refine one's gastronomic proclivities. There is a price to pay, however: With such culinary discernment comes an inevitable period of post-vacation withdrawal, and symptoms can be extreme – expectorating drip coffee at office meetings; demanding cornetti be served at Nature's Table; thumbing a nose at olive oil that doesn't sit in a dark-tinted bottle; and openly questioning the sanity of anyone extolling the virtues of frozen yogurt are but a few of the known manifestations. After two trips to Italy in the past six months, I still replay the memories of the meals I enjoyed there, then lament the fact that replicating those repasts here in Orlando is a next-to-impossible task. That is, I did, until I walked into Peperoncino.

In the narrow space, I beheld stainless steel tables placed so close together they seemed communal; shelves stocked with pastas, oils, even chestnut honey; built-ins lined with a healthy selection of Italian wine; and flatscreens set to RAI Television. An open kitchen and mirrored walls allow all patrons a view of owner-chef Barbara Alfano and sous chef Urllich Grude plying their craft within these humble confines. A daily changing bill of fare (check their Facebook page) highlights dishes that are at once rustic and contemporary, but most, if not all, will surely be laced with Alfano's Calabrian red-hots – the peperoncini for which her restaurant is named.

Floating in the bowl of rosemary-perfumed chickpea and potato soup ($8), the red peppers resembled curls of sun-dried tomato at first, but the unmistakable bite coupled with the punch of roasted garlic gave this zuppe a feel-good zip. Even fritters of imported, honey-drizzled pecorino Romano ($9) came flecked with the dried pepper. From the selections of primi, we dialed into the farfalle al telefono ($14), so named for the spiraling telephone-cord shape mozzarella takes when melted. The simplicity and flawless rationing of tomato, cheese, basil and olive oil had us reminiscing about the sincere and uncomplicated pasta preparations of our recent Italian sojourn. While baking branzino in parchment paper ($39) may seem like a complicated method of preparation, the resulting flavors of the fish were sublimely unadulterated, even when served in the light cherry-tomato-and-olive-oil broth known as “acqua pazza,” or “crazy water.” Local they're not, but desserts like limoncello mascarpone ($10) and Black Forest cake ($10) are so good they're sure to erase any carbon-footprint-related guilt.

Peperoncino fills up nightly with a predominantly older and moneyed crowd of Dr. Phillipsians, and Alfano's clear, brilliant flavors proffer enough new ideas to give the Old World-inspired menu a refreshing breath of life. The room is well-handled by four servers, but getting a post-meal espresso or macchiato can take a long time. On my last visit, the Rancilio espresso machine malfunctioned and, in looking for an explanation, our server had no words.

No matter – as always, our meal was, in a word, perfetto.