The Giver is faithful to the text, but flawed in many ways 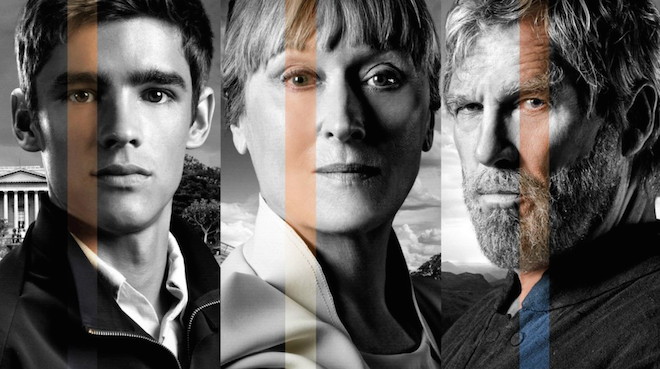 Since its publication in 1993, Lois Lowry's cherished YA novel The Giver has been a dream project of Jeff Bridges. He originally intended to direct the film adaptation with his father Lloyd Bridges in the titular role. Two decades and countless "required reading" lists later, he takes on the role himself as the adaptation has finally made it to the big screen in a movie faithful to the text, but flawed in many ways.

Although The Giver offers up a loyal adaptation, it does so at a relentless pace – the book’s 180 or so pages condensed to 90 minutes. The film feels even shorter than that. Due to this action-film momentum, much of the book's central themes of humanity and love conquering all are entirely lost. Traces of the sentiment are there but they're left in the dust in favor of heavy-handed conflict and moments so overwhelmingly sentimental they teeter on the verge of comedic.

The boy tasked with undoing the dystopian utopia is Jonas, played by doe-eyed Aussie actor Brenton Thwaites, who's destined for Teen Choice Awards greatness. Jonas gets along just fine in his colorless, emotionless world. In this future society, sameness is enforced for the greater good. Societal rules are strictly enforced (these include no touching in public and using "precise" language that excludes the word "love") and anyone who breaks them is in danger of being dispatched to the inauspiciously named "elsewhere."

Jonas is an upstanding young man with a nice family and a tight group of friends. Despite all this, he's worried about the sorting ceremony, where citizens on the cusp of adulthood are assigned their careers. The Chief Elder, played by an antiseptic-looking Meryl Streep doing her best school principal act, divvies their roles out one by one. While his friends are chosen as nurturers to the newborns and drone pilots, Jonas is selected to be the Receiver of Memory - a mysterious task that puts him under the tutelage of the Giver, a gruff-voiced, bearded Jeff Bridges.

The Giver helps Jonas transition from his "life of shadows" to experiencing real human emotions through shared memories and experiences like a gypsy wedding and sledding at Christmas time. These training sessions are essentially made up of GoPro montages backed by swelling orchestral music that manages to be more emotionally effective (or, manipulative) than the film's overall narrative. Images of birth, war, dancing, poaching, grief, and celebration assault the audience's eyeballs as Jonas struggles to take it all in without cracking under pressure.

Through it all, Thwaites has the depth of a birdbath. His wide-eyed naiveté is spot-on for the initial scenes in the film, but as Jonas' understanding grows, Thwaites fails to convey this arc in a successful manner. Even after gaining the Giver's vast knowledge of human history, it looks like there's nothing going on behind Thwaites' dreamy eyes. He delivers narration in a bored manner and spouts out bits of exposition with as much enthusiasm as a piece of set dressing. His love interest is played by Israel-born Odeya Rush, who manages to squeeze some emotion out of her character, Fiona, though she's not given that much to do but react to Jonas' revelations.

Thwaites' shortcomings are only highlighted more in his scenes with Bridges, who embodies the wise and assertive Giver. Underneath his steel exterior, Bridges shows the character's wounded side - the part of him mourning the loss of a loved one, a feeling no one else in the community can relate to. He butts heads with Streep, whose Chief Elder is a cold, calculating authoritarian. Near the end of the film, Streep presents her side of the argument. The cost of eliminating war and pain was the eradication of feelings and knowledge and memory. Isn't it worth it to have peace?

This argument is only briefly explored, however, as the film simplifies the human experience. There's good, there's bad, that's it. Like the Facts of Life theme song. Directed by Philip Noyce (Patriot Games, Salt) from a script by first-time screenwriter Michael Mitnick and documentarian Robert B. Weide (Woody Allen: A Documentary), The Giver can't quite seem to figure out if it's a sci-fi adventure movie or a meditative piece about the human experience. This muddled approach combined with poor lead acting adds up to one fruitless film going experience.

The inevitable climax is stunted by a sudden shift in pace during Jonas' exodus that nearly grinds the film to a screeching halt. Once his savior status is achieved, the film simply fades to black, which seems almost unfair after enduring 90 minutes of limp story. The film wants to deliver an important message, but Lois Lowry’s words have been turned into a movie that’ll surely be lumped together with other recent “young chosen one” films (Divergent, The Mortal Instruments: City of Bones) starring attractive tween newcomers.

Like the citizens of the film’s community with their memory wiped clean, the audience is bound to forget The Giver after leaving the theater.

Two out of five stars.