Gunman kills 4 children, himself after day-long standoff with Orlando Police 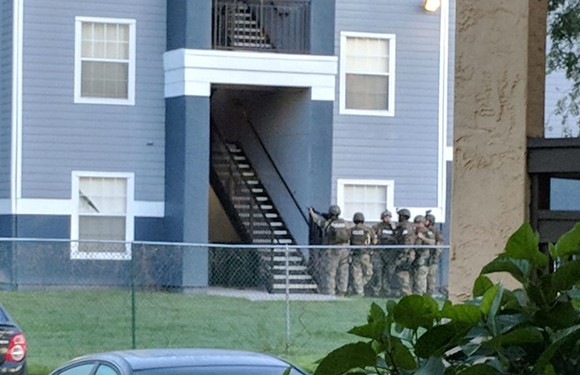 Photo courtesy of Samantha Kutter
A man shot and killed four children he was holding hostage at an Orlando apartment complex Monday night before turning the gun on himself, police say.

"We have no idea when those poor children lost their lives," Mina told reporters at a press conference.

The standoff between Lindsey and Orlando Police began more than 24 hours ago after officers responded to a domestic dispute at Westbrook Apartments on Eaglesmere Drive near Universal Orlando around 11:45 p.m. Sunday.

A woman reported that her boyfriend, Lindsey, had battered her. When officers went to arrest Lindsey, there was "an exchange of gunfire." Police say Lindsey shot Officer Kevin Valencia, who underwent surgery at Orlando Regional Medical Center and remains in critical condition. After the first shooting, Lindsey barricaded himself in an apartment with the four children.

Since Sunday night, authorities have been trying to negotiate a peaceful surrender from Lindsey, who is a convicted felon currently on supervised probation for a 2008 arson charge in Volusia County.


Mina says hostage negotiators were in "direct and indirect" contact with Lindsey throughout the day and as late as 9 p.m. The gunman's phone was having connection problems, so law enforcement officers tried to introduce one of their phones. Police saw one child was dead and started making plans to break into the apartment and rescue the other children.

Mina added that two of the dead children were believed to be Lindsey's.

"Our hearts go out to the families of those four children," Mina says.

This is a breaking news story. Check back here for updates.