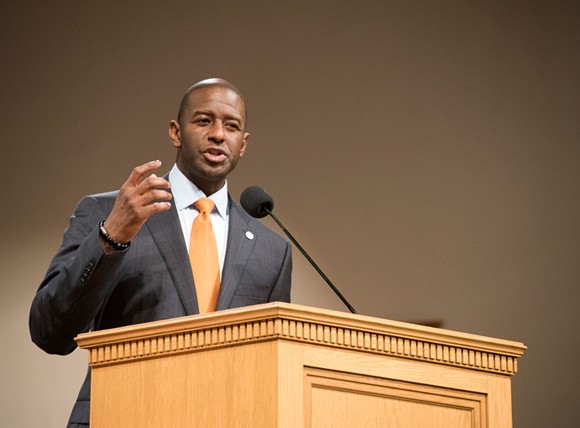 The Tallahassee Democrat reports Maddox and his longtime business partner, the city's Downtown Improvement Authority Executive Director Paige Carter-Smith, were charged with 44 counts of racketeering, bank fraud and extortion in a plot to solicit bribes from potential city vendors. Gillum was not named in the grand jury indictment released Wednesday, despite political attacks from opponents who claimed the Democratic gubernatorial nominee was the target of the FBI investigation and President Donald Trump calling Gillum a thief without evidence.

During the 2018 campaign, Gillum repeatedly said the FBI told him he was not the "focus" of that investigation and called any allegations that he was being pursued by the FBI "false." The Florida Commission on Ethics is investigating a separate complaint about Gillum's trips to New York City and Costa Rica with a former lobbyist.

Both Maddox and Carter-Smith have said they are innocent, according to the Democrat.

The indictment alleges Maddox and Carter-Smith conspired to operate two companies as one entity collectively referred to as "Governance."

"Governance was part of a racketeering enterprise that extorted money and accepted bribes from Governance clients under color of Maddox’s office and through fear of the economic harm that Maddox could inflict in his position as an influential City Commissioner," according to a release from the U.S. Attorney's Office for the Northern District of Florida. "The indictment alleges that Maddox voted on matters and exerted influence on City employees to take actions that benefitted the businesses that paid Maddox and Carter-Smith through Governance."

The indictment also accuses Maddox and Carter-Smith of making false statements to the FBI regarding Maddox’s affiliation with the two companies. Additionally, Maddox is accused of lying under oath to a Florida Commission on Ethics investigator and hiding his dealings with potential city vendors from the city's attorney and commission.

"Maddox and Carter-Smith also defrauded a bank of more than $250,000 through two fraudulent short sales of real property, lied to federal agents about Governance and other matters, and violated federal tax laws by conspiring to interfere with the IRS and filing false tax returns," the release said.

A trial date will be set this afternoon at a hearing on the case in federal court.