Send a News Tip
THIS LITTLE UNDERGROUND
It’s the last issue of 2018 so time to officially shout out the year’s local superlatives with the annual TLU Underground Awards.

Development of the year: New venues
As outlined in the live venue recap of last week’s column, 2018 saw the most new stages come – and sometimes go – in recent memory. We still don’t know the full impact of this year’s activity yet, but it’s been breathless and energizing. And it’s left some new horizons for enterprising scene-makers.

James Dechert
Iron Cow
Biggest roller coaster: Firestone complex
At first, word of Blackstar materializing as a venue electrified the music scene. Once the whole vision was rolled out, it included sister club Odd Jobs, a total venue overhaul of the historic Club Firestone named the Vanguard and talk of more action on the back festival grounds. The whole Firestone block was going to rise again as a fleet, and it was looking like a juggernaut. Then Blackstar/Odd Jobs was sold and is now back up for sale. For now, though, the Vanguard transformation is still underway with a new spring target opening.

Jen Cray
Blackstar
Best national emergence: E-Turn
Decorated rapper E-Turn has been an Orlando legend for years now, rolling hard as the marquee next-gen force of the Second Subject crew and Swamburger’s brightest protégé. But this year, the rest of the world should know her name because she just released her solo debut album (Young World) on credentialed vanguard alternative-rap label Fake Four, officially putting her alongside figures like Ceschi, Astronautalis, Sadistik, Onry Ozzborn, Busdriver, Moodie Black and Bleubird.

Jen Cray
E-Turn at Iron Cow
Best cameo: Swamp Sistas with Cyndi Lauper
Proving that girls don’t just wanna have fun but also lift each other, Cyndi Lauper personally tapped several noted Orlando songbirds to join her onstage over the summer at the Amway Center. Swamp Sistas Beth McKee and Zoya Zafar, as well as American Idol contestant Alyssa Raghu, were brought up to help make Lauper’s most famous smash hit sing with bright local color in front of an entire arena.
Best live recording series: Melrose in the Mix
Although in its second year, this monthly live session at the recording studio of downtown’s Orlando Public Library still exists lower on the radar than it should. That’s too bad because a whole lot of music fans are missing out on sitting inside a state-of-the-art studio while some great local artists do tape-worthy performances up close for free. From the musicians to the producers to the organizers, lots of people are doing good work here. Go witness it live.

Jim Leatherman
Terri Binion at Melrose in the Mix
Biggest level up: Folk Yeah
The annual, post-Thanksgiving singer-songwriter showcase by esteemed Orlando roots rocker Mike Dunn celebrated its third year by going from a one-night, single-venue show to a three-day festival and market spanning the entirety of the Will’s Pub complex. And it did it with that signature familial vibe beautifully intact.

Jen Cray
MIke Dunn's Folk Yeah
Best honorary Florida citizen: J. Robbins
J. Robbins has immortalized himself in the canon as both musician (Jawbox, Burning Airlines, Government Issue, etc.) and producer. But it’s as the latter that the D.C. punk icon has endeared himself to the Sunshine State this year, helming two excellent albums by Orlando’s the Pauses (Unbuilding) and Tampa’s Pohgoh (Secret Club).

(via Bandcamp)
J. Robbins
Best successor: Christopher Belt at the In-Between Series
When art scene iconoclast Pat Greene vacated his position as director of downtown’s Gallery at Avalon Island this year, his exceptionally adventurous live music monthly there could’ve easily exited with him and left a big hole in the city’s experimental music fabric. Instead, he passed that singular torch to Christopher Belt, one of Orlando’s most credentialed presenters of forward music (Accidental Music Festival, Timucua Arts Foundation, Alterity Chamber Orchestra, etc.). And so the In-Between Series shines on.

(via Facebook)
Christopher Belt
Most unlikely rap impresario: Endoxa Booking
Although Endoxa boss Pete Olen has long had deep stature in the heavy music world, the Orlando-based promoter has been notably expanding his palette of late. Few, however, could have predicted that he’d become one of the city’s most eminent patron saints for alternative rap. This year, Endoxa brought a legit parade of touring icons that are expanding and advancing the concepts of hip-hop including Ceschi, JPEGMAFIA, Milo, Prof and Moodie Black. 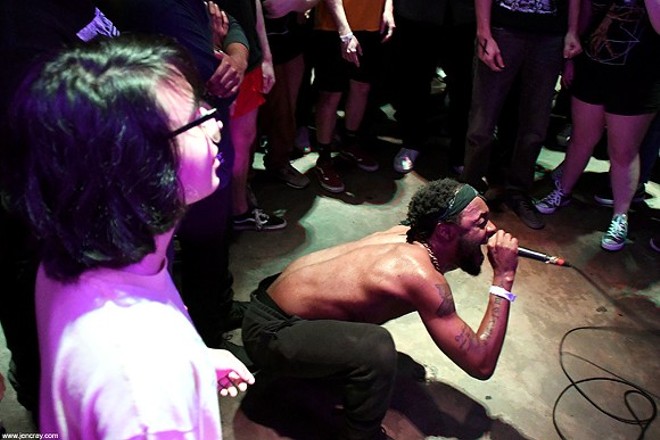