Orlando Shakes brings vitality and magic to a classic musical, ‘The Fantasticks’ 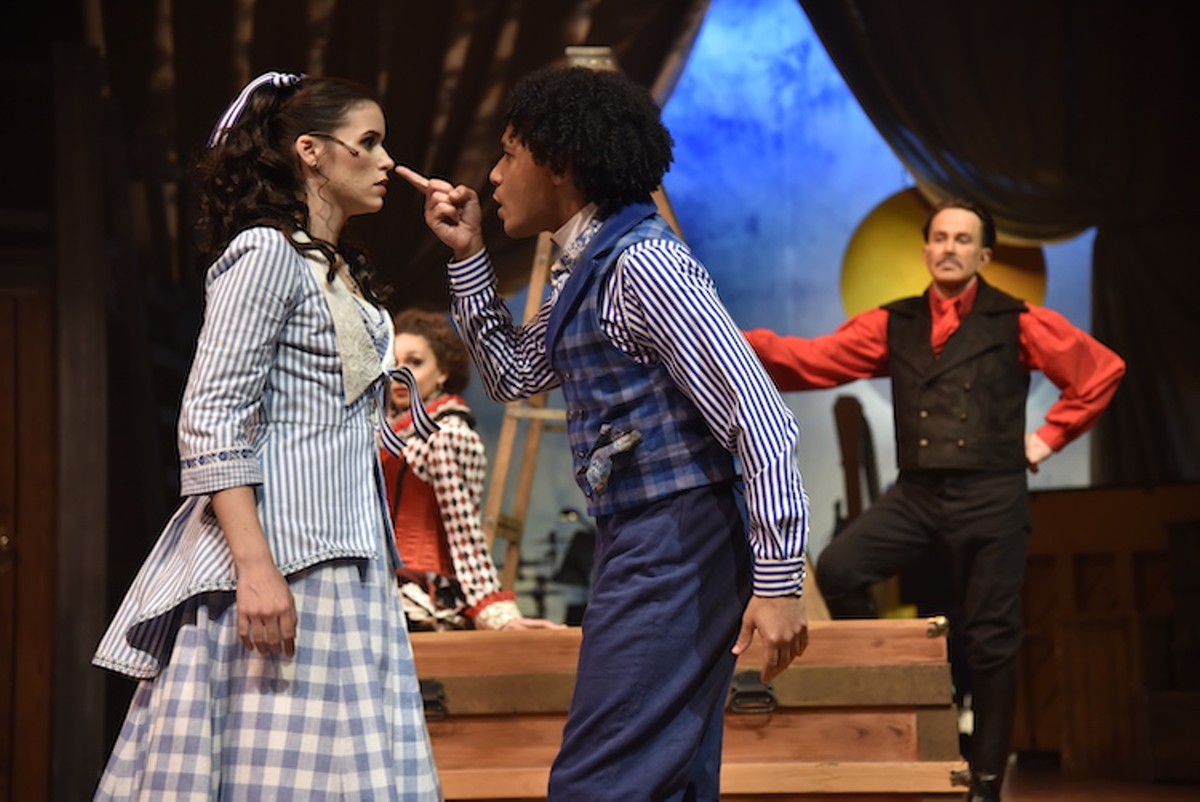 Audiences often don’t realize how much effort and dedication goes into staging a script — especially when the words themselves were written more than 50 years prior. It is exceedingly difficult for directors and performers to discover new moments and beats in a story that has been performed thousands of times before. This makes Orlando Shakes’ 2022 production of The Fantasticks all the more impressive.

The inaugural production of The Fantasticks hit the off-Broadway stage in 1960 and ran for a total of 42 years, totaling 17,162 performances — solidifying its position as history’s longest-running musical. Loosely based on the play Les Romanesques by Edmond Rostand, the Tom Jones–Harvey Schmidt musical shares the journey of two young lovers, Luisa and Matt. They live next door to one another, but are kept apart by a wall their fathers built due to a so-called “family feud.”

On the Shakes stage, Valerie Torres-Rosario’s sound soprano vocals as Luisa shine magnificently throughout both her solo moments and group numbers. She’s captivating as she develops from naive, doe-eyed ingénue to mature, self-aware adult. Her counterpart Damian Barray, in the role of Matt, exudes a youthful boundless energy that’s more than enough to convince viewers of his undying adoration. Their chemistry is particularly heartwarming in one of the show’s final moments, “They Were You.”

El Gallo serves as the mysterious and alluring narrator of the tale, and Broadway actor Davis Gaines elicits curiosity and wonder in a memorable performance. A noteworthy moment is his strong baritone delivery of the classic “Try to Remember.” In addition to Gaines’ stage presence in a narrative role, he also embodies Gallo’s position as the primary antagonist with ominous charisma.

Other characters may have noticeably more stage time, but some of the most charming moments of the production came from Philip Nolen and Brandon Roberts in the roles of Henry and Mortimer, El Gallo’s comical accomplices. Joshian Morales’ direction of the two veteran performers is delightfully indulgent of physical comedy, theatrical nonsense and energy vibrant enough to bounce off the back wall of the theater.

Another comedic duo worth noting is E. Mani Cadet and Bert Rodriguez in their roles as the young lovers’ fathers, conspiring to hatch a plan regarding their children’s romantic endeavors. Their rendition of “Never Say No” in particular was wonderfully amusing, with lyrics that have held up surprisingly well against the test of time. Admittedly, the pair’s musical numbers revolving around the joys of growing vegetables compared to raising children felt somewhat contrived as opposed to naturally integrated into the plot, but that is the fault of the source material, not those attempting to do it justice — and these two did an outstanding job.

Matti Endsley’s commitment in her role as The Mute brought a sparkle of joy each time she entered the playing space — who needs words when you’ve got such compelling movement and silent storytelling abilities?

Adding to the few timeless elements of the original script is the modern tone of the score. The Orlando Shakes production puts the orchestra on display upstage, allowing the audience to soak in the emotional depth of the more moving numbers. John C. Cavazos and John de Haas’ combined musical direction allows the instruments to play integral roles, adding to the fantastical nature of the show.

The creative elements of the Shakes’ production help sell the reality of the lives of these quirky characters. Denise R. Warner’s vibrant costumes, Philip Lupo’s creative lighting and Ruthmarie Tenorio’s wooden set design all come together to do nothing short of enthrall.

The Orlando Shakes production of The Fantasticks not only makes me appreciate directors and creative teams who decide to put their own spin on ossified classics; it reminds me just how wonderful it feels to go to the theater and see a cast completely invested in the story they’re telling. Sure, there are elements of the 1960s script that should be handled with care and possibly improved — changing “rape” references to “abduction” is just the tip of the iceberg — but the cast and crew of this production should be proud of their take on such a treasured love story.