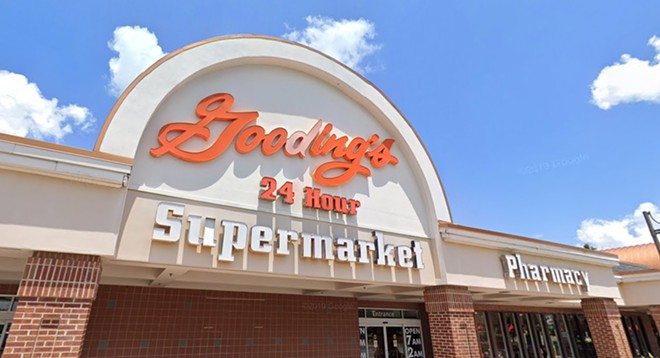 Image via Google Maps
Goodings at Crossroads Plaza
After more than a decade of planning, the popular Crossroads Plaza at Walt Disney World's entrance is now just months away from permanently closing. But O-Town West in southwest Orlando will inherit many of Crossroads' tenants.

The Lake Buena Vista plaza's fate was secured in 2019 when after months of negotiating with the Florida Department of Transportation (FDOT), the tenants agreed to a three-year wind-down that would ultimately close the plaza in August of this year. The final aspects of the complex eminent domain case were settled earlier this year. The plaza’s owner, U.S. Cities Fund, was represented by GrayRobinson, who claims the $198 million agreement is the largest settlement of its kind in Florida’s history.

Image via FDOT
Renderings of the updated Beyond the Ultimate I-4 interchange with 535. The green area in the upper right corner is the current location of the Crossroads plaza.
FDOT plans to level the 36-acre plaza to make way for a new interchange between 535 and Interstate 4, including a large circular ramp leading off 535 onto Disney’s property. Beyond the two ramps crossing through the property, the rest of the site will be used for water retention. The project is part of the larger 20-mile "Beyond the Ultimate" project that will see updates to I-4 leading from Kirkman Road to Highway 27. It's the next chapter in the I-4 Ultimate project currently underway through much of Orange and Seminole counties.

Crossroads provided one of the few large drainage opportunities in that stretch of the road since the nearby Reedy Creek Improvement District has much more stringent drainage rules, resulting in higher costs to the project. 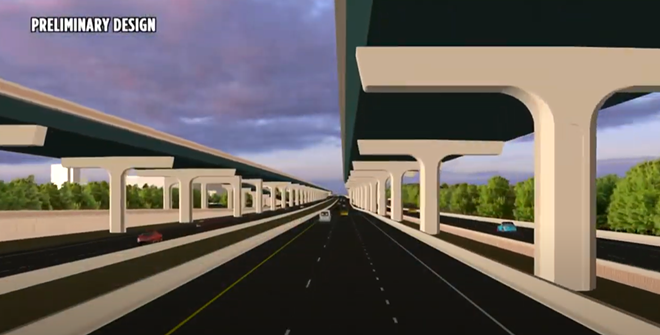 Image via FDOT
Concept art of what I-4 will look like in the area near WDW once the Beyond the Ultimate project is complete.
On the stretch of I-4 near Walt Disney World, the road will have a double-deck section with through lanes on the top and merging lanes down below. On 535, the updates will include multiple new bridges, flyovers and interchanges to help limit the backups onto I-4 that are common today. This should also help alleviate traffic at the Hotel Boulevard/Crossroads interchange, with many of the through traffic lanes flying over this interchange altogether, similar to interchanges at Colonial Drive and Semoran Boulevard in east Orlando. 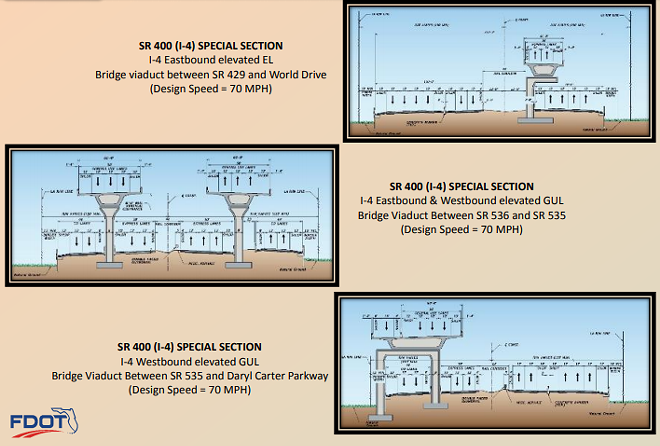 Image via FDOT
The pandemic has sped up some of the closures within the Crossroads Plaza, with Gooding’s, Sweet Tomatoes, and other businesses permanently closing last year. Others are moving to new locations nearby. Just east of the 535 interchange is Daryl Carter Parkway, currently only a bridge over I-4, but it will see a full interchange built in the coming years.

That’s where O-Town West is located. Previously envisioned as a luxury development with Vegas-style amenities, the development has been downgraded into a mix of smaller developments with a large strip mall and surface parking lot at its core.

Many of the former tenants of Crossroads will open new locations in O-Town West. A small section of O-Town West called The Crossings will be home to Wendy’s, Tijuana Flats, World of Beer, BurgerFi, Dunkin and other dining options. Across Palm Parkway in The Village section of the complex will be Jeremiah’s Italian Ice, Taco Bell, Flipper’s Pizza, Vitality Bowls, Wawa, Portillo’s and the world’s largest White Castle. The Town Center section that fronts Apopka-Vineland Road will house a new McDonald’s, Publix, Planet Smoothies, Mooyah, Cold Stone, Gator’s Dockside and other strip mall retailers. A Zen Hotel, two apartment complexes, a subdivision of 250 townhouses, a high school, and the Marriott Vacations headquarters will also be located in the development. Image via Unicorp
An overview of the O-Town West development, now under construction
Unlike Crossroads, O-Town West will be accessible via multiple roads, but the location will mean a further drive for most tourists. It will also not feature the visibility that made Crossroads so successful.

Crossroads also benefited from the nearby housing for Disney’s college program, though it's unclear if these complexes will reopen when the college program relaunches. Instead, Disney has added a massive new 10,400-bed complex for the program in its Flamingo Crossings development on the opposite side of the resort. That mixed-use development, with its own strip plaza style retail corridor, can be viewed as the spiritual successor to Crossroads due to the many parallels the two projects share.

Together O-Town West and Flamingo Crossings will meet the needs that Crossroads used to fulfill, but after more than three decades in operation, Crossroads will still be missed. 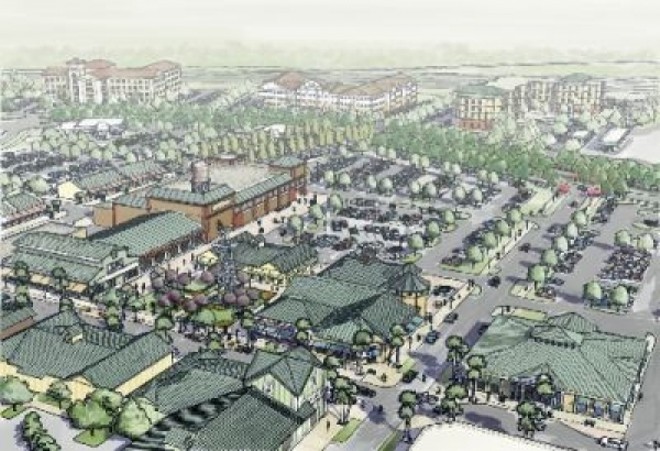