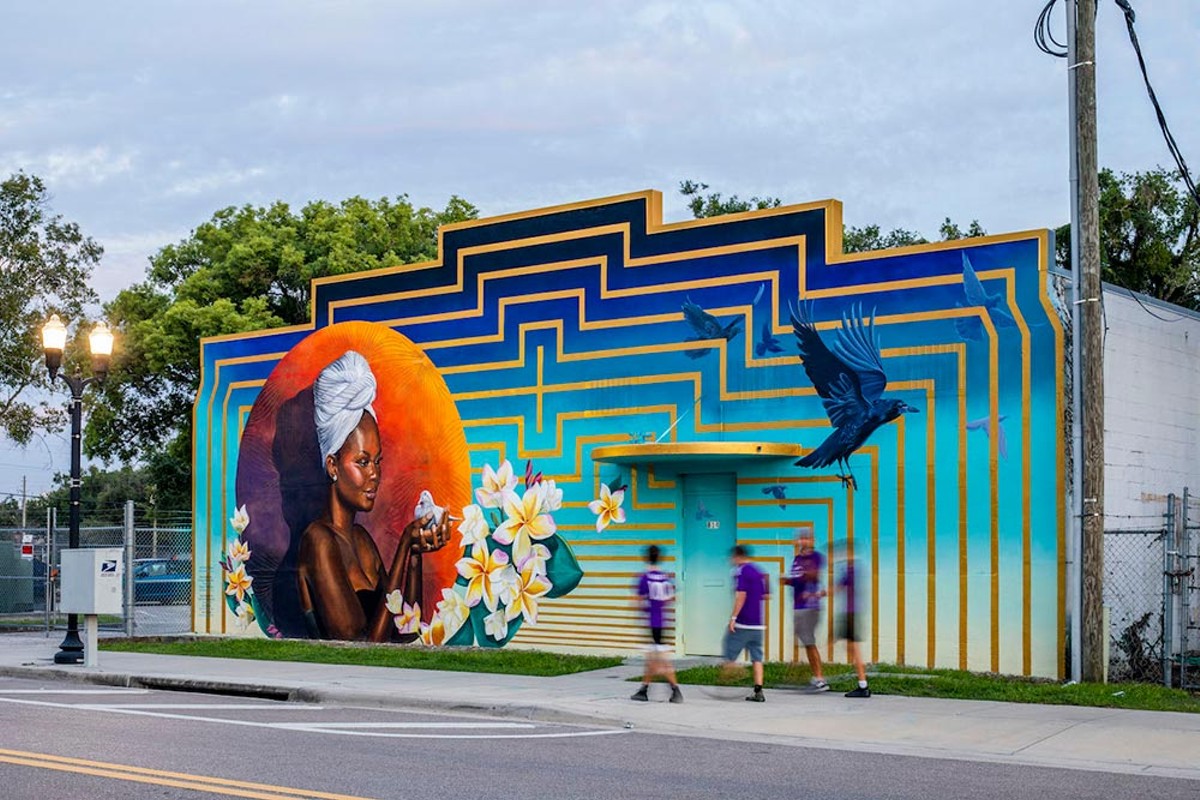 Volunteers are setting up tents, chairs and tables in a parking lot outside a gray office building in the Parramore neighborhood of Orlando the day before Thanksgiving. It's an ambitious event promising dinner, drinks and dessert, as well as providing free vaccines, health care information, clothing, haircuts and personal care bags at no cost to community members. By 11:30 a.m., a line has already formed on the sidewalk just outside the steel gate.

Volunteers at this "Thanksgiving With a Friend" event wear gray T-shirts depicting the bygone "Unity" mural that once adorned the wall of this building, the home of architecture firm Interstruct Design + Build. In August 2020, Interstruct principal Ryan Young commissioned local artist Maureen Hudas to paint a mural of Florida-based Haitian activist Jennifer Desire. The resulting artwork became both a meeting place and celebrated space in the community.

Desire is here this morning, offering humble advice and comments to the volunteers. Just before the gate opens, she shares last-minute directions with the group, who have gathered in a circle holding hands. She thanks them for being there and says, "We just want to show them some love today."

In 2021, Desire and Interstruct hosted a similar Thanksgiving event under the gaze of the Unity mural. But in 2022, the mural was decommissioned — "decommission" simply refers to the removal of an artwork — as the Interstruct building underwent extensive renovations. 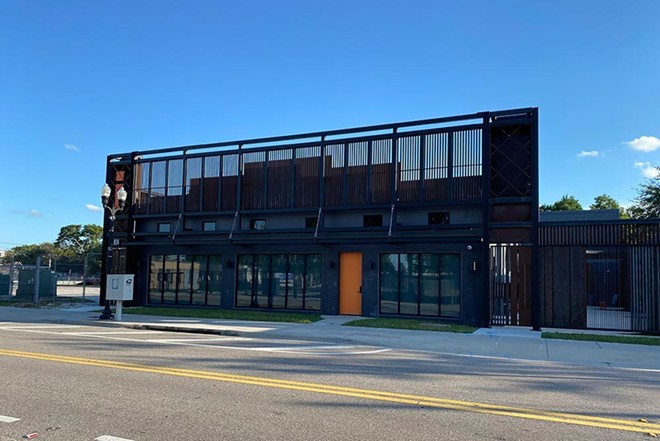 Following the decommission of Desire's portrait, Snap! Orlando stepped in to give the mural further exposure as part of their interactive Augmented Reality program titled City Unseen. The mural can be viewed by downloading the app (at snaporlando.com/city-unseen-orlando), selecting the location and aligning a virtual marker with an element in the street. At that point you can access moving views of the mural as well as audio and interactive elements. It is an original approach in Central Florida to documenting and giving ongoing exposure to art works that no longer exist in material form.

Patrick Kahn, founder of Snap, explains that his work with City Unseen "goes beyond the preservation of a mural, because you'll never have that physical mural again." The project's several Augmented Reality murals accessible through the City Unseen app offers interactive elements and 3D animation, preserving the mural within virtual reality.

In preserving Hudas' mural of Desire, Kahn wanted the subject's voice to be present. Desire agreed. "We let her speak freely with very little limitations in terms of time," he says. "We told her the concept, but it's her words and what she wanted to say." At one point in the recording, Desire simply states, "Help me spread peace and hope in the community."

There are some limitations to the augmented reality mural. Many community members who used to be able to see the mural while walking past don't have access to this technology because they might not have cell phones or might have difficulty accessing apps. It makes one wonder who exactly benefits from the augmented reality mural. Snap's website boasts that it received the 2019 Innovation and Technology Golden Brick Award as a "groundbreaking Orlando art project" and urges visitors to "get out and experience Orlando in new and incredible ways!" (NB, Snap as an organization has been steadily doing good work in the city of Orlando. While many museums lost public trust and relevance during the pandemic, Snap was able to pivot and remain relevant by focusing on partnerships and public art initiatives.)

That statement — "get out and experience Orlando" — underscores the need for more open-access oral history projects with archival practices in mind. Could Augmented Reality be a strategic solution to the thorny topic of Parramore gentrification? Around the country, the conservation of murals is considered critical to the visual identity of neighborhoods. Some nonprofits exist for the purpose of mural conservation. And when conservation fails, archival methods come into focus.

At the crux of archival practices around public art — specifically, community murals — is the issue of representation and the question of how helpful it is to create artworks that ultimately cannot be sustained. Decommissioning these works raises questions about how we value artistic and historical contributions.

The decommissioned mural depicting Desire speaks to a shifting visual and cultural identity in the Parramore neighborhood and the region. Orlando is often associated with complex analogies of nostalgia, joy, and excess, but people who live in Central Florida want an arts community that is both inclusive and intersectional. The loss of this particular mural, and the broader gentrification of Parramore, is an emotional and material loss for the people who live here. The virtual mural becomes a metaphor for memory, representation and identity in a community living through rapid change.

As Desire said at the Thanksgiving event, "[A] majority of the murals you see around the world are not Black women." She adds that she wants the people in Parramore to know: "You can just be a normal person and do what I'm doing."

The Parramore Unity mural has become a gathering place for community members — and both Interstruct and the Jennifer H. Desire Foundation, formed after the mural went up, want to ensure that continues. Despite all the best intentions of creating the mural and attempting to preserve its memory, the situation of this specific mural and the strategic path for public art in Central Florida remains ambiguous and complicated. However, at the end of the story what's most compelling is the allyship and collaboration that are still in place to this day. The Desire Foundation continue's Jennifer Desire's work, strengthened by new partnerships. This demonstrates that the power of art can be transformative, and that this particular mural — both in portraying a young Haitian activist and becoming a meeting space for community members — was ultimately successful, despite no longer being immediately visible.

As Desire says, "Yes, the mural was there, but the work we do is way more important."