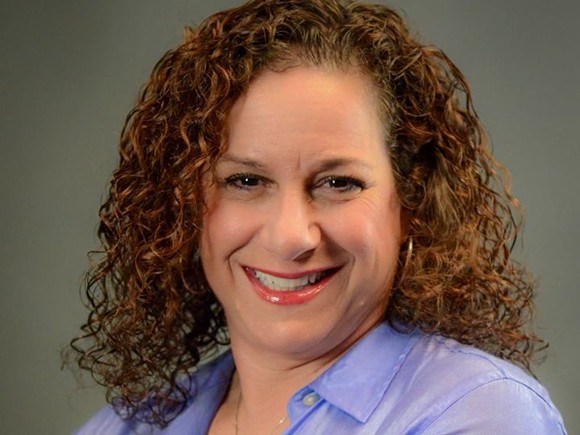 Updated May 1 | Corrected to reflect Dictor will appear next on the Nov. 3 ballot, and to include additional information on Greenberg's campaign contributions, private blockchain company and official contracts.
_

"Not even a lockdown could stop the campaign of Lynn Moira Dictor, a first-time candidate for Seminole County Tax Collector," said her press release Thursday.

Dictor is best known to Central Floridians as "Moira" from her 20 years on WTKS Real Radio 104.1's "The Philips Phile." The 59-year-old Lake Mary resident has been a news reporter, anchor, news director and talk show host. She received the 2019 Harvey Milk Ally Award from Orlando's LGBTQ Center, and serves on the board of directors of A Gift for Teaching, as well being a past president of the Congregation of Reform Judaism.
Dictor is vying for Republican Greenberg's job, with two other Republican challengers also running against him. Dictor received early support from elected Democrats, including a November 2019 fundraiser cohosted by state Sen. Linda Stewart, state Rep. Anna Eskamani and Ruth’s List president Pamela Goodman.

Dictor says she always intended to qualify by petition for her spot on the November 2020 ballot, before shelter-in-place orders prohibited her team from attending gatherings with eligible Seminole County voters. On March 1, Dictor was 960 verified signatures short of the 3,037 needed by the May 11 deadline, but Dictor's campaign writes she "was undeterred."

They maintained social distancing while they called, emailed, texted and slid petitions under the doormats of voters. Dictor revived her radio skills for a series of daily Facebook live videos called "Couch Chat," designed to build a following and gather petitions. The team says they reached their goal on Wednesday.

Her name will appear on the Seminole County ballot against Greenberg or one of his Republican challengers in the general election election on Nov. 3.

Greenberg has asked for his fair share of controversy, starting in August of 2018, when he was called upon to apologize or resign after he shared bigoted posts about Muslims, including one saying, "Very simple question...Name just ONE society in the developed world that has benefited in ANY WAY from the introduction of more Muslims. Just one. Asking for a friend."

It turned out to be part of a long history of ugly online behavior. Greenberg hung on, despite multiple protests by local Muslim advocates, continuing to tweet through the controversy. At one point he got angry online with Eskamani, then a candidate for Florida House, threatening to donate $200,000 to her opponent.

In October 2018, Greenberg was revealed to be a member of Teens for America First, a Facebook group littered with racially charged and anti-Semitic content, including a post in which one member suggests the Jewish people are to blame for the terrorist attacks of Sept. 11, 2001, along with Republican state representatives Mike Miller, Scott Plakon and Bob Cortes.

Later that same month, a Muslim woman who Greenberg had fired from the county office filed a discrimination lawsuit against him, which caused advocates to again press for his resignation. Even later that same month of October 2018, other former employees of Greenberg's alleged he fired them for supporting his incumbent Republican opponent in the 2016 primary.

Less than a year later, in September 2019, Orlando Sentinel's Martin E. Comas reported on Joel Greenberg forming a private company, housed within his public office, as part of his official plan to "migrate information from drivers licenses, property taxes and other functions onto an encrypted data base using cutting-edge blockchain technology."

That "unusual arrangement," says Comas, was set up at same time Greenberg filed for reelection, despite his campaign pledge to serve only one term. Greenberg described the private venture then as a "public-private partnership" within his office and "the wave of the future."

In October 2019, Orlando Sentinel's Lauren Ritchie uncovered consultant contracts and salaries Greenberg had handed out to friends and associates totaling $3.5 million. Her report said Greenberg planned to spend $109,000 on his new blockchain document project. Ritchie's report also documented how Greenberg awarded high-paying positions and contracts "to friends, business partners, childhood chums, campaign associates and a half dozen folks who either were part of his wedding party or close enough to attend the tony affair just months before he was elected."

Earlier this year, Greenberg was accused of plotting a Bitcoin ransom scheme against his own office by another former employee.

Greenberg, whose Facebook cover photo shows him speaking at a Sanford rally for Donald Trump, has posted selfies on Twitter with Roger Stone and far-right agitator Milo Yiannopoulos. Dictor will face off against one of three Republicans, either Greenberg himself, or challengers Chuluota teacher Brian Beute, or Sanford businessman J.R. Kroll.

"I am so heartened that Seminole County residents desperately want a change," said Dictor on Thursday. "And they showed that by propelling our campaign over its first major hurdle, we can now focus on bringing good stewardship back to the office of Seminole County Tax Collector."

Corrected to reflect Democrat Katrina Shadix left the tax collector race to run against Republican Seminole County District 1 Commissioner Bob Dallari. Dictor faces no primary opponent on Aug. 18 and will only appear on the Nov. 3 ballot.
_
Please follow CDC guidelines and Orange County advisories to stay safe, and please support this free publication. Our small but mighty team is working tirelessly to bring you news on how coronavirus is affecting Central Florida. Please consider making a one-time or monthly donation. Every little bit helps.