And Orlando's Signature Dish is...

The day that many of you likely weren't waiting for is here. Today, the wizards at Visit Orlando announced Orlando's Signature Dish.

Yes, folks, this is the dish that will forever be associated with Orlando (their words); a dish we'll be known for the world over; a dish every self-respecting restaurant in the City Beautiful should rightly serve, so let's get to it.

If you recall, Visit Orlando (with an assist from Orange County Mayor Teresa Jacobs) got the idea earlier this year to foist a signature dish on our fair city. A committee of gastronomes gathered and decided that the signature ingredient of said signature dish would be, umm, honey — a "no-brainer" decision, according to a Visit Orlando social media post.

Chefs submitted their entries, 10 finalists were selected by popular vote, and today a panel of judges announced the winner.

[Why, of all things, honey? Be sure to read Monivette Cordeiro's story in next week's issue for all the dirt.]

So, without any further ado, Orlando's Signature Dish or, rather, Orlando's
Signature Honey-Based Dessert is... 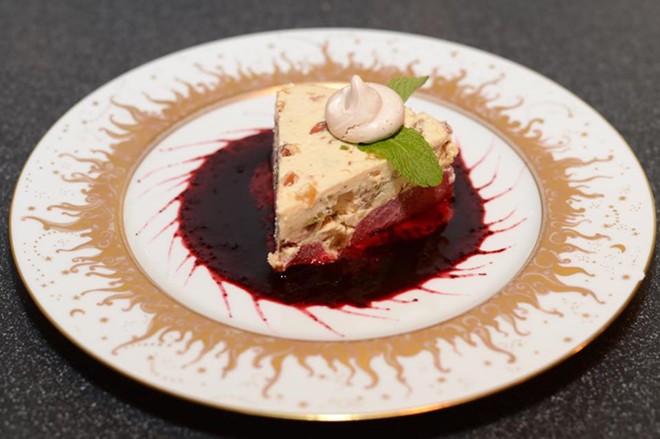 Now, I'm sure chef Catherine Delrieu's winning dish – an Italian meringue with honey, nougat, and fruit confit on a red berry sorbet – is a fine dessert, but honey nougat glacé doesn't exactly roll off the tongue, now does it? Nor can you see mom-and-pop restos around the city readily slinging it, à la Key lime pie. Nor is it a dish that evolved organically.

If there is a food that evolved organically in our midst, and one that  immediately comes to mind for both tourists and locals alike, it's the much-
disparaged turkey leg.

But let's face it, Orlando wouldn't be Orlando without Disney: Disney kick-
started our thriving and diverse food scene, and that food scene was spawned, arguably, by the turkey leg.

Even James Beard Award-winning chef Art Smith, who also happens to be one of the judges in the signature dish competition, told us this summer that the turkey leg should be Orlando's Signature Dish.

So I say, let's accept it, folks. Let's wholeheartedly embrace the turkey leg
as our signature dish. Let's appropriate it from the schlocky purlieu of
theme parks and give it the proper gastronomic attention it deserves.

Let's roast it. Sear it. Citrus-marinate it. Let's Korean-fry it. Hell, let's
honey-glaze it and make the fleshy appendage a common sight from food trucks to fast-casual eateries to fine dining establishments across the city.

In the meantime, if you'd like to sink your teeth into Delrieu's honey nougat glacé — Orlando's Signature Dish — the dessert will be available at Mon Petit Cheri Cafe in Winter Park.