Adobe
We live in the stupidest country.

The University of Florida has renamed a study room honoring economist and philosopher Karl Marx following the Russian invasion of Ukraine.

The room in UF's Library West was named for the Prussian historian as part of a wider initiative to celebrate influential thinkers. A plaque outside the room has explained the impact of the "revolutionary critic" since 2014. The move to remove it comes after pearl-clutching, conservative college outlet Campus Reform reported on the plaque earlier this month.

The move is the latest example of a deeply stupid wave of reactionary anger against Russia following their invasion of Ukraine. We would expect a state university to know better. But just in case you need a primer, there are a laundry list of reasons why this move makes zero sense.

The first and foremost reason? Karl Marx was not Russian. He was born in Prussia, in a city called Trier that is currently part of Germany. Marx never lived in Russia, spending most of his adult life between London and Paris.

One more for good measure? Russia is not a communist or even socialist country. They do not subscribe to the teachings of Karl Marx. The country has spent the last 30 years under one of the most brutal and unequal examples of capitalism on the planet. A baby born on the last day Russia was nominally under the rule of a Marxist-Leninist government is highly likely to have young children of their own by now, seeing as they are pushing 31. Let it go. 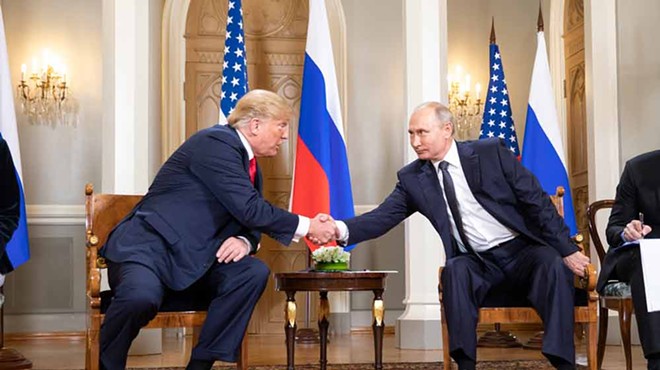 Putin’s investment in Donald Trump was designed to soften the ground for an expansion of Russian power into Ukraine: Blood and oil: The remix


The rush to rename the study room is part and parcel of a larger backlash against anything that reads as vaguely Russian. Those half-witted surges of uneducated id have even made their way to Orlando. The Russian Ballet of Orlando has faced threats and online harassment in spite of the fact that its founder is a Ukraine-born Russian who was raised in Kyiv.

Look, we understand the urge to want to do something. When global tragedy strikes in a world that forces you to engage with far-away places you can't possibly affect, many people will do anything not to feel powerless.

But we can promise you, throwing out bottles of dressing or dunking on a philosopher whose bones have long since turned to dust is not helping. Hundreds of thousands of people in the streets of our own country couldn't sway its imperial plans. What makes you think Russian leadership cares about consumer choices of Floridians?

What you can do is support our local Ukrainian community in this truly tough time. There are plenty of businesses that could use your patronage.