Who is this man? Please RT, find him & ask him why he did this? Where is the humour in humiliating slaughtered animals? @ChrisGPackham pic.twitter.com/uHN37OywCx

Despite an uncanny resemblance, it would appear that University of Florida head football coach Jim McElwain is not the bare-assed shark humper seen in a photo that has gone viral over the past week.

McElwain repeatedly denied the allegations, and so has Jimmy John's owner Jimmy John Liautaud. But now it seems the actual culprit is a guy named "Sean" from upstate New York.

"This guy lives in upstate New York, that photo was taken two years ago off the shores of Long Island — not in Florida," said WKMG's David Pingalore on Mike Bianchi's 96.9 show "Open Mike."

Pingalore says that a viewer reached out to him and claimed that he has photos to prove the identity of the shark humper.

However, even though the whole thing was considered a joke at the time, the guy won't come forward because he fears for his life.

"The man that is naked on the shark is afraid for his life because he believes bounty hunters — I’m not making this up — and people with shark people, whatever those people would be called … he’s afraid because the New York Post put up an article about ‘who is this naked man’ on the naked shark," said Pingalore.

What a time to be alive. 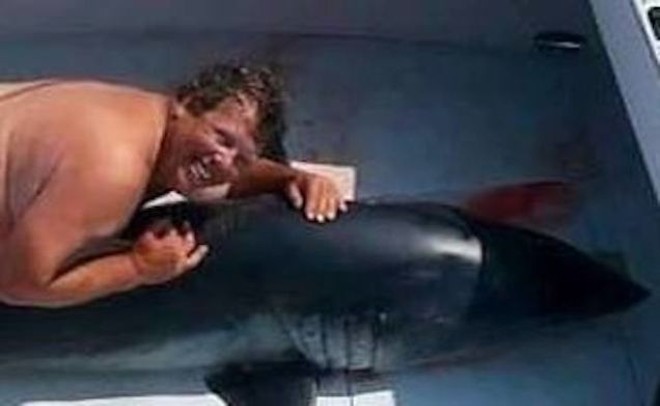