Starbucks workers at the East Mitchell Hammock & City Plaza location were the first in Central Florida to vote to unionize. 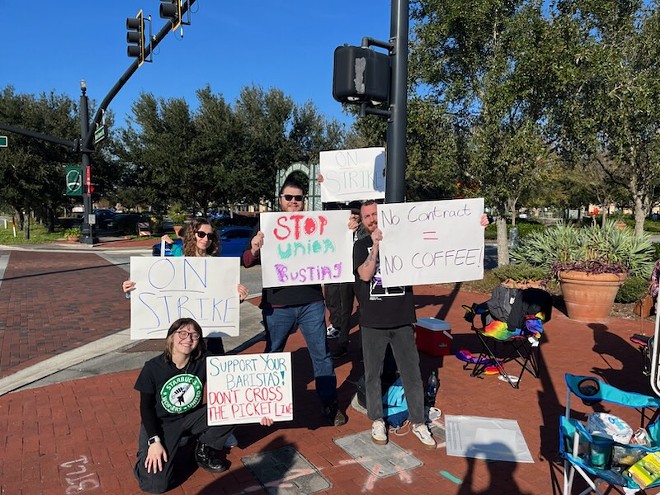 Starbucks workers at Central Florida’s only unionized store, in Oviedo, joined a national strike action on Saturday, along with roughly 1,000 workers at over 100 Starbucks locations elsewhere in the U.S.

Starbucks Workers United has dubbed it the “Double-Down Strike.” After kicking off Friday, it’s set to last three days for some stores — Oviedo workers are just joining for Saturday — in what the union says is the longest collective action the union has organized since the campaign first kicked off last year.

It comes just one month after workers held another national action, dubbed the “Red Cup Rebellion,” in which more than 1,000 baristas at more than 110 Starbucks locations participated.

“They’re doubling down on their union-busting, so we’re doubling down, too,” Michelle Eisen, a barista and union leader at the New York Starbucks that was the first in the U.S. to unionize, said in a statement. “We’re demanding fair staffing, an end to store closures, and that Starbucks bargain with us in good faith.”

More than 264 of Starbucks’ 9,000 corporate-owned stores in the United States have voted to unionize since last December, including one that’s local. Starbucks workers at the East Mitchell Hammock & City Plaza location voted to unionize in August, becoming the first in Central Florida to do so.

But, according to shift supervisor Clay Blastic, who works at the Oviedo store, Starbucks management has yet to come to the bargaining table with workers to negotiate a first contract.

“We were supposed to have an initial bargaining session, I believe, in early November,” said Blastic. But then, he said, that began to fall apart nationwide, including at most or all of the unionized stores in the South.

Blastic said Starbucks finally began to roll out a credit card tipping option at his location in mid-November, which can add about $2 to $3 an hour to someone’s pay, per his estimate.

But, he says, last week Starbucks management rolled that back, just in time for the holiday season. “Going into the three busiest weeks of the year, that’s just like, a vastly severe pay cut,” said Blastic, who said workers’ base pay at his store ranges from $15 to $17 an hour for baristas, and $19 to $20 for shift supervisors like himself.

This isn’t a surprise, necessarily — just disappointing for union workers.

Starbucks CEO Howard Schultz has been criticized for his potentially illegal move of guaranteeing job benefits and perks to workers at specifically non-union stores, in potential violation of federal labor law.

Starbucks has also been on the hot seat with the feds for retaliatory tactics since the unionization campaign began — which include but are not limited to firing union leaders, cutting workers’ hours, and shutting down stores where workers have voted to unionize.

According to Starbucks Workers United, the National Labor Relations Board has issued over 45 unfair labor practice complaints encompassing over 900 alleged violations of federal labor law.

Blastic, who’s worked for Starbucks at different locations for roughly nine years, said he and others at his store have also had their hours cut since voting to unionize. And that’s unusual, he said, for this time of the  year.

On the phone with Orlando Weekly, another worker shouted from the picket line that they’ve recently had their hours cut from 30 to 20 hours a week.

Some workers are fighting to pick up more shifts, said Blastic, “And other ones are just like, hey, I can’t — I gotta go find somewhere else.”

Saturday’s strike at the Oviedo Starbucks began at 7 a.m., and Blastic expects they’ll be out there into the late afternoon. According to him, members of the Orlando Democratic Socialists of American and the Democratic Progressive Caucus have made it out to the picket line in solidarity.

New Congressman Maxwell Frost — who made it out to the store during their organizing campaign to show support — was also contacted about the action.Orlando Weekly texted Frost to confirm whether or not he’d be attending Saturday, but he did not respond to our request for comment in time for publication.

Blastic said that workers out on strike today at his Starbucks location in Oviedo want the credit-card tipping option that non-union stores have been guaranteed to be put back in place at his store.

They’re also hoping for Starbucks to come to the bargaining table with them to negotiate a collective bargaining agreement — aka, a union contract — to address issues such as scheduling.

In a statement to the Associated Press about the national strike action, the company said, “We remain focused on working together and engaging meaningfully and directly with the union to make Starbucks a company that works for everyone, and we urge Workers United to uphold their promises to partners by moving the bargaining process forward.”