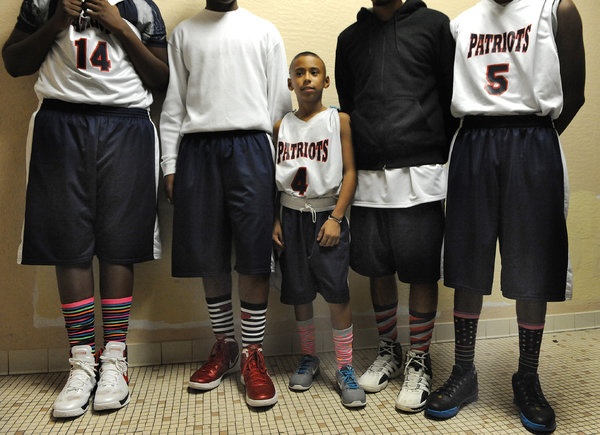 Image from the New York Times

It's not every day that a private high school varsity team drafts an 11-year-old middle schooler, but 4-foot-5-inch Julian Newman is so determined to excel at basketball that he has become not only a viable teammate for the Downey Christian School varsity basketball team but an esteemed team leader. And it's not just his teammates who have noticed. The Orlando Magic invited Newman to perform his basketball stunts as a half-time show. Inside Edition put him on TV. The New York Times stuck his story on the front page of their Sports section. We all get it: he's short, he's young, and he's a serious baller. That's the stuff that kids dream of, but what seems to have gotten Newman to the skill level he's reached has been his single-minded attention to improving at this sport.

Being studious is important in any sport, but not every athlete emphasizes this because it's more fun to talk about the physicality of the sport than the head game. One of the main reasons I will defend LeBron James to the death against any of his detractors is because if those haters would just let James talk, he would share his vast understanding of hoops, which he has ingrained after obviously obsessive research. And from what I gleaned from the NYT piece, Newman has that same insatiable need to learn what others are doing, so he can do it, too. Imitation makes perfect? That famous Gatorade commercial with the nasally hook, "I wanna be like Mike," depicts a fantasy, but it's hard not to respect a talented kid who is earnestly working toward it. According to the Times, "Julian sinks 100 free throws, 200 floaters and 200 jump shots every day." This guy goes to sleep in what sounds like a ball pit filled with the discarded orange balls that he's worn to brown after employing each for just two weeks.

For now, Newman plays point guard at Downey Christian School, where his father is the coach. Despite what you may think, though, his parents describe him as a self-motivated player, and the reason his father pitched his son regulation-sized basketballs - even when he was a small child - was because Newman insisted. Although he's only 11, and has much room to grow, it would seem right now he is positioned to be more like the NBA's next Nate Robinson, the 5' 9" point guard who memorably rocked the All Star dunk competition on three separate occasions. But wherever his attention takes this young star: coaching, scouting, playing, I dunno, blogging, it's clear his read on the sport is exceedingly well-versed.