Letters to a Satanist: Why does the Satanic Temple object to having 'In God We Trust' displayed in public buildings? 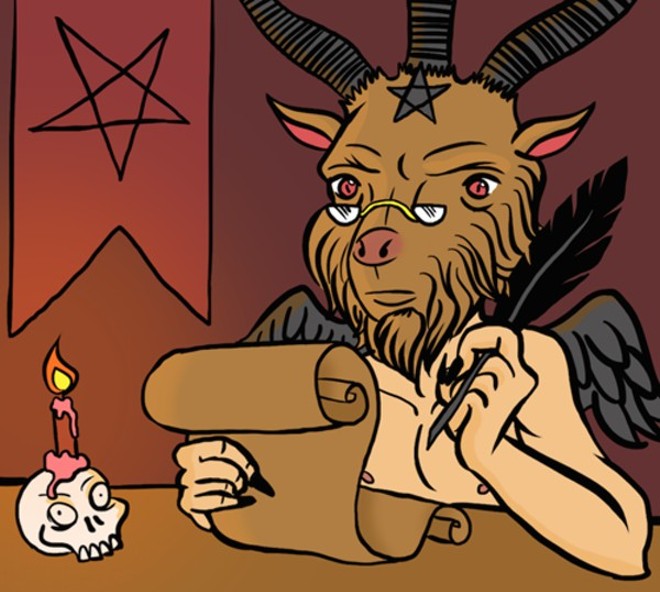 Lee DeVito
"In God We Trust" isn’t exclusive to a single religious view. Most religions center upon God worship. Why does The Satanic Temple object to "In God We Trust" being displayed in public buildings?

This past month, Clark County, Washington, stirred controversy when, despite significant resistance, officials voted to allow a plaque engraved with “In God We Trust” to be displayed prominently in the council’s chambers. This move was apparently prompted by the urgings of an organization known as “In God We Trust, America, Inc.” (IGWT), based out of Washington, DC. IGWT is zealously engaged in a national campaign to urge malleable and credulous public officials to allow divisive proselytization on public grounds to appease conspiracist fears of a non-existent plot against a “Christian Nation” that never was.

Councilor Tom Mielke proved both malleable and credulous enough to vociferously advocate for the IGWT plaque in Clark County, hopefully calling into general inquiry his very competence as a public official. To be sure, the growing prevalence of public officials doggedly dedicated to pandering to their own tribal affiliations and superstitions at the expense of taxpayer dollars – creating animosity in their mixed communities – is a national outrage.

The idea that “In God We Trust” isn’t meant to convey an exclusive religious message is insulting to the intellect. Surely, Mielke and the crusading IGWT zealots wouldn’t be eager to display in “In Allah We Trust,” though they might disingenuously argue that Allah is but another name for the same heavenly tyrant. Also, it shows an incomprehensible amount of ignorance to completely disregard the presence of non-believers, polytheists, and others who can’t possibly imagine the IGWT plaque to represent their religious opinions in any way.

Fortunately, the Seattle chapter of The Satanic Temple, headed by one Lilith Starr, took note of the general discontent Mielke’s disgraceful idiocy has engendered, and is offering an alternative, or complementary, plaque that better reflects our American secular constitutional values of plurality and legal equality. The proposed plaque displays a border of symbols representing a diversity of religious views, centered with the phrase “E Pluribus Unum,” followed by its translation, “from the many, one”.

If the IGWT plaque is truly believed, by those who endorse it, to reflect a broad range of religious opinions, surely nobody will object to more appropriate display of inclusion.