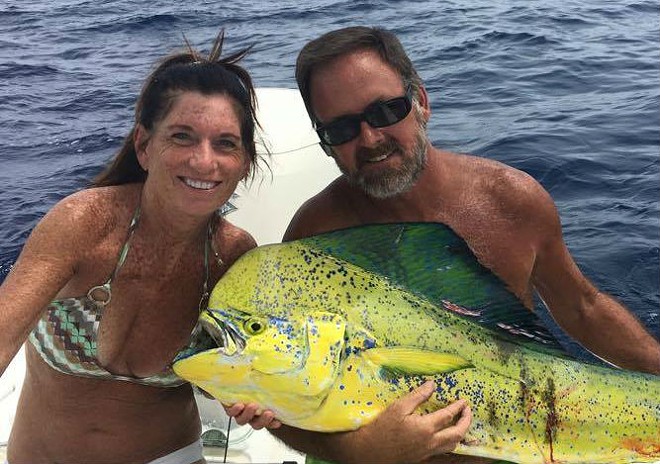 Photo via Michelle Mishcon Stevens' Facebook
Michelle Mishcon and her husband John Stevens
Martin County deputies found a grisly scene in the driveway of a Tequesta home on Monday when they spotted 19-year-old Austin Harrouff hunched over the body of a bleeding man, ripping pieces of the man's face off with his teeth.

The Miami Herald reports deputies tried unsuccessfully to use stun guns and a police dog to pull Harrouff, a student at Florida State University, off the body of John Stevens III. Ultimately, a group of officers was able to yank the abnormally strong Harrouff away while he grunted, growled and made "animal noises."

Martin County Sheriff William Snyder tells reporters that inside the garage, deputies found Michelle Mishcon Stevens, who was stabbed to death. Snyder says there was "an enormous amount of violence" in the garage, where it appeared the husband tried to fight off Harrouff, the Herald reports.

The suspect did not know the couple, and Snyder calls the attack "completely unprovoked and random," according to the Herald. Officials suspect Harrouff may have been under the influence of hallucinogens. A neighbor who tried to help was also stabbed and later taken to the hospital.

The Herald says Harrouff was at a local sports pub with his parents when he got angry and stormed out. He was in Tequesta visiting his hometown with some of his fraternity brothers. The Palm Beach Post reports the suspect is currently under sedation at a Palm Beach County hospital.