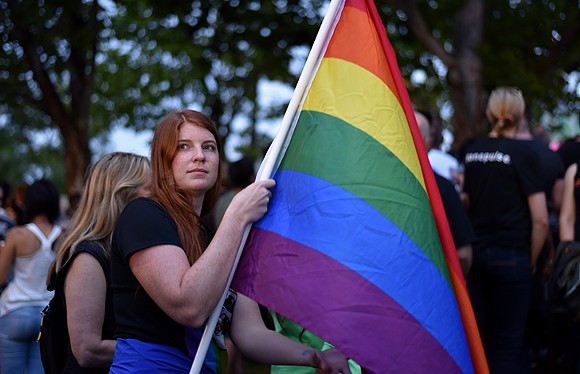 Photo by Monivette Cordeiro
Hours after being sworn in on Tuesday, Florida Gov. Ron DeSantis signed an anti-discrimination order for state employees that excluded protections for LGBTQ people.

The Republican governor signed the "Reaffirming Commitment to Diversity in Government" order, which pledges that his administration will prohibit discrimination in employment based on "age, sex, race, color, religion, national origin, marital status or disability" for government employees and contractors. The order, though, does not include "sexual orientation" or "gender identity" among the listed protections.

"Equality Florida is deeply disappointed to see that LGBTQ employees and contractors have been left out of the Governor’s executive order," said Joe Saunders, senior political director for the state's leading LGBTQ rights group. "It’s hard to believe that Gov. DeSantis and his staff are not aware of the LGBTQ communities call for these protections following the Pulse tragedy and therefore it is hard to interpret this as anything less than a purposeful omission."

Since the 2016 massacre at the gay nightclub Pulse, LGBTQ advocates from across the state pleaded with Republican Gov. Rick Scott to sign an executive order protecting state employees against discrimination based on sexual orientation or gender identity. Florida civil rights laws don't explicitly protect queer and trans communities from discrimination, meaning it's legal to deny LGBTQ people housing, service and employment.

Scott promised advocates after Pulse that he would take action and sign the order, according to Equality Florida leaders.

But Scott never signed the order. Advocates accused Scott of leading them on for two years and breaking his promise to the LGBTQ community. Scott's office insisted that anti-discrimination protections for LGBTQ people already existed on the federal level, despite the Trump administration's continuous efforts to roll back these civil rights, particularly for transgender and gender non-conforming people.

Orlando Weekly reached out to DeSantis' office for comment but did not receive an immediate response.

The order signed by DeSantis on Tuesday further specifies that it will be the policy of his administration to "ensure equal opportunity for all individuals currently in, and individuals seeking employment in my administration."

"It has been, and shall continue to be, the policy of my administration to seek out for hiring, retention and promotion, the highest quality candidates for my administration regardless of age, sex, color, religion, national origin, marital status or disability," the order said.

Equality Florida said it has called for a meeting with DeSantis to discuss the order.

"We look forward to a dialogue with Governor DeSantis about why LGBTQ employees have been omitted from this critical policy and how he plans to make sure that all Floridians, regardless of who they are or who they love, can be protected from discrimination," Saunders said.

UPDATE: State Rep. Carlos Guillermo Smith, D-Orlando, said on Twitter that he met with Gov. DeSantis' policy team within 24 hours of issuing the executive order that did not include LGBTQ protections for state workers. Smith is Florida's first openly gay Latinx lawmaker.

I met with Governor @RonDeSantisFL entire legislative/policy team in my office within 24 hours of them issuing their “diversity” EO. We are working together in good faith while they reassess their options.... (1/2)https://t.co/lHMMdQaY4B

The @RonDeSantisFL team didn’t have to meet with me, but they did so and quickly! Hoping for a miracle if it means helping my LGBTQ siblings. Maybe he’ll be different than @ScottforFlorida? 🙏🏳️‍🌈 (2/2)