And don't let the door hit you where the good Lord split you. 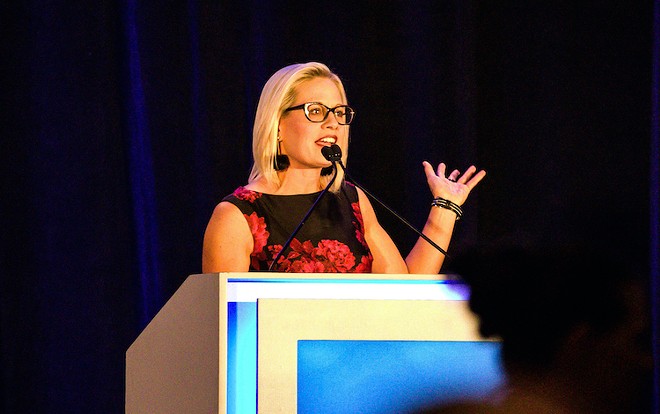 Photo by David Herring
Lobbyist-in-waiting Kyrsten Sinema’s only North Star is her own ambition.

Arizona’s most prominent narcissist — having been booted offstage Tuesday when Senate Democrats secured their 51st vote, depriving her of a veto and thus the spotlight she so obviously, desperately craves — announced on Friday that she was leaving the Democratic Party to become an independent.

Sinema didn’t say she’ll continue to caucus with Democrats. But she said she expects to keep her committee assignments, which won’t happen if she throws in with the GOP. So the Democrats’ majority should remain, allowing President Biden to power through his judicial nominations for the next two years.

Nothing immediately changes, but Sinema gets to bask in another round of media attention — and Democrats get another 2024 headache to deal with.

“I know some people might be a little bit surprised by this, but actually, I think it makes a lot of sense,” Sinema told CNN.

No one was surprised, Kyrsten.

You needn’t be a political savant to see through the bullshit. Sinema, a former Green Party activist who spent the last two years sabotaging Democrats, won her seat in 2018, the best Democratic year in over a decade. To preserve her political ambitions, she modeled herself after the “maverick” John McCain, minus anything resembling a principle beyond naked self-interest.

Two years later — in a more challenging Democratic environment — Arizona voters also elected Mark Kelly to the Senate. Like Sinema, Kelly campaigned on promises to be independent and bipartisan. Unlike Sinema, he had to run again in 2022 to claim a full term, in a year everyone expected to be a red wave.

Yet Kelly didn’t vaingloriously knife his party in the back. And in November, he won re-election by five points — practically a blowout in a state that had been deeply red for a generation.

Sinema knows she can’t replicate his feat. She couldn’t survive a Democratic primary against U.S. Rep. Ruben Gallego. So if she runs for re-election in 2024, she’ll do so as an independent. She won’t win. Nobody likes her: Only 37% of likely Democratic voters approved of her as of September; 36% of Republicans did. As the election nears, both numbers will plummet.

The only question is whether Sinema will forgo spoiling Gallego’s campaign before taking a plum gig shilling for Big Pharma.

Given the Paul Gosar-fication of the Arizona GOP, that’s unsettling. Kelly’s victory this year, of course, was as much a testament to Arizona Republicans boarding the crazy train as his skill as a candidate. Up and down the ballot, the party failed to offer its best and brightest, and Blake Masters was the icing on the cake. If the current trajectory continues, one can only guess what asylum they’ll pluck the next GOP nominee from.

Then again, this is a microcosm of the national Republican Party’s existential crisis. This candidate-quality problem greased the wheels of Sen. Raphael Warnock’s re-election over Herschel Walker in Georgia, which ensured the Democrats’ majority and plagued Republicans in Pennsylvania, Nevada, and New Hampshire (and in Ohio, though J.D. Vance won).

Florida Sen. Rick Scott — who, and this can’t be repeated often enough, oversaw one of the largest Medicare fraud schemes in American history — defended his abysmal performance as head of the National Republican Senatorial Committee. He insisted that “we had good, quality candidates,” while admitting, “All of this has been pretty disappointing.”

That Rick Scott believes Herschel Walker and Blake Masters and Mehmet Oz were “quality candidates” says much more about him than it does about them.

This is the same reason Republicans have only a nine-seat majority in the House instead of the expected 30- or 40-seat margin. All over the country, Democrats won districts they had no business winning in a midterm — and if the Democratic parties in New York and Florida weren’t such colossal shit shows, Nancy Pelosi would have ended her career with the speaker’s gavel.

For even this radical court, that seemed like too big a bite. But who knows? In practical terms, it doesn’t matter for North Carolina. Republicans won a majority on the state’s supreme court in November, so the legislature will re-gerrymander congressional districts for their affirmation — and this time, maybe they’ll be idiot-proof.

This context is important for the inevitable both-sidesing of Sinema’s announcement, which, it’s no coincidence, she made on Friday, timed for the Sunday morning circuit. Republicans and the media’s professional centrists will frame this as a Democrat leaving the “far left” for the “middle.”

The reality is much simpler: As one of 51 Democrats, Sinema was a backbencher about to lose her primary. As an independent, she can still preen for the cameras and collect fat checks from corporate PACs. Either way, her Senate shelf life expires on Jan. 3, 2025.