While arson investigation continues, Orlando's Beefy King will soon be back open 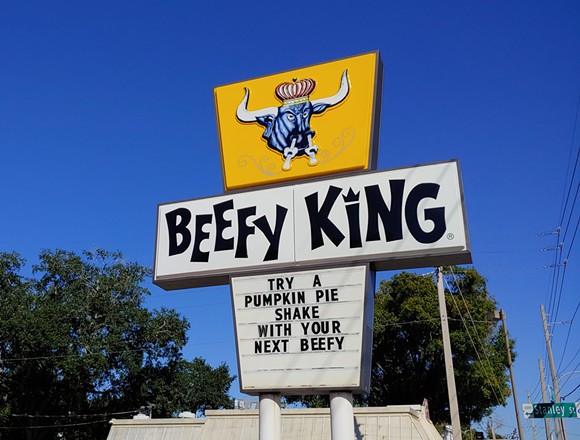 Thankfully, the alleged arson that took place at Beefy King only momentarily closed the cherished Orlando sandwich shop. On Monday, the restaurant's Twitter page announced that the Beefy King will reopen Wednesday.

On Nov. 12 via Instagram, the half-century-old eatery informed its loyal eaters that a fire broke out on the Bumby Avenue building. Beefy King noted that no one was hurt and that minimal damage was done, but added that they couldn't open until repairs were made.

A man living near the restaurant made the 911 call a little before 2 a.m. on Nov. 12, reporting the fire and telling the operator that he thought it looked like it was coming from the inside.


UPDATE: WEDNESDAY will be the day! There is still quite a bit to finish and our inventory was completely wiped out. :( In order to properly restock we will need to push opening to Wednesday. Thanks for understanding

Orlando Fire Department arson investigators and Orlando Police found evidence suggesting that the fire came from the outside, suggesting it was arson. Video footage form a security camera led police to a suspect, John Huff, who was arrested and taken to Orange County Jail.

In today's Twitter post, Beefy King set a return date, putting an end to the company's first or deal with a fire behind it, but not before taking time to replenish its inventory.

UPDATE!! New ceiling lookin fresh! We will open WEDNESDAY 11/20! There is still quite a bit to finish and our inventory was completely disposed of, sadly. In order to properly restock we will need to push opening to Wednesday. Thank you for understanding. BMS CAT has done amazing meeting deadlines in record speed! @wesh2 @fox35orlando @news6wkmg @news9 @orlandosentinel @orlandoweekly @orlandobungalower @themilkdistrict

"Our inventory was completely wiped out," said the Beefy King post, the sentence punctuated with a sad-face.

After fully restocking, the Beefy King will be back ruling over tasty bites Wednesday.