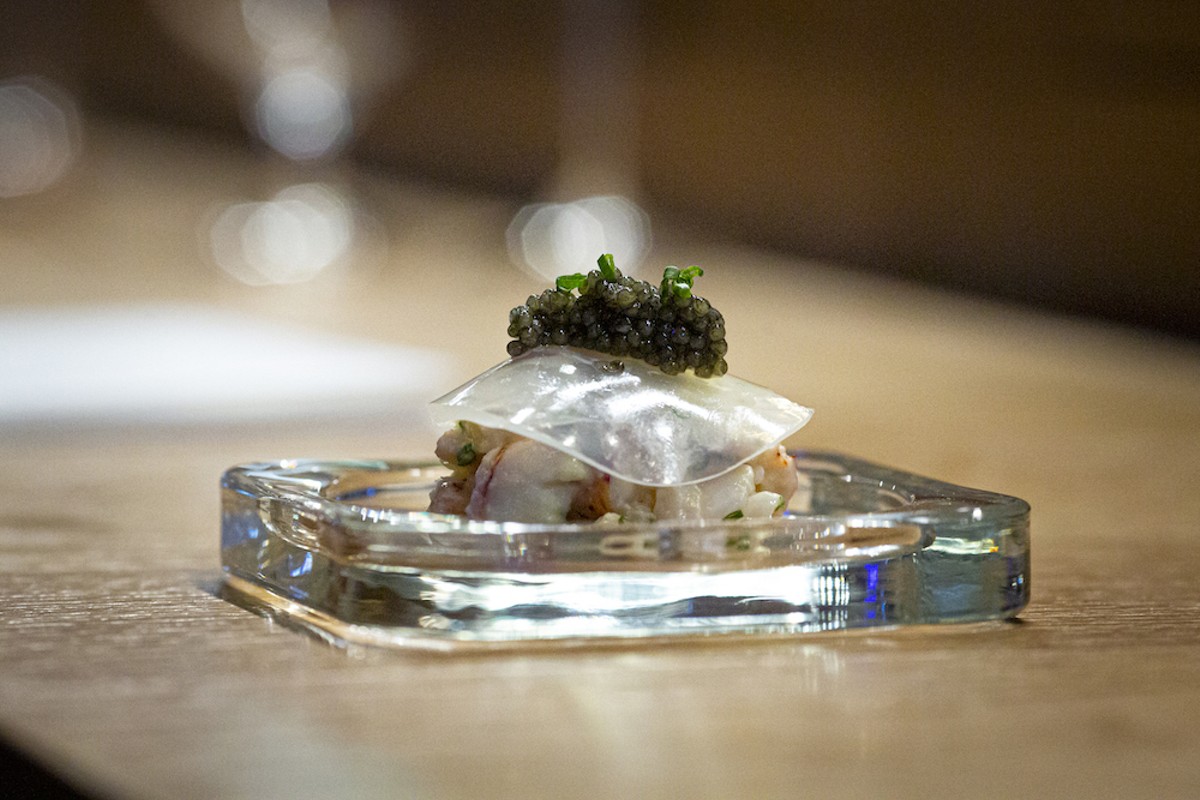 The popularity of tasting and dégustation menus has led to a new type of restaurant — the kind with just a handful of seats and a counter behind which chefs showcase their creativity through a multicourse offering of tweezered fare employing high-end ingredients, all for a cost equivalent to a month's rent (depending on where you rent, of course).

Guests are made to feel like they're being treated to a singular dining experience, one that'll gratify, edify and raise their food IQ. Chefs get to play with rarefied ingredients and interact with guests on an intimate level while expounding on their cooking philosophies and techniques. Sommeliers and beverage directors pair and pour with great abandon as chefs go over the most miniscule details of every dish: "There's a tamarind gel inside the shell of the Norwegian king crab, along with some fresh asparagus and crème fraîche. On top are bacon-fat lace tuiles and Kaluga caviar. It's being served with a rich and unctuous Junmai Daiginjo from Niigata Prefecture."

Fancy, right? That's precisely why some folks don't care for such experiences. They can seem like pretentious, unapproachable, posh-over-portion affairs not worth the price of admission.

Personally, I enjoy them. They've afforded me with some memorable meals (like the crab described above), and Soseki — a 10-seat "modern omakase" from Mike Collantes (Taglish, Perla's Pizza) — is no different. Denni Cha, Collantes' partner in the venture, left within weeks of opening for personal reasons, but talented journeyman chef Tadateru "CJ" Tokudaiji came on as chef de cuisine. Along with sous-chef Kevin Abanilla, the trio present elevated 15-course ($150) and 20-course ($185) meals. Benjamin Coutts oversees beverage pairings ($75), and an assistant helps keep things flowing.

This past spring, my meal commenced with a couple of melony oysters supplied by Sublime Oyster in Panacea, Florida. One was garnished with a granita of pink Campari; the other, with green mojito. Both couldn't have made for a more refreshing start. Dry ice inside the dish created a showy fog effect that intensified after a tableside water pour. For all the aperitif's pomp, the sushi "act" that followed was a simple presentation of medai with kumquat, and marinated yellowfin tuna zuke with black sesame. Three other such "acts" followed through the course of the evening, from 25-day aged chutoro topped with Kaluga caviar to applewood-smoked kohada (gizzard shad) cured in salt and vinegar.

Creativity, an essential component of today's omakase houses, was on full display here. The sinfonía de tomate conducted by chef CJ was an Alinea-inspired composition of four movements: 1) Eat the lemon verbena-compressed cherry tomato graced with gossamer tomato seed "glass" (it's made using kuzu starch); 2) dip the noodles of cucumber and julienned myoga (Japanese ginger) into the gazpacho broth and slurp them; 3) stir the spoon holding a foamy tomato water "cloud" with micro basil and dehydrated tomato skin into the leftover gazpacho broth; and 4) drink the broth like a soba-ya.

There was enough artistry in the "fish and chips" to give a Brit a case of the collywobbles. Sorry, ol' chap, but no malt vinegar or tartar sauce comes with this serving of cubed kampachi draped with wisps of sunchoke chips, pickled berries and fennel pollen. The most stunning dish of all, and easily one of the prettiest things I've ever been served, was a bowl of wood ear fungi topped with a soy-marinated egg garnished with scallion slivers and sujiko (salmon roe). But it was the vertically positioned rice crackers that lent a dramatic and ethereal effect. If you ask me, the dish is worthy of being offered at Kusabira Jinja, the Shinto shrine to mushrooms near Kusatsu, Japan.

But not everything here is so gravely serious. In fact, Collantes quite enjoys hamming it up and cracking a corny joke or two with the gathered. The trio get playful in an edible homage to Katz's Deli with a pastrami-cured foie torchon on burnt milk bread with radish, avocado and crispy fried shallots. "It's a dish we researched and couldn't find anywhere else, so we did it," says Collantes. Evidently, CJ's secret foie gras cure has more than 10 different ingredients and spices.

"I want to give diners more than just good food," says CJ. "Just good food is boring. I want to give them an experience and present food in a unique way." He sure as hell does that with a spectacular plating of curly kale in the duck dish. It looked like a portal beckoning us into some sinister dimension, but it was just dehydrated kale sitting atop pear chutney. There wasn't a single person who didn't ooh or ahh after catching sight of it.

And the spectacle continued through to dessert with the "mat-cho," a stunning closer resembling a bird's nest. Milk chocolate ganache, burnt marshmallow and frozen matcha sponge cake formed the base of the nest, with the "twigs" fashioned from dark chocolate. Toasted almonds and viola petals completed the multilayering effect. The twigs, says chef CJ, were inspired by the Anping Tree House in Taiwan and the trees at Angkor Wat. (If you're not familiar, they kinda looked like Groot.)

BTW: Utensils for each guest are kept inside a not-so-secret "secret drawer," which I really liked. It helped maintain that tidy aesthetic. What I didn't care for was the stage lighting — Insta-friendly, yes, but a bit too harsh and intrusive in this cozy space. The acoustics seemed a bit off, too. My dining comrade remarked that, at times, it was hard to hear details of a dish and its respective pairing which, it should be noted, were expertly curated. Even the music was inconsistent in volume — but these are all elements that can be easily rectified. Hell, I can tell you that about five courses in, most people were fuller, a little drunker and a whole lot happier than when they first entered. It's a global culinary experience they craved, and warming up to it was a given. 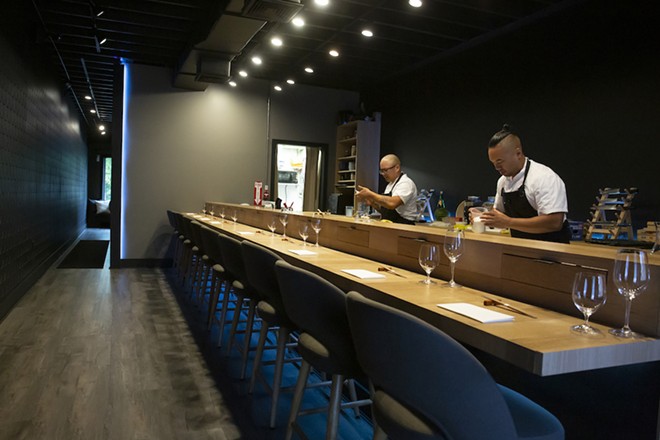