One Disney World restaurant might be getting an 'incredible' update

Image via Disney
Disney’s nonstop pursuit to fill every square inch of Walt Disney World with film franchises is now rumored to be heading to the Contemporary Resort. According to WDW News Today, a site with a mixed track record regarding Disney rumors but one with some impressive accurate scoops as of late, is reporting The Wave restaurant at the Contemporary will soon undergo a full transformation into an Incredibles-themed steakhouse sometime within the next year.

While the location might seem odd at first, the push to add intellectual properties to every experience at the resort has resulted in far more questionable additions in recent years, including a Beauty and the Beast bar under construction at the Grand Floridian (despite a French-themed resort also currently under construction near Epcot), a Snow White-themed dining experience at the American Northwest Wilderness Lodge, and, of course, Guardians of the Galaxy in Epcot’s Future World. The Incredibles' aesthetic is also more in line with that of the Contemporary than the Western Woody's Roundup that will take place at the resort this July. 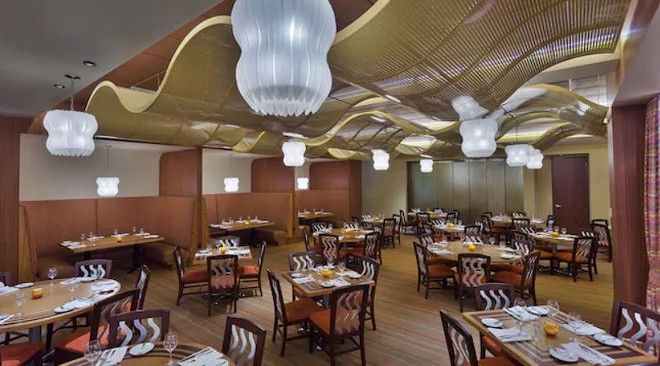 Image via Disney
The new steakhouse rumor comes just The Wave celebrates its 11th anniversary this month. The menu has been slightly updated since the June 7, 2008, grand opening, but overall, the American-focused menu has remained mostly the same, as has the decor. The restaurant is accessed via a tunnel-like hallway just off of the hotel’s check-in lobby. Inside a circular check-in lounge would be the perfect area for a character photo-op, though it’s unclear how much remodeling if any, the rumored Incredibles update would entail.

Image via Disney
Incredibles 2 is the 16th highest grossing film of all time with a worldwide box office take of $1.242 billion, only $34 million less than Frozen. The long-anticipated sequel to the 2004 film was a smash hit and Disney was quick to cash in on it. Disney opened an Incredibles-themed overlay to a roller coaster at Disney California Adventure a week after the sequel's opening, with a similar update rumored for Rock ‘n’ Roller Coaster at Hollywood Studios. Last summer also saw an Incredibles experience in the Magic Kingdom’s Tomorrowland. A similar temporary experience opened earlier this year Hollywood Studios. There guests can meet Edna Mode, buy food and merch themed to the Incredibles, and participate in a dance party with Mr. Incredible, Mrs. Incredible and Frozone. That Incredibles experience will remain until the end of September.

With the quick turnaround, if the rumored Incredibles steakhouse does happen, it will likely be similar to the Story Book Dining at Artist Point with Snow White where much of the previous decor and menu remained with only minor tweaks.

As of now, the Wave is still taking reservations through the end of November with no mention of any updates.