On this less glamorous, half-forgotten strip of Winter Park, Kombu Sushi Ramen maintains a fittingly low profile. The restaurant sits in a small-boned, blue-and-white building, one that's seen its fair share of turnover. It's housed everything from Donatello's Trattoria and Alfonzo's Fine Italian to New Orleans Cajun Seafood and, most recently, Bigbelly's Hawaiian Grindz. But judging from Kombu's popularity, it appears as though the sushi/ramen concept may have some staying power in the Goldenrod neighborhood.

Granted, it is a relatively small space — conventionally modern, predictably simple — so it tends to fill up quickly, on weekends especially. Glance over at the sushi bar and you'll see a lone chef working like mad to get all the orders out. I couldn't help but feel sorry for the guy — clearly he needs a bit of assistance. The hamachi nigiri ($5.50) and a spicy tuna battleship roll (aka gunkan maki, $6) were both hastily put together and, more importantly, the sushi rice lacked that subtle, and crucial, vinegary tang. Same went for the rice in the donburi with short ribs ($15.95). When compared to the donburi served at, say, Sushi Kichi — well, there just isn't any comparison. I will say the rice bowl looked very photo-worthy with those thick, sesame-flecked, scallion-sprinkled slabs of short rib. The ribs certainly didn't lack in flavor, but they were a lot more fatty than fall-off-the-bone. 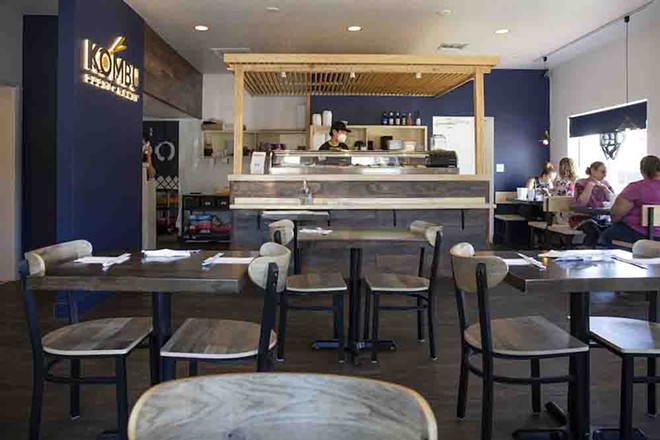 Now, on to the tale of two servers. One, with an agreeable disposition, suggested I order the mayu tonkotsu ramen ($13.50) with a pork broth flavored with fried garlic and black garlic oil. I said I'd consider it after eating the donburi. Given how unfulfilling that rice bowl was, I figured I'd go for the ramen. Enter server No. 2, a surly sort who presented me with the check. When I said I wanted to order some ramen, I was met with, "You know it's going to take 15 to 20 minutes, right?" For a moment I thought, well, maybe I should just leave, but I was still hungry so I countered with, "That's fine." The surly demeanor quickly turned to one of annoyance. "Oh, and if I could get a refill on my green tea, I'd appreciate it." I could almost hear the "grrrrrr" as Angry Pants stomped off. It was comical, this attitude, and I couldn't help but chuckle at it all.

The ramen, however, was no laughing matter. Again, it looked great, but the broth lacked a depth of flavor. To me, it didn't seem that pork bones were being boiled down for a day or two to make the broth. When I inquired about it, the server (the nicer one) had absolutely no clue. I'm checking their Instagram account as I write this and I see a video posted from February showing a 12-hour tonkotsu broth, so there's that. But the noodles, limp and overdone, left much to be desired. They curtailed any gusto we had for the shoyu ramen ($12) as well.

Here's the thing: Kombu likely won't be mentioned among the city's elite sushi, ramen or donburi spots but, right now, that doesn't appear to be their primary motivation. What they are doing is exposing a neglected sector of the city to a sort of cuisine that clearly resonates with its food-conscious residents. And, as those residents demand more, there's no reason why the restaurant can't respond in kind. After all, it's the formula for a winning Kombu.