A palette for the palate

Throughout the course of 1921 Mount Dora's five-year evolution, one constant has remained — an earnest dedication to showcasing Florida ingredients. From the Floribbean fare conceived by Norman Van Aken and Camilo Velasco to the modern comfort food of Josh Oakley to the progressive artistry of current executive chef Chris Edwards, the focus has always been on the bounty of the Sunshine State. But this 1921 — version 3.0 — feels like its most fully realized iteration, and the team led by Edwards has a lot to do with that. The former Atlanta fixture did stints at renowned institutions Holeman & Finch, Restaurant Eugene, and King + Duke before manning the kitchen at the most fetching restaurant in Central Florida. In fact, little (if anything) has changed with the mid-mod interior since the restaurant opened in late 2016, and that's a good thing. I mean, why mess with the sittable art by Wharton Esherick, Wendell Castle and George Nakashima, or the decor and paintings that make 1921's aesthetic an instant classic? 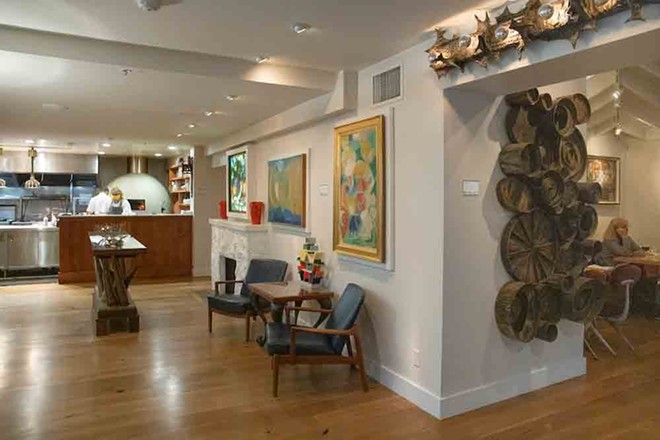 photo by Rob Bartlett
A view into the kitchen at 1921

No need, I say, and no need to mess with pastry chef Tiffany Watson's yeast rolls either. The throwback nod to midcentury dining is an instant classic itself, brushed with house-made cultured butter and flecked with Maldon sea salt. But in dishes crafted by Edwards and his trusted sous-chef Jose Fabre, the pair play with modernist forms of expression.

It's like we just ate a Miro, I think to myself after ravaging an organic-abstract serving of tomato spheres dancing around a blob of buffalo milk burrata ($19). They're connected by orange streaks of tomato honey that run through quenelles of earthy-fresh basil pesto. Wispy watercress imparts an ethereal quality to it all, which I'm sure is a metaphor for something. It's served with slices of dense rosemary focaccia that look more like pound cake but, hey, I'm no art critic. There's artistry in the seared diver scallops ($38) as well, arranged to look like some sort of Fauvist wreath with bright textural embellishments — golden raisins, cheddar cauliflower, ricotta gnudi, fennel strands, tiny shrimp. Pooled in the center is a curried brown butter–and–cheddar cauli sauce. It may sound like a lot, but the dish didn't feel adulterated. 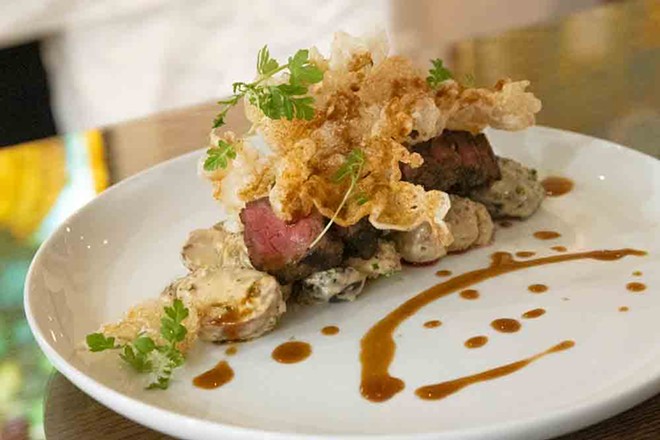 It's the same with the golden tilefish ($36). You'd think serving it with popcorn polenta, Mexican chorizo and saffron cream, then adding the crunch of yellow squash Parisienne, would hide the fish, but no. Edwards and his team are skilled in the, umm, art of proportion. We see it in a precise stacking of forbidden rice, bok choy and grilled chicken breast basted with a peanut bulgogi. Sounds somewhat straightforward, but that glaze was something. Peanuts are toasted in the wood oven, then a jus from chicken backs and a bulgogi marinade is made, before it's all brushed onto that perfect oak wood-fired breast. Indeed, they're masters at the art of cooking over a wood fire as well. If it weren't clear to us before, it is after a serving of roasted Blue Point oysters ($6) enriched with bone marrow, foie and carrot butter. They're served in a rock-salted roasting pan, with cardamom and cloves lending a warming-spice aroma.

The dusting of nutritional yeast on duck-fat chicken thigh croquettes ($14) adds a uniquely cheesy note to the meaty nuggets, which sit in a shallow pool of sorghum hot sauce crumbled with bits of Asher blue cheese. Coffee-rubbed venison ($35), another oak-flamed wonder, is served with some highly intriguing accompaniments: rutabaga tater tots, strawberry-pecan sofrito, a creamy puree of salt-roasted pecans and "French press" beets and strawberries — French press coffee from 1921's house roast is made into a coffee cream, which is then reduced and used to glaze poached beets and strawberries in the wood oven until they're hot, then they're mounted with cold Plugra butter for added luxe and sheen. That's dedication. It's also a bit nuts. The venison, arguably our favorite dish of the night, also comes garnished with shaved raw beets and fresh berries dressed in olive oil from Georgia.

No doubt 1921 is an epicure's delight — I haven't even touched on the exemplary cocktail program offering the mellowest Negroni (it's solera-aged in a barrel), or the 450-plus-strong wine list overseen by general manager and wine director Adam Crane that's easily one of the best in the state. I will say that a bottle of 2013 Hirsch Vineyards "San Andreas Fault" pinot noir was our quaff of choice. Its strawberry notes buoyed every bite of the triple chocolate ganache ($11) with Chantilly cream, as well as the tetsukabuto squash crème brûlée with oat streusel ($10). If you're feeling particularly decadent, the rosemary-basted foie gras ($27) appetizer, served over griddled brioche with pecan butter and red wine grape jam, is another feat in aesthetics and indulgence. Yes, it was a starter, but we were OK with that. None of us were ready for an ending to this meal.