TALIB KWELI Though G-Unit sneakers and 50 Cent vitamin water have their place, we feel that there's something a little more … authentic about the hip-hop coming through town on the "Breed Love Odyssey" tour. The Talib Kweli/Mos Def Black Star album still makes it into regular rotation here, and masterful MC Talib Kweli stings again with this month's Right About Now mix tape, which features eloquent tour guest Jean Grae. Ever since Jean Grae suggested that she'd "get her ass kicked and talk shit while it's happenin'" on Mr. Len's solo debut some five years ago, she's dealt gold. From the battle-ax-edged verse that lined her Bootleg of the Bootleg EP to the buttery, soul-laced This Week to the hypnotic contributions to this year's Herbaliser joint – what's not to love? (with Jean Grae, Pharoahe Monch; 8 p.m. at House of Blues; $17.50-$40; 407-934-2583)

INTERFAITH FEEDING THE ELDERLY PROGRAM It's worth pointing out that, never mind the quagmire of communication problems in our national government, there are still positive alliances forming every day that make our world a better place. Take, for instance, the fact that Seniors First Inc. has partnered up with three churches (Redeemer Lutheran Church, St. Peter and Paul Catholic Church and First Baptist of Orlando) to make sure that its Meals on Wheels clients are served something special on Turkey Day. Volunteers are always needed throughout the holiday season for such initiatives – just contact the organizers. (Seniors First Inc., 407-292-0177; Orlando Union Rescue Mission, 407-422-4855; Hands On Orlando, 407-740-8652; Joy Metropolitan Community Church, 407-894-1081; Salvation Army Orlando, 407-423-8581, ext. 215)

BAUHAUS Sometime around 1978, while walking across the misty moors one night, English lads Peter Murphy, Daniel Ash, David J. and Kevin Haskins were set upon by a ravenous yet music-savvy vampire (no truth to the rumors it was just David Bowie rehearsing for his upcoming role in The Hunger). Shortly thereafter, the newly undead foursome dubbed itself Bauhaus, Bram Stoker-ized its glammy post-punk and set out to entertain its gloomy, caped, absinthe-drinking ilk. And when you're doomed to walk the earth for several hundred years or so, hey, you might as well keep touring until the bitter end, right? All right, so maybe that's not exactly how the story goes, but the British gothfathers are back for their second proper reunion following a somewhat acrimonious 1983 split (Murphy subsequently did his own thing, while Ash, Haskins and David J. eventually formed Love and Rockets). We checked out one of the band's 1998 comeback shows in New York City, prepared for it to disappoint or just plain suck, but we were blown away by the quartet's chemistry, ferocity, relevance, theatrics and Murphy's still-spectacular voice. From all accounts, this year's go-round has been equally impressive, suggesting that, heaps of cash and stalled solo careers aside, Bauhaus is still doing it for love of the game – or at least to turn on some fresh blood … er, fans to its towering legacy. (7:30 p.m. at House of Blues; $36.50-$79; 407-934-2583) 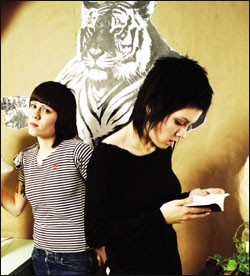 TEGAN & SARA We know what you're thinking: They're gay and Canadian … great. Actually neither of these contributes greatly to Tegan & Sara's sonic integrity; it's just that obnoxious music types like us feel the need to attack easy targets (especially the Canadian thing). Between their Lilith Fair/Ani DiFranco-ish beginnings and their present manicured power-pop delivery, the sisters Quin must be doing something right. After being discovered by Neil Young, they were handpicked to open for the likes of Chrissie Hynde, Ryan Adams and Rufus Wainwright. Their latest album, So Jealous, is a well-crafted, punky, poppy low-fi gem, produced in part by the New Pornographers' David Carswell, with musical contributions by Matt Sharp (Weezer, the Rentals). Even mainstream garage Goliaths the White Stripes covered T&S's "Walking With a Ghost" (and screwed it up). A T&S show should include folksy but gutsy acoustic duets, charged and catchy garage pop and, of course, their infamous onstage banter. Rumor has it these yummy twins can get a bit blue during their act. Behave, ladies – don't make us discipline you. (with Rachael Cantu, Vivek Shraya; 9 p.m. at The Social; $16-$18; 407-246-1419) 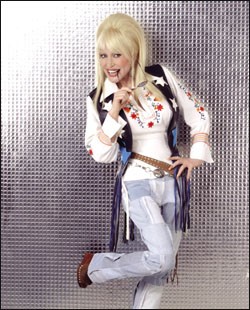 DOLLY PARTON Everybody's favorite flotation device – the one capable of telling stories about both possum stew and coats with too many colors – returns to one of her "business" homes this week, and we couldn't be happier. The Dixie Stampede is well into its nausea-inducing nativity situation at present, and there's just not enough Dolly to drown out all the Jesus going on around there. Thankfully, Dolly's still in her recent bluegrass phase and hawking a new album, Those Were the Days, that features such random classic choices as "Crimson and Clover," "Both Sides Now" and "Blowin' in the Wind." (Insert breast jokes here; apparently it's mandatory.) On the album, Norah Jones, Lee Ann Womack and Judy Collins are guesting along with numerous others, and Dolly still sounds as precious and pained as ever. It may take a lot of money to look that cheap, but it takes a talent larger than a fat horse's ass to sound that wonderful. Dolly Parton is impossible to criticize, so just lean in and worship. (7:30 p.m. at House of Blues; $50-$110; 407-934-2583)

ANDREAS TILLIANDER How music rooted in the joyous groovaliciousness that is house music has splintered and perversely developed into the racket purveyed by the likes of Andreas Tilliander is beyond us. How the twitchy, clicky tunes Tilliander creates manage to be as funky as they are weird is a mystery we'll never figure out. But it wouldn't be the first time we were confused about something, so that won't keep us from seeing this Swede dish out his luscious futurism in person. (with DJ Polygon Panties; 9 p.m. at The Peacock Room; $7; 407-228-0048)

THE VERONICAS We have a short attention span when it comes to gimmicky all-female pop outfits. We embraced T.A.T.U.'s rabid-chipmunk harmonies on their faux-lesbian debut, but shrugged when their latest release hit the shelves. We loved The Donnas when they wore name-emblazoned T-shirts and ripped off the Ramones, then we got bored with the act, only to tune back in when they outgrew the novelty shenanigans and developed real rock chops. For now, we're crushing on The Veronicas, 20-year-old ultra-cute Australian twins who merge the sounds of the aforementioned groups. Max Martin, the man behind pre-preggers Britney's "Baby" and Kelly Clarkson's "Since U Been Gone," wrote the hit-single hooks, and Jess and Lisa Origliasso capably navigate the boulevard-broad melodies. We'll deny digging this duo a couple years down the road; thankfully, the collective "we" makes it easy to dodge personal accountability. (with Ryan Cabrera, The Click Five; 6:30 p.m. at Hard Rock Live; $29.50-$32.50; 407-351-5483)

CHRISTMAS TREE PERMITS IN OCALA NATIONAL FOREST This long-standing tradition needs a PR revival. Once again, the public is invited to cut down a sand pine tree for holiday use (or whatever) in the woods of our favorite wacky national forest. Cost of tree: free. Cost of permit: $7. And they start selling permits on the first weekday AFTER Thanksgiving; thankfully, the good rangers aren't giving in to premature holiday excess. Permits can be purchased either in person or by sending a check or money order payable to "USDA Forest Service" to the address below. Along with the permit, you'll get a map to the "designated area" – they don't give you carte blanche throughout the acreage. Sand pines are not your typical Christmas tree, with asymmetrical branches, long green needles and heights of about 12 feet, but they're a native beauty nonetheless, and rather than destroying Mother Earth, choppers are helping to properly thin out the forested land. (permits sold 7:30 a.m.-4 p.m. Monday-Friday, Seminole Ranger District office, 40929 State Road 19, Umatilla, 32784; 352-625-2520)

CYNDI LAUPER Money doesn't really change everything. Cyndi Lauper, who's gotten both the short and long ends of the industry-acclaim stick over the past 25 years, seems to be riding high once again, vocally and physically in better form than ever. While her second dip back in the major-label pool, The Body Acoustic, may be a stripped-down repackaging of her catalog, it's still impressively vital, and anyone who's caught one of her appearances over the past few years knows that the live Cyndi is the only Cyndi. (You certainly know that you couldn't do this at 52.) Expect extended bits of banter between songs that maybe she doesn't mean to be funny, but, thanks to her "unusual" Long Island-ese, usually are. Also expect to cry during "True Colors," because if you don't, you're stupid and don't deserve to breathe. (with Jill Sobule; 7:30 p.m. at House of Blues; $25-$55; 407-934-2583)