Art at the speed of life 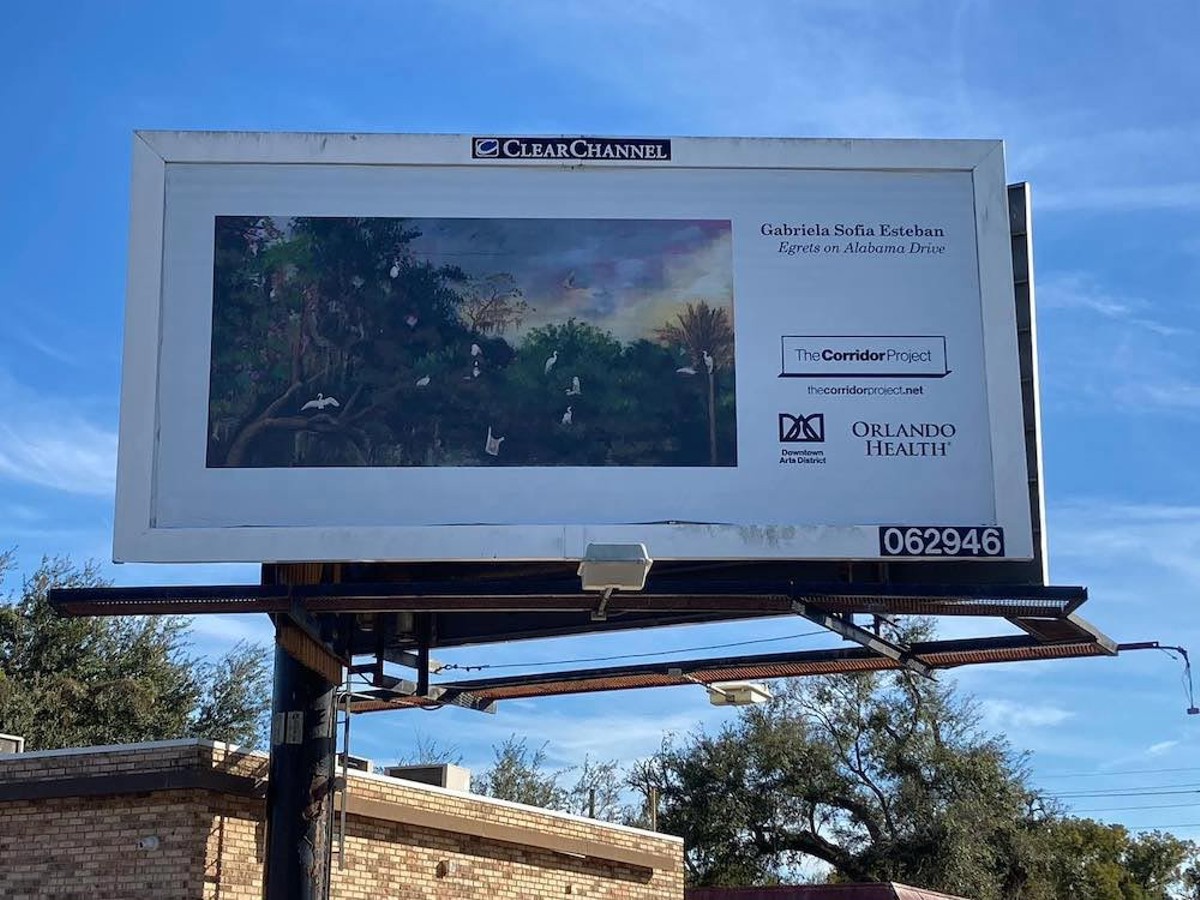 Art has no limits. Driving, however, does — generally somewhere around 55 or 35 miles per hour, in Orlando.

Municipal support of the arts (in the form of dollars, not vague approbation), also has its limits, but local curator Pat Greene isn't one to sit back and accept that. The Corridor Project Billboard Exhibition is an idea he's been thinking about for years, but it took some doing to get it — literally — off the ground.

"When I was in my early 20s, I was out of the country for over two years. When I returned, I really noticed how many billboards we have in this country," Greene says. "I was thinking it would be nice if some had art or something other than advertising. I thought it would be a great gallery."

The concept was concise, but far from simple. The biggest logistical challenge was connecting with a billboard company. He worked his way through a few points of contact before he was able to connect with someone who could help. "I went to my friends with the Downtown Arts District," Greene says. "[DAD executive director] Barbara Hartley had a connection with Clear Channel."

With the "gallery space" secured, Greene dug again through his prodigious address book to recruit the nucleus of artists whose work would be displayed. Eleven artists were pre-selected, with the remaining 19 artists chosen from more than 270 applications through an open call facilitated by DAD.

There's no overriding theme to the art being shown, aside from being work that can be appreciated even while viewers are whizzing past on I-4. (Though not all the billboards line the highway; many are located on side streets.) "I couldn't have too much nuanced art," Greene admits. "The billboard format is designed so that it should be more eye-popping than I might do in a conventional gallery."

Some artists submitted existing work, while others responded to the prompt. One Billboard Exhibition artist who understood the assignment, DNL HRS, says his piece is "a meditation on the car as a manifold symbolic object: On the one hand, a marvel of technological ingenuity, a source of entertainment ... on the other hand, a symbol of urban sprawl and ... impending climatological disaster."

Harris tells Orlando Weekly, "Orlando (and Orange County at large) is notoriously unwalkable, hostile to cyclists and pedestrians, and our public transportation is virtually nonexistent. It seemed appropriate to propose this piece be used in the billboard project, where it'll be seen predominantly by people stuck in increasingly unendurable traffic jams." (Harris' piece, "Eschatology (Swan Song)," can be seen at 210 N. Goldenrod Road.)

Orlando's sophistication in the matter of public art has steadily progressed beyond safe, rainbow-lit, offend-no-viewer installations to more challenging work, although temporariness and/or virtuality seem to be the keywords for anything truly thought- (or emotion-) provoking. High points: Snap! Orlando's augmented-reality City Unseen project and 2015-2017's Art in Odd Places festival. These billboards, too are temporary, being installed throughout the month of January. But viewers can take a closer, standing-in-one-place look at the Corridor Project Billboard Exhibition when CityArts unveils the original works in their gallery for a month starting Thursday, Jan. 20.

"The world would be a better place if art were everywhere," Greene concludes. "More art and more trees make the world much more habitable, and that's important."