The best new additions to Orlando's theme parks in 2015 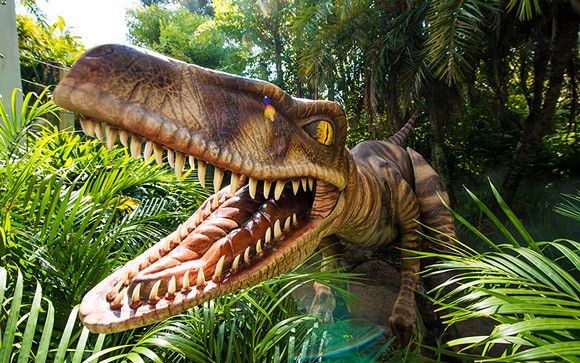 Photo via Universal Orlando
2015 was definitely a slow year in regards to new additions to our local theme parks. Though we didn't get any major new rides in the parks, we did get updates to older attractions, improved dining, cool new retail shops and SeaWorld raising the bar when it comes to passholder amenities.

Here are six of the top 2015 additions to Orlando’s theme parks.

After forever changing the theme park retail environment with the introduction of the Wizarding World, Universal Orlando shook things up again this year with two new shops, each carrying true, one-of-a-kind items. The shops aren’t anything truly revolutionary, but in the oversaturated gift shop landscape that supplies an ever-increasing demand with mass produced, uninspiring cheap tourist trinkets, these shops are a refreshing shift in focus.

Over at Islands of Adventure a new art shop opened on Lost Continent that celebrated the artists themselves with small, in-shop studio space. The gallery was filled with original artwork, most of it for sale. The bringing in of artists isn’t anything new but giving them a space that they can call their own, a workshop and allowing them to sell their items in a unrefined, bohemian-style shop gave a new authenticity to a theme park land that many have been expecting to be the next to leave.

Over at Universal Studios, the former magic shop was quietly replaced by a unique prop shop selling actual items from the park. It does ruin a bit of theming but that is quickly made up in the sheer collective rarity of the items for sale. Never before has a theme park fan had it so easy to buy a true one-of-a-kind item to commemorate their trip to the parks. From actual props from attractions to local art, some made right there in the shop, these new shops help make every trip to the parks fresh.

Awesome new food at all the parks, but mostly WDW

One of the biggest stories of the year by far has to be the beautiful Harambe Market that opened this spring at Disney’s Animal Kingdom. The outdoor dining marketplace adds new, much needed dining capacity to a park that will soon be one of the most talked about parks locally. The dining pavilion is outdoors and does have a very limited vegetarian menu, but overall the new market adds a nice expansion to the Africa section of DAK. The theming is impeccable in the new area. A true, 'lived in' quality has been achieved. The counter service dining area has become a must-see section of DAK for the level of detail the Imagineers applied to it, not even considering the raved about food.

Over at the Magic Kingdom the new Jungle Cruise-inspired Skipper Canteen opened earlier this month. The new sit-down restaurant in the Adventureland Veranda seems to be testing some items that aren’t typical theme park fare. Sustainable fish collar, heads-on shrimp and pho rice bowl are all the menu. The sweets also add new originality to the MK food map. A non-alcoholic Kungaloosh cake and a boba topped frozen drink that’s served in a Moscow Mule tin fill out the menu.

Altogether the parks seem to be moving away from generic food. Over at SeaWorld Orlando, a new pretzel kitchen opened that took the typical theme park pretzel and turned it into a gourmet experience. DHS, Epcot, and Universal were all in on the trend with their own specialty menu items that were tested throughout the year. After years of waiting for the culinary scene that has helped bring Orlando into the national spotlight might finally be entering the parks that helped shape the city.

We’ve all been talking about it for years but 2015 proved to be the year that we finally got major confirmation on new addition coming to Disney’s Hollywood Studios. The park saw many more closures than openings this year but we saw two smaller additions that are good indications of things to come.

The first is the new Star Wars Launch Bay brings new Star Wars meet-and-greets, merchandise and more to DHS. This new pavilion is more of a celebration of the upcoming film than the new land, but it still gives DHS a major Star Wars presence.

Over on Sunset Blvd, a new black box theater recently opened with a new upbeat, 'dance party like' event that runs throughout each day. The new theater will help with the transition the park will be experiencing over the next few years by offering a much more out of the way location for different events that the park runs at different times of the year.

2015 was a year where much of the beloved live performances were canned, but Universal Orlando made up for it with plenty of new, impressive entertainment. New shows at Universal Studios Florida included a food truck-themed improv rap show, a construction-themed percussion show, a fish market-themed acrobats show, and an a capella show. The new shows are part of the replacement for Beetlejuice, which was slated to close this year but now has its closure pushed back to early January. The new acts are designed to fit into the surrounding themes while adding something new in the park.

However, the most impressive new entertainment at UOR might just be a meet-and-greet at Islands of Adventure. The Raptor Encounter in Jurassic Park at Islands of Adventure debuted a few weeks before the new Jurassic World blockbuster. The meet-and-greet is a far stretch from the old guy in a giant head costumes. The outdoor meet-and-greet has lush landscaping that hides most of the puppets less authentic aspects. The full body raptor puppets take on personalities due to their puppeteers, making each encounter unique. The raptors also keep a very authentic mood, sometimes acting up or lunging at an unexpecting guest. The entire encounter has proven that it doesn’t take high-tech talking character heads, interactive queues or fancy reservation systems to provide a great and memorable park experience.

While we didn’t see a lot of huge new updates to the parks (unlike what we’ll see in 2016, hello Rivers of Light and Frozen), 2015 didn’t prove to be completely void of updates. This was more a year of smaller, more understated updates. The most surprising might be the animatronic additions to the final scene in the Gran Fiesta Tour Starring the Three Caballeros. The animatronics of Donald and his two friends (Panchito and Jose´) don’t add much to the ride but do add a bit freshness to an older, often overlooked ride.

Over at Universal Studios, they had their own random and unannounced update last month when the Terminator 2: 3-D attraction replaced its very outdated pre-show video with a new one. Gone are the appearances by Shaq and the Murder She Wrote references, replaced by a soccer player and drone references. The new pre-show video also features new projectors and references to the Terminator movies since T2, though some of that video content has since disappeared from the pre-show.

At Magic Kingdom, Pirates of the Caribbean got in on the action as well with a top-to-bottom update that included new costumes, updates to many of the effects and new lighting. The ride reopened this fall after a closure that lasted most of the busy season.

To the average theme park guest, none of the updates will change their time in the parks, but it’s these updates that keep the parks feeling fresh.

This new addition didn’t get nearly the attention of some other updates but the new passholder lounge is an important one nonetheless. The fancy new lounge, in the former hospitality house at SeaWorld Orlando, is a welcome oasis for passholders who might need a charge, a small bite to eat, or just a place to sit down for a bit. Most of the parks feature special lounges for different groups but what makes the SWO different is the level of amenities, the ability for any annual passholder (Fun Cards not included) and its location.

The location means that SWO doesn’t plan to close the old hospitality house anytime soon, despite rumors of a new attraction going into that space. Opening the lounge up to all passholders also is rather unique, the majority of private lounges in area theme parks are sponsored ones open to specific credit card holders.

This new AP lounge also offers a free Coke Freestyle (similar to the one offered in the Chase Lounge at Epcot), a concierge desk and table-side service with a small bites menu. Unlike most of the other lounges in area parks, the SeaWorld one is open and airy with large windows and an outdoor patio area overlooking a waterfall filled pond. Animal ambassadors often stop by the lounge to allow passholders exclusive educational opportunities with many of the smaller animals. The new lounge perfectly sums up what a good amenity for passholders should look like.