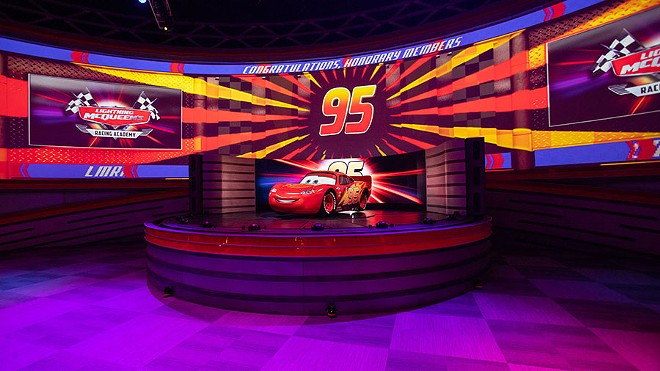 The new 10-minute long show features an impressive audio-animatronic Lightning McQueen along with a massive curved screen that is nearly two stories tall and more than 200 feet long. Outside of the theater is a meet-and-greet with other characters from Cars and a small DJ hosted party.

Housed in the Sunset Showcase, a black box theater that opened next to Rock 'n' Roller Coaster in 2015, Lightning McQueen's Racing Academy is thought to be a temporary attraction that will help give the youngest of guests another thing to enjoy.

The Cars characters were previously seen in a meet-and-greet in the former Pixar Place area. That area was reimagined as Metroville and now has some Incredibles activities in it.

That land, themed to Radiator Springs, has three lands along with multiple dining and retail offerings. The signature ride is Radiator Springs Racers, an indoor-outdoor racing ride that uses the same ride technology at Epcot's Test Track. The DHS version of Radiator Springs was to be scaled down with only the Racers attraction (Toy Story Land's Alien Swirling Sauces is essentially the same ride as Tow Mater's Junkyard Jamboree) plus a few of the retail and dining venues. Concerns for weather issues, like those seen with Test Track, had one version of the DHS ride entirely inside. But eventually, the Radiator Springs plans seemed to have been dropped or at least put on the back burner since no new details regarding the DHS project has been leaked in years.

Few details regarding the future of Hollywood Studios post-Star Wars land have been shared by Disney. With both the Star Wars area and the new Mickey Mouse dark ride opening within the next six months this comes as a bit of a surprise.

Rumored improvements to the Indiana Jones stunt show seem to indicate that at least through the 50th Anniversary in 2021 the rumored new Indiana Jones land, which would have used a ride system similar to the one found on Shanghai Disneyland's Pirates of the Caribbean ride, is unlikely. The same now seems true for other previous rumors, including a Monsters Inc. mini-land, an Incredibles mini-land and the Cars mini-land.

All of those plans now seem to be postponed as the company looks at improvements at other parks, most notably Epcot and the Disneyland Paris resort.

There is a D23 Expo, Disney's in-house version of Comic-Con, slated for this August. Many details on attractions post-WDW's 50th Anniversary are expected from the always popular Parks and Resorts panel.

But many expect Epcot's overhaul to be the primary focus for that presentation with Asian resorts, especially Hong Kong Disneyland and Tokyo DisneySea, also getting a large amount of discussion. WDW's other three theme parks are thought to be getting very little attention at the event.

While the Radiator Springs plans for DHS might now be in limbo, at least Cars fans can finally get some love thanks to this Racing Academy show.