Image via Bioreconsturct | Twitter
Dragon Challenge and Hogsmeade Train Station
Rumors of Dragon’s Challenge being removed from Hogsmeade at Islands of Adventure have been ongoing for years now, and last week Universal finally confirmed that the opening day attraction, formerly known as Dueling Dragons, would be closed.

In recent years the inverted coasters haven’t after numerous incidents where guests were hit with what is thought to be loose items from the other train as it passed. After a man had to have his eye removed due to an injury on the two-coaster attraction, Universal stopped the dueling. In recent years the coaster attraction hasn’t nearly been as popular, due in part to the extremely strict no loose items rule that forced nearly all riders to use nearby lockers. The lockers were not designed for such high demand and often times guests were left waiting longer for a locker than actually standing in line for the ride.

The ride also stood in stark contrast to the rest of the Wizarding World of Harry Potter - Hogsmeade, which is known for extremely accurate replication of the film version of Hogsmeade.

Dueling Dragons Entrance | Image via wikimedia
Not long after Islands of Adventure opened in 1999 Universal built a large sound barrier along Turkey Lake Road after nearby residents complained. The coasters were known as "the first dual roller coaster whose tracks intertwine" and was used in numerous promotional material for the resort over the years.

Universal has confirmed a new “highly-themed coaster experience” will replace Dragon Challenge. As mentioned in 2015, the strongest rumors still point to the new ride as being based in the Forbidden Forest where guests will be able to encounter many of the animals featured in the five-film series based on the book Fantastic Beasts and Where to Find Them. The first film in the series came out last year, with the second planned for November 2018.

Gone is the rumor of a boat ride, likely switched out due to a similar attraction opening in Pandora at Disney’s Animal Kingdom. Ironically enough, the Potter boat ride was based roughly on an earlier plan for a boat ride in the canceled Beastly Kingdom area of Animal Kingdom where Pandora is now located. After was canned due to budget cuts many of the Imagineers working on the project were hired by Universal, where they designed the Lost Continent area of Islands of Adventure using much of the same design aesthetic as .

The boat ride was floated as an option here but was again not built due to cost concerns and the fact that the park already had three water based rides in its twelve-ride line-up. Lost Continent was split in half with the back half becoming the original Wizarding World of Harry Potter. The Forbidden Forest boat ride was once again skipped over with Universal simply updating the existing rides in the area and building the new extremely expensive Forbidden Journey ride.

There are a few strong rumors of what ride system may be coming to the park. Ironically both are linked to projects back at Disney. 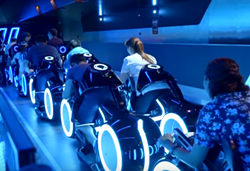 Image via SoCal Attractions 360 | YouTube
TRON coaster at Shanghai Disneyland
The first rumored ride system is a motorcycle coaster themed to Hagrid’s bike with a motorcycle and a sidecar option. A coaster with similar ride vehicles does operate in Australia. It was designed by Intamin, the same ride manufacturer as Harry Potter and the Escape from Gringotts at Universal Studios Florida. The Australia-based coaster has a height limit of 51 inches and was rated as the second worst coaster in the world in its debut year (though it has moved up in recent years, most recently coming in at 310 of the 364 coasters listed). A 51” height limit would give the attraction one of the highest height limits in all of Orlando. In the announcement of the new ride, Universal stated that “it will be fun for the entire family” so such a high height limit is unlikely. Also, Disney just announced a TRON based attraction for the Magic Kingdom that will use a very similar ride system, sans the sidecar.

Image via Mack
Another potential ride system is the Inverted Power Coaster from Mack Rides. Mack already has a presence at Islands of Adventure with Dudley Do-Right's Ripsaw Falls and Storm Force Accelatron. Two Inverted Power Coasters have been built, one in Germany themed to Arthur and the Invisibles, and one in Dubai themed to How to Train Your Dragon. The ride system allows for a height limit of 39 inches and features a unique powered ride vehicle that allows for it to slow down, stop, speed up and turn 360 degrees. Both of the existing Inverted Power Coasters include large dark ride style scenes similar to those used on Universal’s indoor rides. Special effects typical of those used in 4D attractions, lighting, and audio can be integrated into each ride vehicle. Disney was supposedly looking at a similar ride system for its rumored Moana ride, but all indications point to that ride now being shelved for TRON instead.

A third rumored ride system is the SFX Coaster by Dynamic Attractions. Rumors have been heating up lately of ride system making its U.S. debut somewhere in Orlando in the coming years with rumors pointing to this possibly being used in Universal’s Super Nintendo Land, Epcot’s Guardians of the Galaxy ride, or here in Hogsmeade. The ride system, designed for dark ride settings, is similar to Gringotts but allows for much more flexibility including sideways drops, elevator style drops, 360 loops, and much more. A high height limit and similarity to another Potter ride may disqualify this ride system.

The new ride will be highly themed, and numerous sources have confirmed that The Nassal Company, who worked on both existing Potter area at Universal Orlando, is already working on the project.

Dragon Challenge takes up an area nearly larger than the rest of Hogsmeade combined, so there’s a good chance the new area will have more than just one ride in it. Early rumors pointed to an indoor, high capacity ride and a second ride that will be more of an off-the-shelf type attraction but with a custom look and feel, similar to how Universal did with Flight of the Hippogriff. Rumors also point to an expanded dining and retail area, possibly with a full-service restaurant.

Images of a leaked guest survey also show that Universal is asking guests their thoughts on highly themed, multi-day live action role playing experiences such as the new Star Wars hotel being built at Walt Disney World. One of the strongest rumors of a brand for Universal to link to such a concept is Harry Potter. If a Potter themed hotel was built on the current Universal property, the Dragon Challenge area would be a good option due to its central location to both Potter areas. The only other strongly rumored franchise linked to the multi-day role playing experience is Jurassic Park.