Back in December of 2015, we reported that Universal was looking at ways to integrate the (at the time) upcoming Fantastic Beasts films into the Potter universe at the parks, specifically within Hogsmeade in Islands of Adventure.

A family boat ride was rumored but as we stated it was likely shelved due to a similar ride opening as part of the new Pandora area at . In June 2016, we circled back to the rumors that Dragon Challenge at Universal’s Islands of Adventure might be getting an update or completely gutted.

By November, the rumors had all shifted to Dragon Challenge getting axed for a whole new Forbidden Forest mini-land where multiple rides, new and other updates would be added to help alleviate the always crowded Hogsmeade. 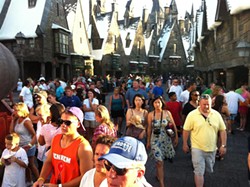 Now it looks like the rumors are back, with both the Orlando Business Journal and Attractions Magazine supporting many of the details previously shared on here.

Richard Bilbao of the Orlando Business Journal posted an article March 21 in which he states unnamed source close to the project has confirmed that Dragon Challenge is nearing the end of its life. He quotes the unnamed source as stating that the new ride would be based in a forest setting with both indoor and outdoor segments.

Two days after Bilbao posted his article at the OBJ, local based tourism publication Attractions Magazine published an article in which they confirm they’ve heard similar rumors adding that their sources have stated that the new attraction will feature "magical animals," while not specifically tied to the Fantastic Beasts films.

The article also says “Universal Orlando’s rumored plan is to remove the coaster track, demolish the queue, and completely rework the space. This includes a new entrance, new queue, new locker system and an overhaul of the land itself.” It isn’t clear if this includes the expanded retail and dining options that we mentioned back in 2015.

Both the OBJ and Attractions mention new patents from Universal that do seem to point to something similar to the “Floo Network” from Harry Potter. The patents would allow "walls" to move seamlessly around guest vehicles. Neither article mentions the shelved boat ride, this likely means the ride’s storyline was kept, but the ride vehicles themselves were updated to better distinguish themselves from those in Pandora.

Keeping with a similar timeline as we reported in November, both the OBJ and Attractions state that the ride is aimed to be opening around 2020. This is likely part of a larger slew openings that may also include updates to Diagon Alley, the new Nintendo area, and major updates to Universal’s other I-Drive area properties in an attempt to offset the significant new updates slated for Disney World’s 50th Anniversary celebration in 2021.