Photo via Disney
Ahead of Walt Disney World’s 50th Anniversary celebration, more than half a dozen new restaurants are in development across the resort, including one that sits on top of a lake, two rooftop restaurants, and a cantina within the upcoming Star Wars land. But arguably one of the most anticipated restaurants Epcot’s space new restaurant.

Operated by the Patina Restaurant Group, the same company behind Epcot’s Tutto Italia and Via Napoli restaurants, the new space-themed restaurant will offer simulated views into space with diners sitting in a spaceship themed dining room. Disney has confirmed that the new restaurant will be located between Mission: Space and Test Track, but the company has given few details on what exactly diners can expect.

As previously reported, the dining room is believed to have two levels with 376 seats that diners access via "shuttles" similar to the Hydrolators that the Living Seas pavilion previously used. Back in May, when the details regarding the dining room and bar area were supposedly leaked, the biggest missing detail of the design was the restaurant’s lobby area, where guests would wait before taking the "shuttle" to the restaurant.

Now new details on what this area will include are slowly coming to light. 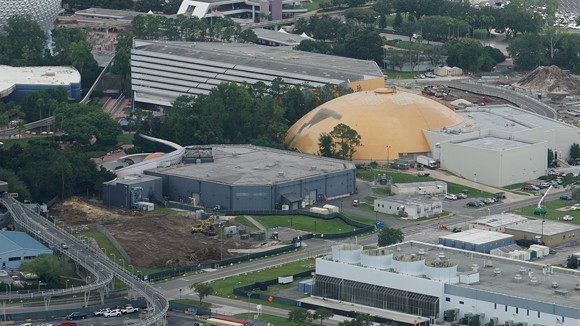 Image via Bioreconstruct | Twitter
The land clearing for the new space-themed restaurant is now visible. The small, box-like unfinished corporate lounge can be seen in the middle left of the image adjenct to the Mission: Space attraction.
With the location confirmed and land clearing well underway, it looks like Disney will keep the corporate lounge building that sits just to the right of the Mission: Space ride building. The ride’s original sponsor, HP, opted for a smaller lounge overlooking the ride queue instead of the larger lounge out to the side of the building. The unfinished lounge has a mirrored glass front that blends well with the existing pavilions and is well hidden behind a small hill of shrubbery. It’s unlikely any significant changes will occur to the outside of the existing building.

The two-story unfinished lounge reportedly has two fully functioning elevators already within it. These elevators are expected to be updated with large digital screens, similar to those used by tourists to access the viewing platforms at One World Trade Center and the Burj Khalifa. The space restaurant would use these screens on the elevator to simulate the trip to the space station. This is a more involved experience than many had initially thought. Unlike the Gringotts ‘elevators’ where only the top corners are screens these would have screenings fully stretching across the walls and ceilings.

After exiting the elevators, diners will enter into the newly constructed restaurant that will be connected to the rear of the existing lounge. After walking through a small hallway, guests will enter into the main dining room that, according to insiders, will have a 250-foot-long digital screen that flanks the back of the curbed room. This screen will have screens of space very similar to those seen on the ride next door with occasional Disney touches, such as Wall-E and EVE flying by. These screens are expected to use the same 3D like depth technology that Disney will be using inside the upcoming Star Wars hotel.

After their meal, guests would use the elevators to exit the restaurant back into Epcot.

The opening date is still believed to be sometime in late 2019 or early 2020, around the same time as the new Star Wars land is due to open at Hollywood Studios.

The menu, name, and price point for the restaurant have yet to be disclosed, but with most Disney World restaurants accepting reservations six months in advance, we’ll likely learn all those details within the next 12 to 15 months.