Disney has promised greater diversity. These Imagineers are charged with making sure that happens 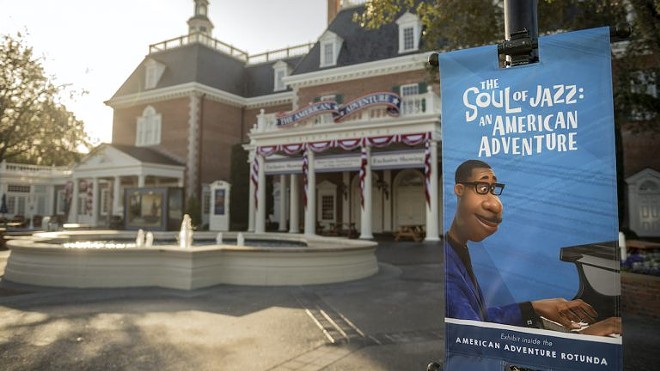 Image via Disney
The Soul of Jazz: An American Adventure exhibit opened in Epcot on February 1, 2021
Amid last year’s national reckoning with racism and equity, rumors emerged that Disney was forming a Diversity and Values Review Team to address, er, problematic attractions. Now, as the company confirms the second attraction in less than a year will be updated, we’re learning new details regarding Disney's internal review.

At the top of the leaked list was Splash Mountain. Within two weeks of the list going public, Disney confirmed that the attraction would get an overhaul to celebrate its first Black princess, Tiana. At the time of the leak, insiders noted that the public list wasn’t complete and they expected updates to other attractions in the coming years, most notably the Jungle Cruise.

On Jan. 25, Disney confirmed that ride would also get a major overhaul. In announcing the update to the beloved boat ride, Disney quoted Imagineer Carmen Smith, who acknowledged the company’s push toward better representation within its attractions. 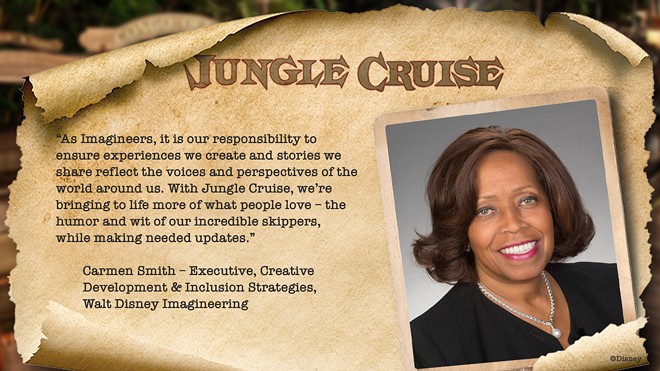 Image via Disney
Smith is no stranger to addressing diversity within Disney attractions, yet many fans know little about her. This may soon change.

Thanks to her wide-reaching influence, Smith may become one of the most influential Imagineers in decades. Inside Imagineering, she plays a crucial role in the editorial process of attraction development. She’s already confirmed to be involved with two major attraction overhauls within Disney Parks. She’s also one of the main voices behind Epcot’s new Soul-inspired jazz-themed exhibit. More than half a dozen other classic attractions are rumored to be receiving updates in the coming years, and it’s assumed Smith will play a role in these projects as well.

Her role in the Splash Mountain redo put her on the radar of many fans, but she’s been pushing for more diversity within Disney for years. She led the project that became the IDEATION Summit, an internal event that encourages more diversity, of people and ideas, within Disney. By 2015, the annual Summit hosted more than 2,000 cast members. Her lifelong mission of celebrating diversity has garnered her international attention and numerous awards. In 2020, she was ranked as one of the 10 most influential people in the theme park industry by industry news site Blooloop.

Image via D23 | Disney
Charita Carter, Senior Creative Producer/Manager at Walt Disney Imagineering.
Like many of Disney’s higher-ranking positions, leadership within Imagineering still lacks the diversity the company is now working to better represent within its attractions. There have been some recent exceptions.

Charita Carter, a Black Imagineer known for her interviews with diverse media outlets such as Black Girl Nerds, is heading the Splash Mountain reconceptualization. She’s also credited with leading the development of the popular Mickey and Minnie’s Runaway Railway attraction, which, after a successful opening at Hollywood Studios, will now be developed for Disneyland in California.

Image via Disney
A screenshot from Disney's website showcasing their leadership as of February 2021
In the wake of George Floyd's murder, Disney's current CEO, Bob Chapek, made news when he, along with Executive Chairman Bob Iger and Latondra Newton, the company's Chief Diversity Officer, penned a public letter acknowledging the need for "real change." In 2019, then still CEO, Bob Iger "vowed" to bring diversity to Disney's leadership — a promise that so far has remained largely unfulfilled.

Still, despite Smith’s hard work over the past 15 years in Imagineering and company leadership acknowledging the issue, diverse voices like Carter’s remain the exception.
Smith was an obvious choice to lead the companywide effort. She served as the Vice President of Global Strategies for Diversity and Inclusion for Walt Disney Parks & Resorts. That role transitioned into the wider-reaching Imagineering role she now serves, alongside her duties as a Creative Development Executive. According to a Disney spokesperson who spoke to the Orlando Weekly regarding Smith, her role within Imagineering “focuses on relevancy and inclusion across all projects.”

Splash Mountain and Jungle Cruise look to be just the start of a much-needed refresh to many dated Disney Park attractions. From Peter Pan to the Carousel of Progress, Disney says it's looking to update its attractions to better represent its values. It’s also begun addressing the issue with warnings and age-associated locks on some older films on Disney+.

But even with these moves and as voices like Carter’s and Smith’s become more authoritative, the company has a long road ahead. On the Disney World website, the former Dixie Landings resort (now part of Port Orleans), still welcomes visitors to "bask in the grace of the Antebellum South."

Also, Disney has yet to give any solid dates on when the updates to Jungle Cruise and Splash Mountain are to take place.
click to enlarge 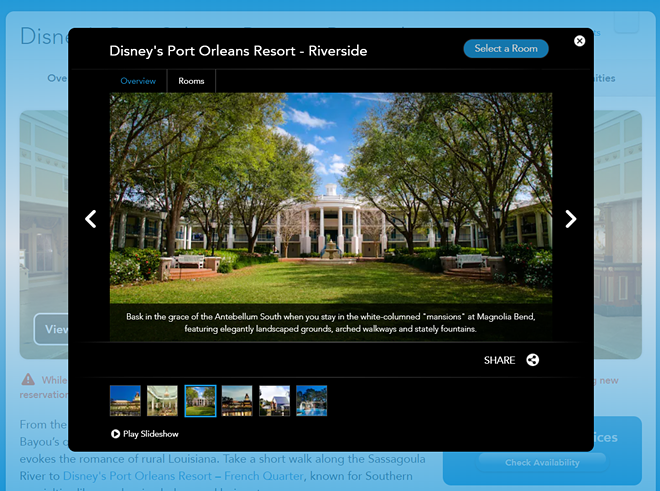