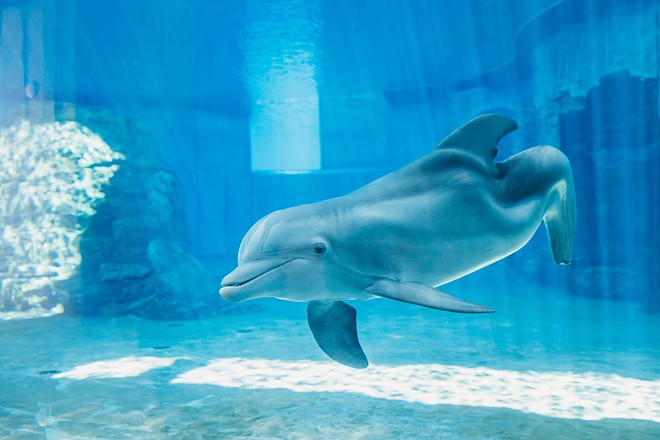 Her death, like her life, brought international attention to the small Gulf Coast marine animal rescue facility where she lived all but a few months of her life. In the hours after announcing her death, the aquarium saw their website go down under the strain of interest.

When Winter was rescued in late 2005, the Clearwater Marine Aquarium was still trying to move past a wave of negative attention it had faced since 2001, when its previous star of the aquarium, Sunset Sam, had passed away. Despite a twenty-year record of rescuing more than 400 marine animals, when the aquarium brought in a pair of sunburnt dolphin calves, it was still operating out of a former sewage treatment plant, with the large concrete tanks that once held wastewater now being used to rehabilitate marine animals.

Winter’s rescue wasn’t initially unique and seemed par for the course of the many that had come before her. But after it became clear her tail couldn’t be saved, the aquarium worked with a prosthetics company to develop a one-of-a-kind groundbreaking prosthetic tail for her. Their innovative approach to assisting Winter brought international attention to the small rescue facility, and soon droves of fans were flocking there to see the miracle dolphin for themselves. Winter became an unofficial mascot for children with prosthetics. In the years since, CMA has welcomed countless numbers of these children, helping facilitate pilgrimages to the aquarium for some of them. 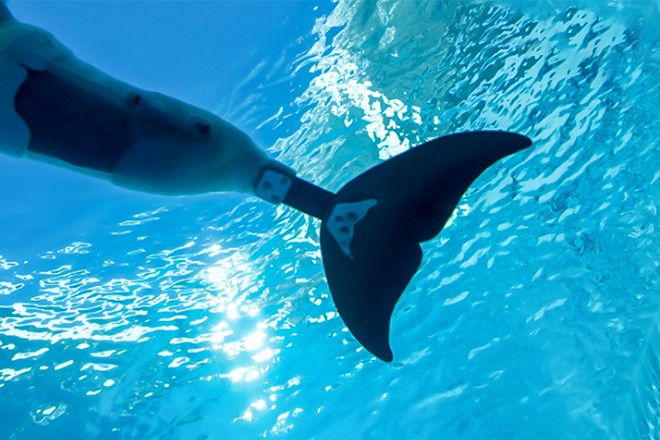 Image via the Clearwater Marine Aquarium
The custom prosthetic developed for Winter the Dolphin
By 2008, Winter’s story had become a national sensation, with the aquarium raising for more than $2 million to build a custom dolphin habitat. By this time, a book and a documentary were in the works. Crowds continued to grow, and in 2011, Winter starred alongside Harry Connick Jr., Ashley Judd, and Morgan Freeman in a Hollywood film about her rescue and rehabilitation. A sequel in 2014 brought attention to two other dolphins at the aquarium, Mandy and Hope, but Winter remained the star of the aquarium. The pair of Hollywood films were filmed, in part, at the aquarium, which ensured the sets remained for fans to visit.

By this time, it was clear the rise in attendance wouldn’t be letting up, so the aquarium embarked on the largest expansion in its history. Breaking ground in 2016 after successfully outmaneuvering critics of the growing attraction, the Clearwater Marine Aquarium began a multi-year reimagining that saw its dolphin habitat double in size, its educational space triple in size, and the addition of a much needed 400-space parking structure.

Last year saw the expansion delayed, but a hotel dedicated to Winter opened nearby. Winter the Dolphin’s Beach Club is a full-service beachfront hotel that’s an easy boat ride away from the aquarium. The environmentally conscious hotel is filled with playful nods to Winter and the marine animals helped by the nearby aquarium. Image via the Clearwater Marine Aquarium
Concept art of the new manatee exhibit proposed for the Clearwater Marine Aquarium
The $80 million aquarium expansion opened earlier this year. At that time, the non-profit aquarium announced its next phase, a reworking of the former dolphin habitat into a natural-looking manatee rescue facility. It would be home to marine animals unable to be released back into the wild with a separate facility a few miles away designed for those with less demanding rehabilitation needs. This new $10 million upgrade was paired with the premiere of a documentary focused on the aquarium’s rescue efforts. A party celebrating the decade since the first Dolphin Tale movie's debut took place in September, one of the first major events at the aquarium since the pandemic.
After years of playing catchup with demand and attention, the aquarium was finally moving into a new phase with its marketing and educational efforts. Then, came news of Winter’s illness.

First thought to be a gastrointestinal infection, the aquarium brought in marine animal experts from around the nation to help the sixteen-year-old dolphin. A week later it was clear she wouldn’t make it. Before surgery on Thursday, November 11, Winter passed away for what they now believe was an intestinal torsion. The aquarium, already planning to close its doors in an effort to focus on Winter's recovery, instead stayed closed to give staff and volunteers the time needed to privately mourn her passing. Since then, it has reopened with crowds visiting the exhibit dedicated to one of the most famous dolphins in history.

In lieu of flowers, the aquarium requests donations to help them continue rescue efforts like they did with Winter. Within the first twenty-four hours, more than 500 people had donated more than $30,000.

The Celebration of Life observances will begin on November 20 with a private early-morning ceremony for all active CMA staff, interns, and volunteers. Admission to the aquarium has been lowered to $16 in honor of Winter on November 20 and 21. Flower arrangements and visual tributes will be on display throughout the exhibit dedicated to her. Screenings of her original rescue and the Hollywood film she starred in will also occur throughout the weekend. Saturday evening will see a private memorial for CMA community partners and local leaders. That ceremony will also be live-streamed. Other memorial activities will continue through November 24.

For those unable to visit the aquarium, a special website, RememberingWinter.com, has been set up for anyone to leave their memories or make a donation in her honor. Events throughout the week of remembrance will also be livestreamed on the site.
click to enlarge Image via the Clearwater Marine Aquarium