An exciting new era for Orlando Fringe kicks off this week

The newly christened Fringe ArtSpace promises to be the affordable, accessible downtown venue that local performers have long desired

This time last year, the sixth annual Orlando Fringe Winter Mini-Fest was forced to cancel its in-person performances with only a week's notice, thanks to the then-surging Omicron variant. Just a few months later, the Fringe-friendly management of HÄOS on Church Street (which was planned to be a key festival venue) moved on, further dashing hopes for the Festival's triumphant expansion back into downtown where it began.

But following that devastating double blow, Fringe's fortunes took a turn for the better in the back half of 2022. After evicting Mad Cow Theatre from their rent-free home over years of unpaid fees, the city of Orlando handed Fringe the keys to the theater complex at 54 W. Church St., finally giving the 30 year-old organization a permanent year-round presence. Now, an exciting new era for Orlando Fringe kicks off this week with the revival of Winter Mini-Fest in the newly christened Fringe ArtSpace, which promises to be the affordable, accessible downtown venue that performers have long been pleading for. 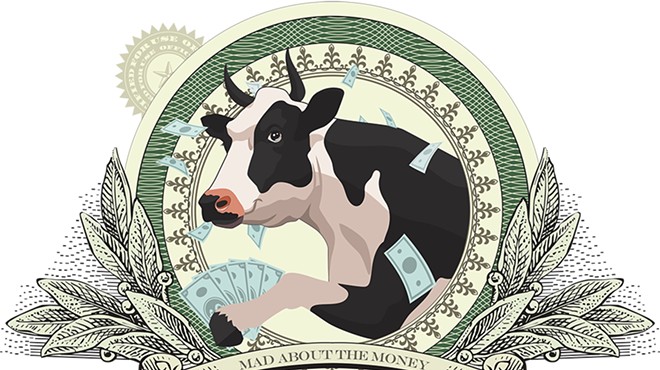 Mad Cow Theatre is coming under fire after local artists allege they haven’t been paid: Mad about the money

The city of Orlando, with support from the Downtown Development Board, installed Orlando Fringe in the 9,100-square-foot Fringe ArtSpace with the mission of activating its two theaters (a 166-seat mainstage and a 60-seat black box), as well as the plaza it overlooks, with "artist-focused programming" focused on "building a dynamic, inspiring community of artists and arts lovers with the purpose of providing artists a safe environment to create, experiment, collaborate and showcase their creations."

"Fringe exists to create a platform for artists," says Fringe executive director Alauna Friskics, who has been working with her team for months to prepare ArtSpace for its grand opening bash on Wednesday, Jan. 11, which will feature a ribbon cutting with Mayor Dyer and a free street party. "We've been successful in this for two weeks each year for over 30 years with the Orlando International Fringe Theatre Festival. And now, with Fringe ArtSpace, we are able to lift up voices of independent artists year-round."

Fringe ArtSpace's opening event also doubles as a preview for the seventh Orlando Fringe Winter Mini-Fest, which runs Thursday-Sunday, Jan. 12-15. This year's lineup of 20 shows, curated by outgoing festival producer Lindsay Taylor, combines a mix of acclaimed encores from previous Fringe fests (including Rosegold, The Sack, Coffee and Cedar, Always Now, experiMENTAL and Cross Country), with previously unseen works from favorite Fringe artists. Some of those — like Paris Crayton III's family drama Bloodline, Sean Keohane's puppet musical The Everglads and Erika Kate MacDonald's The Barn Identity — were originally supposed to premiere last at last year's Mini-Fest; MacDonald actually ended up debuting her charmingly unhinged musical rant about decrepit farm buildings on my back patio, before officially opening it at the 2022 Cincinnati Fringe Festival.

Other Mini-Fest offerings are a mix of old and new, such as The Awkward Ballerina, starring Montreal-based storyteller Kristen Govers in her area debut, originally directed by Fringe legend T.J. Dawe. Producer-director Beth Marshall, a longtime Orlando Fringe fixture and the Festival's former producing artistic director, predicts that "Orlando audiences will immediately be taken with her awkward charm, and her story of having to reimagine her dreams of being a ballerina when she learned she had cerebral palsy. It's a story of hope, inspiration and empowerment, perfect to start off 2023."

Best of all, Winter Mini-Fest offers an opportunity to be introduced to artists who are entirely new to Orlando, like Los Angeles's Bonnie He and Atlanta's Mark Kendall. He's award-winning A Terrible Show for Terrible People, is a one-person physical comedy with only two spoken words, and she says that she's "excited to bring my PG-13 filth to Orlando audiences. You're not just watching a show, you're participating in the destruction of human decency." Kendall will be previewing his button-pushing semi-improvised sketch comedy Critical Race Theory for Kindergartners here ahead of its official premiere at Atlanta's Alliance Theatre (as the first winning commission of the theater's James Anderson Prize), which he says will be "a fun opportunity for patrons to see a show early on in its development process."

Whether they're first-timers or multi-decade veterans, everyone involved expressed extreme excitement at being among the first to perform under the Fringe ArtSpace banner. "It's a huge honor to not only be personally selected to be a part of the 2023 Orlando Fringe Winter Mini-Fest curated lineup, but to be one of the first shows christening the brand new Fringe ArtSpace Mainstage," said He. Marshall says she's "always thrilled to be involved with any and all things Fringe. ... Basically, I just go where Fringe goes!" And Kendall says he's "heard so many great things about Orlando and their Fringe community for years and I am looking forward to finally getting the chance to experience it."

Once the four-day Mini-Fest ends, Fringe ArtSpace will swiftly roll out its inaugural season of mainstage shows, starting with the premiere of Genesis, running Jan. 26-29, the latest dance epic from BlueLaLa's VarieTease. February brings Carrie the Musical, in collaboration with William Daniel Mills Theatre Company; followed by Will Eno's Middletown, with an all-star cast directed by David Lee for Kangagirl Productions & Ant Farm. In March, Beth Marshall presents Arius, a Black queer artist, in A Quarter of a Century ... and then some!, and Descolonizarte Teatro stages the Spanglish comedy Nuestra Señora de la Tortilla, before ArtSpace becomes the Fringe Festival's new Purple and Teal venues in May.

This initial spring season was programmed by Joshian and Kayla Kelsay Morales of Kelsay + Morales Company, who say "the programming will be a living, breathing model that continues to evolve and adapt based on the needs of our community." I attended one of the public brainstorming sessions used to develop future programming and am optimistic about its diversity, ranging from traditional shows to pop-up artistic events and educational seminars, featuring both local and touring performers in the spirit of New York's 92nd Street Y.

I'm especially eager to hear details about Fringe's plans to offer affordable rehearsal and performance rental space to Orlando's many nomadic producers, and to mentor emerging companies with showcase productions. Friskics promises, "This curated season is just the beginning. We have so much more in store and are looking for many more ways to bring artists together and let their voices and stories be heard. Stay tuned for much, much more."