Walt Disney World scales back its 50th anniversary, but still moving forward with some projects

It’s clear that things won’t be back to normal anytime soon, and that means Disney World, which has leaning on its upcoming 50th anniversary to attract record-breaking crowds, is now being forced to rework its plans for the foreseeable future.

Early this month, permits for “Project Nugget” were filed. The permits themselves are for some basic infrastructure projects that were put on hold earlier this year. But while this actual project isn’t anything noteworthy, Project Nugget is.

There have been conflicting reports from various insiders on what exactly Disney has in the works. This is due in part to the shorter-term thinking that is required during these unique times. Many projects are still very much in limbo thanks to the uncertainty that the pandemic induced economic slowdown. There has also been numerous leadership shakeups, which has led to more confusion within the rumor tracking fan community.

"Project Nugget" is the catch-all codename for Walt Disney World’s 50th-anniversary developments. tweet this
Instead of launching the 50th anniversary in early 2021, Disney now looks to be pushing it back to October 1, the actual anniversary date. The celebration would then last the typical 15 months that Disney uses for an anniversary, meaning it wouldn’t end until late 2022. By October of next year, there should be some significant progress being made on fighting back COVID, with the economy also hopefully beginning to recover then.

Across Disney World, most of the projects that will be used in marketing efforts surrounding the 50th anniversary are things already in the works. The Guardians of the Galaxy ride at Epcot are reportedly on hold due to issues with getting the actors from the films to do the scenes for the ride. According to industry insider Jim Hill, originally a day of production on the set of the newest Guardians film was to be set aside for the quick scenes that are to be used in the ride, but, like the rest of Hollywood, the production was postponed due to the pandemic. Hollywood is slowly beginning to reopen, with some productions starting back up.

Director James Gunn confirmed earlier this month that Guardians of the Galaxy 3 is still set to be released in 2022, meaning that production must resume sometime soon. Once it does, the scenes needed for the ride can be quickly filmed and added to the ride. This gives the ride a late 2021 or 2022 opening date.

Other major Epcot projects that will be used in the 50th Anniversary marketing are the nearly completed Ratatioulie ride, the Play Pavilion, and the new nighttime show, Harmonious. But other Epcot projects, like the multi-level Festival Center, would likely be delayed until mid-decade, at the earliest. Some projects, like the Mary Poppins attraction, now look to be canceled completely.

Delays in other projects may mean they won’t open in time for the October 1 anniversary. Instead, Disney may use the 50th anniversary, now stretching into the end of 2022, as a time to roll out new offerings every few months. Magic Kingdom’s TRON coaster, which, based on comparative construction timelines from the Shanghai version, looks to be a bit behind schedule, may have to be included in this post-October 1, 2021, rollout. 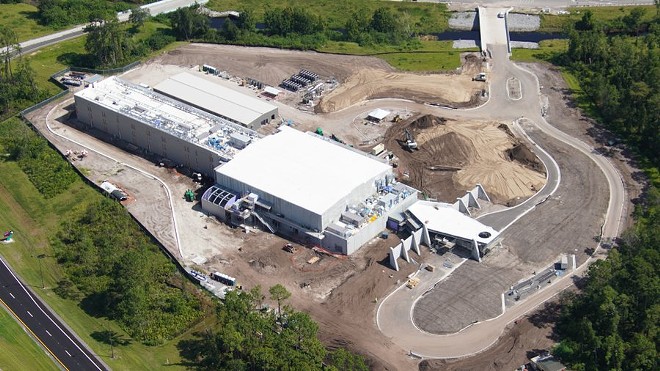 Also, debuting during the 50th Anniversary celebration will be the Star Wars hotel, Star Wars: Galactic Starcruiser. Like other projects, this one is already well underway, so the best option is to continue forward with it. Other new hotel offerings, like Reflections and other unannounced hotel projects, all seem to be on an indefinite hold as the company looks towards more reliable economic forecasts.

Disney seems to be hedging their bets that by the end of 2021, people will be interested in traveling once again, but the company is still hesitant to spend big bucks on new hotels or attractions. Instead, this muted 50th anniversary will see many smaller upgrades that have been needed for some time, along with the handful of big-budget projects that were already underway. With just over 400 days left until the 50th Anniversary, Disney must work now if it wants to ensure this is an anniversary not to be forgotten. However, for many in the company, with whom the current pandemic is front of mind, 400 days still seems like a distant dream. Like every aspect of life right now, Disney World’s future is still very uncertain.

As Holness explains, “2020 has brought the same precariousness to the Disney Parks that it has brought to the rest of the world. It’s hard to tell, especially now, what Disney will deem worthy of spending money on.”

« Corcoran: Use 'surgical' response t…  |  Thanks to the pandemic, Universal O… »