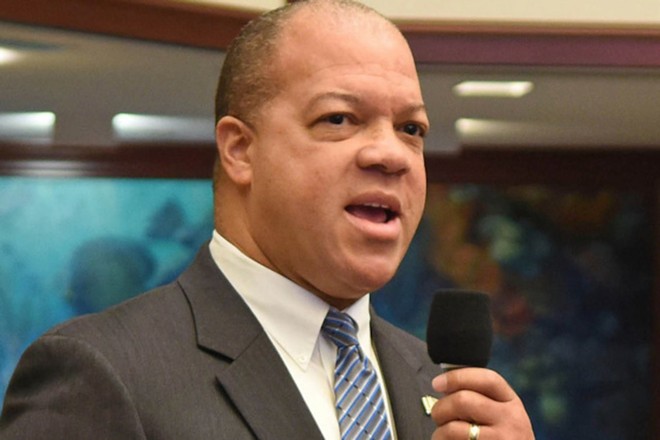 Today, the far-right extremist group The Freedom Speaks Coalition will host an all-day conference with state lawmakers in Tallahassee to explore how Florida public schools can "protect our kids from the dangers of the LGBTQ ideology."

According to a press release obtained by the Tallahassee Democrat, speakers and guests at "Parent Power 2020" include Ann Bowden, the wife of former Florida State Football Coach Bobby Bowden, and Republican House Rep. Mike Hill, who was criticized by GOP leaders (but was not called on to resign) last June after audio was released of him laughing at the idea of biblically stoning gay people to death.

"No child should be subjected to the ravages of the Drag Queen and LGBTQ mentality in today’s classrooms and libraries," said the group in the press release. "No child should be forced to think about 'gender fluidity' much less be told they will one day have to choose one."

Bobby Bowden also issued a statement, which was posted to the conference's event page. "Some geniuses decided schools should be teaching kids about sex," says Bowden. "Now folks, I'm talking about little kids, and not your normal sex stuff. The stuff they're teaching is just plain wrong and it sure ain't godly. Mama's and daddy's need to be teaching their kids about sex , the daddy's to the boys, and the Mamas to the girls. And backed up by the bible."

Other guests at the event include former Florida Rep. Bev Kilmer, Alex Newman of Liberty Media, Dexter Sanders of Liberty Pastors, Keith Flaugh of Florida Citizen's Alliance, Paul Blair of Reclaiming America for Christ, Lunn Meagher of Hands Across The Aisle, and Renate Ferrante of the Collier County Abstinence Program.

Freedom Speaks’ website features a laundry list of extremely bigoted and racist mission statements, which include squashing abortion access, protecting grade school children from the “ravages of LGBTQ-Gender Training,” and stopping the “Infiltration of Radical Islam in all phases of Education and American Government.”

Last September, members of the Freedom Speaks Coalition protested and shutdown a hate crime discussion panel in St. Cloud, Minnesota, because the event involved the Council on American-Islamic Relations.

Besides trampling on LGBTQ rights, Hill clearly has a lot in common with fringe groups like the Freedom Speaks Coalition. Last month, the Pensacola congressman refiled his controversial fetal heartbeat anti-abortion bill, which would make it a felony to perform an abortion on a woman if the baby’s heartbeat is detected.