As thousands of communications workers strike across the southeast, Orlando has eight AT&T picket lines 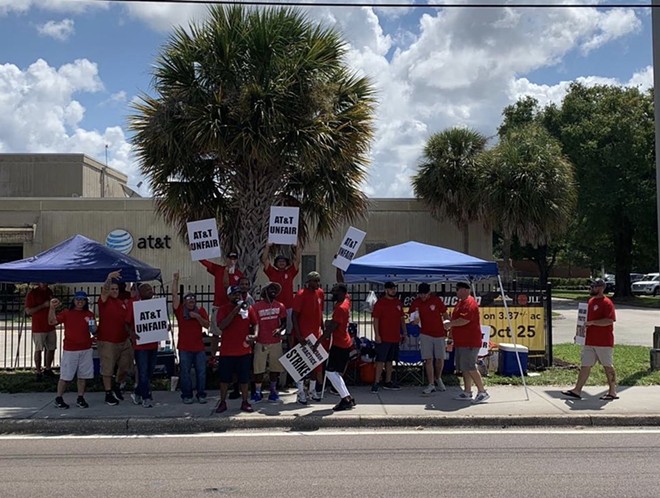 As more than 20,000 AT&T workers strike across the southeast United States, at least 400 of them are joining picket lines in Central Florida.

Hundreds have been protesting at nine Central Florida sites for the wire line telecommunications network since Saturday, said Steve Wisniewski, president of the Local 3108, the Orlando-based union. Eight of the picketing sites are in Orlando and one is in Lake Mary.

The union, Communications Workers of America (CWA), called for the strike due to alleged "unfair labor practices." While union officials did not discuss numbers, communications director Beth Allen said their main grievance is that the representatives AT&T has been sending to the bargaining table do not have the authority to make decisions.

She said the company had not been bargaining in good faith, a claim echoed by Wisniewski.

AT&T made over $19 billion in profits last year. Executives at AT&T cannot have it all.

I call on the management of AT&T to go back to the negotiating table and bargain in good faith with your employees. pic.twitter.com/0KVeVGxReN


I stand with all the @CWAUnion members who are making their voices heard. @ATT must respect workers' rights to join a union and bargain collectively, and they should come to the negotiating table in good faith. #ATTUnfair

Jim Kimberly, an AT&T spokesman, said "we strongly disagree with the union's claim of unfair labor practices." As for their method of bargaining, he said the company is using the same negotiation practices it has in the past years.

“A strike is in no one’s best interest. We remain ready to sit down with union leaders to negotiate a new, improved contract for our employees...We listen, engage in substantive discussions and share proposals back and forth until we reach agreement," Kimberly said in an emailed statement.

“That’s why we’re surprised and disappointed that union leaders would call for a strike at this point in the negotiations, particularly when we’re offering terms that would help our employees – some of whom average from $121,000 to $134,000 in total compensation – be even better off."

Politicians have shown support of the workers at the local and national level. U.S. Rep. Darren Soto D-Orlando, came out to a local picket line, megaphone in hand, to give a pep talk to workers and lead a few chants.

Here's a list of the Central Florida AT&T work centers with picketers: