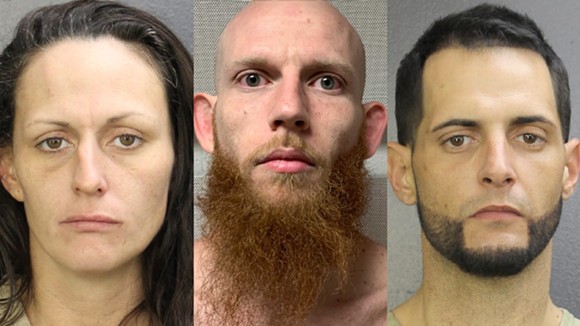 Police arrested three people who were part of a gang that kidnapped, robbed and tortured an undocumented man in South Florida because they believed the immigrant would be too afraid to call the authorities.

The victim told officers that he was driving his Chevrolet Silverado in Davie on Feb. 2 around 9 p.m. when he halted at a stop sign. A man who investigators later identified as Joshua Aaron Greiff, 30, stood directly in front of the vehicle as Natalie Rebecca Williams, 34, came up to the front passenger side, according to the arrest affidavit.

Williams asked the victim if he could give them a ride. When he declined, Williams repeated the question while reaching inside of the truck and attempting to open the door from the inside while Greiff walked toward the rear driver's side of the truck to sit behind the undocumented man.

The victim, with hesitation, decided to give them a lift. Police say as they started to drive, Williams pulled out a black handgun, loaded the firearm and pointed it at the victim.

They made him drive to a mobile home in Davie, and then Greiff blindfolded the victim, the arrest report says. The victim told police Greiff and Williams ordered him to exit his truck and walk to the mobile home. Once inside, they took off his blindfold, tied his hands behind his back and ordered him to sit in a chair. Police say six men, including Greiff and 31-year-old Andres Rafael, were in the home, as well as Williams, who appeared to be the gang's ringleader.

The suspects ordered the undocumented man to empty his pockets and then took turns punching him in his face, neck, head, stomach and back. The victim told police Williams warned the gang they should kill him because he had seen too much, according to the affidavit.

The gang asked for the victim's bank information, threatening to kill him if he gave them the wrong information. They stole the $1,387 in cash the victim had in his pockets, and left with his debit card and keys to his truck.

Willians and Greiff later returned to the mobile home and again threatened to kill the victim if he notified police, the report says. The undocumented immigrant told investigators that Greiff and Williams said that because he is an "illegal alien," he would get deported by police. Williams allegedly also threatened to accuse the victim of raping her if he notified the cops.

After about 12 hours had passed, Greiff finally untied the victim from the chair around 8:45 a.m. on Feb. 3, gave him his trucks keys and let him go. After fleeing the area, the man saw the suspects had also taken about $4,000 in tools he kept in the vehicle, as well as damage to the Silverado.

The victim went to a clinic, where he got nine stitches and was treated for heavy bruising on his face, stomach and back, according to the affidavit. He eventually led officers back to the mobile home where they found Williams, Greiff and Rafael.

Williams denied kidnapping and robbing the victim, but she did tell police the undocumented man attempted to rape her. She later said she took him back to the mobile home after the alleged rape and that other people beat him up, according to the report. In a confusing moment, Williams allegedly told police she knew the victim for more than 12 years but couldn't recall his name. Investigators say she told them the victim voluntarily gave them his debit card and PIN number so they could withdraw money, the report says.

Williams, Greiff and Rafael were charged with felony counts of armed robbery, kidnapping and aggravated battery. All three are currently being held at the Broward County Jail.

NBC Miami reports police believe there may be more victims involved in this case and will continue the investigation.