Year in Review: The most important Orlando stories of 2022

From rent control to redistricting, this was the news that meant the most 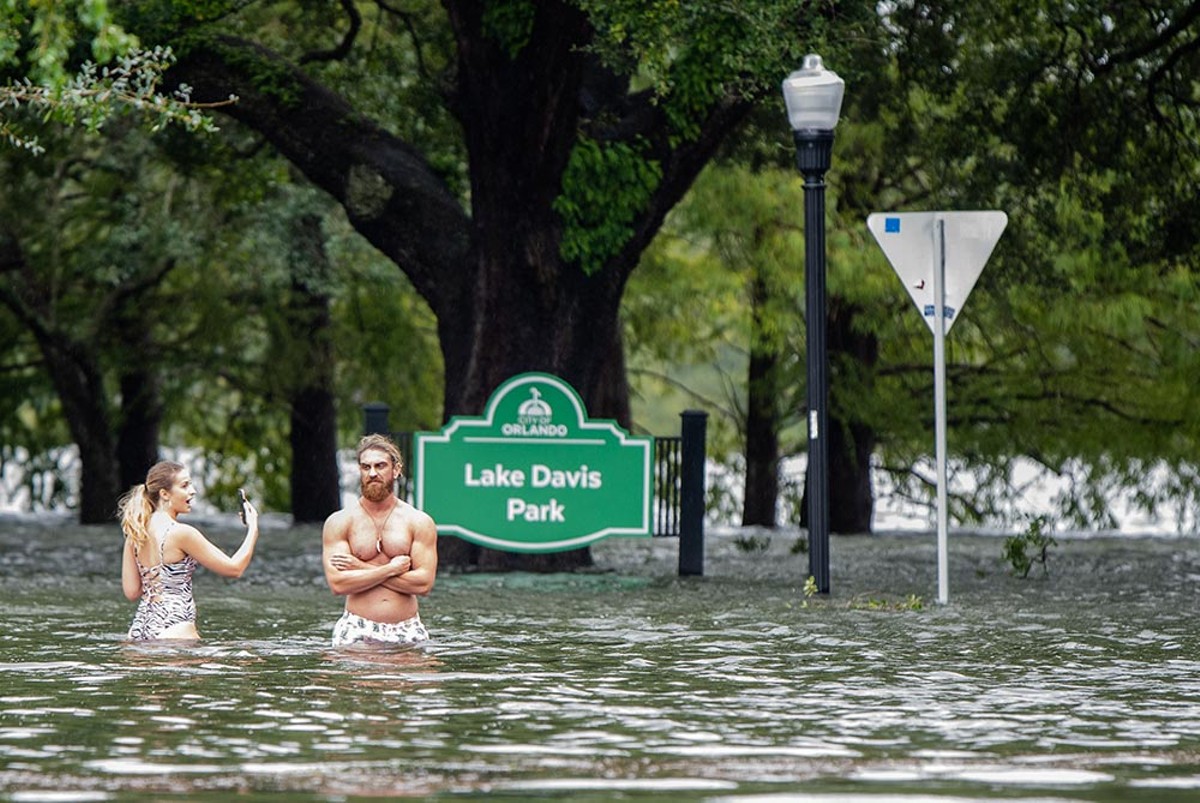 2022: You’re soaking in it. photo by Matt Keller Lehman

If you were brainstorming a punchy opening image for a post-apocalyptic film centered in Orlando, the sight of a flooded-out Lake Eola Park would surely be a contender. And that's exactly what Hurricane Ian did. Ian made landfall in Florida on Sept. 28 as a Category 4 storm, tearing through Fort Myers and Cape Coral as it made its way toward Central Florida. The storm lingered over our area overnight and into the next day, dumping between 14 and 20 inches of rain and lashing Orlando with high winds before finally moving northward. Disaster averted, right? Not a chance. The flooding and damage Ian wrought was jaw-dropping. Lake Eola Park flooded out, the theme parks and the airport were all closed, and near UCF, residents of nearby apartment buildings were filmed using air mattresses as rafts, trying to salvage their possessions from the flood. Current estimates of damage statewide are at $12.6 billion, and that's not even counting the damage done by Hurricane Nicole a few weeks later. It's going to take a long time to get everyone affected by the storm back on their feet.

Orange County's pre-doomed rent control ordinance "passed" when well over half the voters agreed that rent hikes need to be controlled, but — no surprise — the law was smothered in its crib. The ordinance would have covered less than half of rental units in Orange County, limiting them to a year-over-year hike that was tied to the change in the annual Consumer Price Index. Its place on the ballot came only after a narrow vote of the Orange County Commission, following months of contentious debate. Orlando has seen some of the worst increases in housing costs in the country, but that didn't stop landlord/realty groups from successfully suing to block the ordinance. The Orange County Supervisor of Elections counted the votes, but the vote would ultimately not be certified.

Central Florida, home to the so-called "Most Magical Place on Earth," is one of the areas hardest hit by the nation's unaffordable housing crisis, exacerbated by the economic fallout of COVID-19 and zero enforceable limits on the ability of landlords to price-gouge renter households (see above). Workers at Disney World say they make "an unlivable wage" for the area's cost of living, and they've had enough. Amid ongoing negotiations for a new contract in December, union members marched to draw attention to their request for an immediate $3 hourly pay raise. Disney generated a revenue of nearly $83 billion this year — $28.7 billion in the company's theme park division alone — and Disney's castmembers would like a little trickle-down. Meanwhile, 2022 saw the first steps toward unionization for Starbucks workers: More than 264 of Starbucks' 9,000 corporate-owned stores in the United States have voted to unionize since last December, including one that's local. Starbucks workers at the East Mitchell Hammock & City Plaza location in Oviedo voted to unionize in August, becoming the first in Central Florida to do so.

Florida Republicans added four U.S. House seats in the 2022 elections — and the big boost they got from Daddy DeSantis' gerrymandering hijinks was a major driver. Gov. DeSantis pushed a radical redistricting map through the Legislature during an April special session, which was used in the elections amid constitutional challenges in federal and state courts. His plan was so aggressively rigged for the GOP that even the Republican-dominated Legislature balked at approving it, but DeSantis pushed it through anyway and kept the challenges tied up in court until after the elections. Rep. Carlos Guillermo Smith, a local leader who's been battling for LGBTQ and immigrants' rights in Tallahassee for years, lost his seat when he was shunted into a new, differently mapped district. DeSantis' office has publicly stated that partisan considerations played no role, but a ProPublica examination of how the map was drawn — and who helped decide its new boundaries — reveals a very different story. The investigative powerhouse said "new details show that the governor's office appears to have misled the public and the state legislature, and may also have violated Florida law."

The tragedy of Missouri teen Tyre Sampson falling to his death from the Orlando FreeFall ride at Icon Park is still unfolding, months later. Sampson fell from the ride this spring: While the drop tower was plunging riders toward the ground, his restraints failed to keep him in his seat and he was thrown, ultimately falling to his death in a horrific incident that was captured on a widely shared video. In the aftermath, the ride was shut down permanently and will ultimately be removed. Florida officials have investigated the incident and found that the ride's restraints were adjusted to allow the ride to operate outside manufacturer-supplied limits in height and weight. Outgoing Agricultural Commissioner Nikki Fried has levied permanent revocation of the ride's operation permit and a fine of $250,000 against the ride operators, Orlando Slingshot Group — a decision they are currently pushing back on.

Though the much-ballyhooed "red wave" predicted for the U.S. midterms in November was by and large a dud, that was not reflected in Florida's statewide elections. The Florida Democratic Party is perhaps the most inept state wing of our two-party system in the entire United States. In a state that is pretty evenly split between Republican and Democrat registered voters, the Dems managed to get absolutely trounced in the first election post-widespread banning of abortion rights. In the big races our own Val Demings lost handily to the genuinely unlikable empty suit that is Marco Rubio, and an out-of-his-depth Charlie Crist was vaporized by (sigh) Gov. Ron DeSantis. Locally, it was a mixed bag with a few progressive bright spots: Rep. Anna Eskamani was re-elected in her new District 42, and, perhaps most exciting of all, Florida sent a Zoomer to the U.S. Congress with the election of Democrat Maxwell Frost to represent District 10.

Forget guns, knives and fists. According to Florida police, their one true kryptonite is fentanyl. A Tavares officer shared a video of herself in December "overdosing" after a rogue wind blew some fentanyl her way. Though the video was widely debunked, the officer doubled down: "This is man-made fentanyl from street scientists," she said. (As opposed to fentanyl made by elves and fairies, we guess?) Add this to a ginned-up panic over fentanyl being secreted in Halloween candy and the Orange County Sheriffs Office's claims that even touching fentanyl makes officers overdose. For the last time: Fentanyl can be dangerous and is a major factor in drug overdoses in the U.S., mostly because it's being cut into other drugs. However, it also is a drug with practical purposes, and those suffering from legitimate chronic pain are being penalized by this hysteria.

The strange political career of former Seminole County tax collector Joel Greenberg ended when he was sentenced to 11 years in prison. During his stint in Seminole County, he used his position to stalk political rivals, run cryptocurrency operations with government funds, defraud COVID-19 relief programs, impersonate a police officer, and pay escorts for sex, including a woman who was underage at the time. A judge gave Greenberg the highest recommended sentence from prosecutors, noting that Greenberg's time in office was a "violation of the public trust." Though he could have faced much stiffer penalties, some leniency was granted due to Greenberg's willingness to incriminate other criminal Florida politicians and their associates: Greenberg was at the center of an investigation into Congressman Matt Gaetz (which seems to have fizzled out, however). Greenberg apologized during the hearing, telling the judge he feels "remorse for what I have done." Does he, though?

Orlando Museum of Art's controversial exhibition of "lost Basquiat paintings" started with a gala bang and ended with ... an FBI raid and the resignation of museum director Dr. Aaron De Groft (and later, several board members). It was a torrential downpour of other shoes dropping from the sky — each with a commemorative Basquiat sock stuffed inside — right over OMA and De Groft from almost the very day the exhibition opened in February, when the New York Times published a report questioning the authenticity of the works. The museum stuck to their guns over the exhibition in the face of a tidal wave of reports questioning the paintings' provenance (some you might have read in these very pages), until the FBI came a-knocking and confiscated the entire exhibit. (The subgenre of "paintings as flight risk" is a conceptual art movement we weren't ready for.) De Groft was kicked to the curb, and OMA board and staff were thrown into turmoil. We want to see OMA recover from this and ultimately thrive, but it will be a long road back to trust.

News reporter for Orlando Weekly, covering general news, local government, labor, housing, and other social and economic justice issues. Previously worked as a news anchor for WMNF in Tampa and a freelance journalist with works published in In These Times, Strikewave, Creative Loafing Tampa Bay, and Facing South...