With Dorian expected to become a Category 4 hurricane, all of Florida is now in a state of emergency 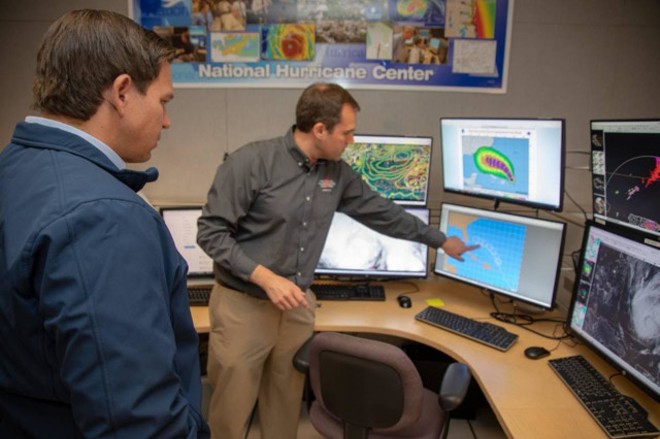 All 67 Florida counties are now under an emergency order as the state awaits a powerful hit, likely early next week, from Hurricane Dorian.

Gov. Ron DeSantis on Thursday expanded throughout Florida a state of emergency he had declared a day earlier in 26 counties along the East Coast and in some inland areas. The expansion came after DeSantis received updates on the storm during visits to the National Hurricane Center in Miami and the Brevard County Emergency Operations Center.

“This provides state and local governments ample time, resources and flexibility to prepare as the exact landfall location of Hurricane Dorian continues to fluctuate,” the governor’s office said in a news release announcing the executive order.

As the system’s northern movement slowed in the open waters north-northwest of Puerto Rico, the center said “it is too soon to specify where along the Florida East Coast the greatest impacts could occur.”

But Floridians are being advised to start carrying out their storm plans, as heavy winds, rain and flooding could occur across the state.

As the storm has slowed its crawl across the Atlantic, DeSantis said mandatory evacuations may begin Saturday.

“We will work with the Florida Department of Transportation so that if an evacuation is ordered, we’ll waive the tolls, we’ll do what we need to do on the roadways to make that effective,” DeSantis said Thursday afternoon at the Duval County Emergency Operations Center.

President Donald Trump announced from the White House Rose Garden that he will not make a planned trip to Poland because of the need to focus on Dorian. He is sending Vice President Mike Pence on the overseas trip this weekend.

“The storm looks like it could be a very big one indeed,” Trump said during a ceremony to mark the establishment of the U.S. Space Command.

Duke Energy, which provides electricity in parts of Central Florida, said it anticipates “damage to its infrastructure that may result in extended power outages.”

“We join state officials in asking everyone to take this storm seriously and prepare now. We also ask our customers for their patience,” Duke Energy Florida storm director Jason Cutliffe said. “With a Category 4 hurricane, power may take several days to restore.”

Similarly, Eric Silagy, president and CEO of Florida Power & Light, said his utility expects to see outages, though it has worked since 2006 to strengthen its grid. FPL provides electricity to much of the East Coast.

"FPL operates more than 48,000 miles of overhead power lines surrounded by millions of trees. Storms are nature's way of clearing debris, and as we saw with Hurricane Irma in 2017, it is likely that Florida's lush landscape will cause outages and restoration challenges," Silagy said in a prepared statement.

Wednesday’s executive order lifted restrictions on hours of service and truck weights for fuel trucks, due to reports of high demand for gas.

“There is a lot of fuel in Florida, it’s just when a gas station runs out, the trucks have to bring it in from the port,” DeSantis said Thursday afternoon.

The executive order allows mobilization of the Florida National Guard.

But “with a track like this, it’s uncertain where to deploy them,” DeSantis acknowledged after a briefing Thursday morning at the National Hurricane Center in Miami.

Mark Wool, a meteorologist with the National Weather Service in Tallahassee, warned people to make plans now as roads and hotels can quickly get clogged. The storm also will threaten during the traditional end-of-summer Labor Day weekend.

“The key message I want to get across to folks is that I know everybody has plans for the holiday weekend, but you need to stay on top of the latest updates,” Wool said. “There is still a wide range of model solutions out there. They are not converging yet. Models have the system going anywhere from Louisiana to Canada.”

State Emergency Management Director Jared Moskowitz said rather than getting fixed on tracking models that may bounce around, people along the East Coast should be planning for a Category 3 or Category 4 landfall.

“Continue to pay attention,” Moskowitz said. “I don’t want someone to say, ‘It’s going to spin off the coast’ and then they don’t go and make a plan. The only thing that has been consistent about the storm is its inconsistencies.”

The “cone of probability,” which offers a general idea of where the storm could make landfall, stretched Thursday afternoon from the central Florida Keys to south of Savannah, Ga., though it was centered on the East Coast of Central Florida.

Martin and Volusia counties have already announced school closings for Tuesday. Daytona State College, Valencia College and the University of Central Florida will be closed over the weekend through Tuesday.

Florida State University moved its Saturday football game against Boise State from Jacksonville to Tallahassee. Also, the state Department of Environmental Protection canceled its Blue-Green Algae Task Force meeting, which had been scheduled for Friday in Gainesville.